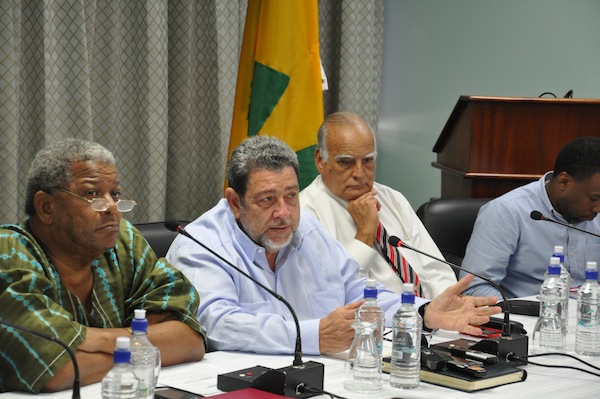 KINGSTOWN, St. Vincent, Dec 30 2013 (IPS) - Ralph Gonsalves fought to hold back tears as he shared how his cousin was killed the night before Christmas.

Raymond Gonsalves was buried alive when a slow-moving, low-level trough dumped more than 400 mm of rain on this island in a less than 24 hours and triggered massive flooding and huge landslides.

“People have lost their lives; families are suffering. I was with a family which lost five in one household,” Gonsalves, the prime minister of St. Vincent and the Grenadines, told IPS.

His cousin Raymond, he recounted, “was in his house, in the bedroom, and a landslide came down and buried him on his bed.”

“I have it in my family too,” he said. “I feel the pain, I feel the anguish of people.”

"Climate change...has to be given the prominence and the priority that it deserves."
--Baldwin Spencer, Prime Minister of Antigua and Barbuda

Gonsalves told IPS that St. Vincent and the Grenadines is “on the frontline of climate change”, explaining that his cousin had been among several the government moved from their homes beside the sea following Hurricane Ivan in 2004.

New houses were built for them but even then “the ravages of wave action were too severe, so we moved them to [another] place.” They had been moved, he said, “from one disaster point to another.”

The prime minister said that while the country is not a disaster area as a whole, several areas have been declared disaster areas.

Prime Minister Baldwin Spencer of Antigua and Barbuda, who serves as chairman of the Organisation of Eastern Caribbean States (OECS), a sub-regional grouping, arrived here on Saturday to see the destruction first-hand. He will also visit St. Lucia on Sunday.

The trough on Dec. 24 brought torrential rains, death and destruction not only to St. Vincent and the Grenadines but to St. Lucia and Dominica as well. Disaster officials in St. Vincent have so far recovered nine bodies, and the search continues for three more people reported missing and feared dead.

In St. Lucia, five people were killed, including Calvin Stanley Louis, a police officer, who died after a wall fell on him as he tried to help people stranded by floods.

Spencer told IPS he is convinced that there is a link between climate change, global warming and the erratic weather being experienced in the region.

“What has happened in these three member states of the OECS clearly demonstrates that the issue of climate change and associated weather issues can no longer be treated as a backburner issue,” he told IPS. “It…has to be a front burner issue and has to be addressed collectively.”

“I would say that this has to jolt all of us into the recognition that climate change is not something that we can continue to take lightly. It has to be given the prominence and the priority that it deserves.”

He hastened to point out that climate change has not skipped the attention of governments of the OECS.

“Policies and programmes have been developed in conjunction with regional and international bodies involved with this process to introduce…practicable measures,” he said. “But these devastating situations would urge us…to move more expeditiously in putting into place whatever is required to assist in combating the effects of climate change.”

Ronald Jackson, the executive director of the Caribbean Disaster Emergency Management Agency (CDEMA), said he could not give a scientific answer connecting climate change and the Christmas Eve storm, but he strongly believed climate variability issues and climate change issues were involved.

“There is going to be a change in the culture of how we deal with these things, how we monitor the meteorological information that is being presented because we are living in very uncertain times,” he said. 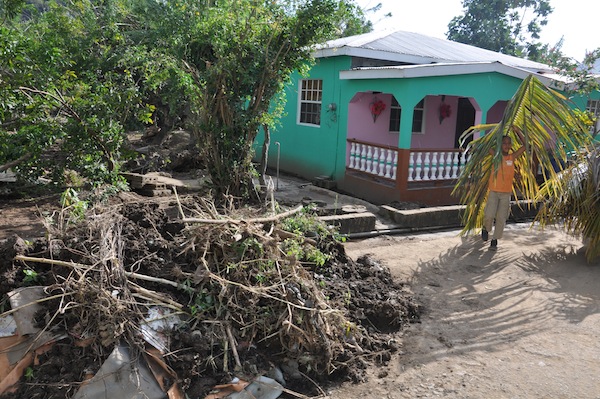 Gonsalves said that during a helicopter overview of the country’s forests, the minister of works and chief engineer observed massive landslides, rivers that had spread, and land that had been denuded.

“The extent of landslides suggests the figure of about 10 percent, which is a huge number,” he told IPS, adding that the practical implications of the landsides are huge as well. “If we are seeing these logs in the lower end of the river, you could imagine the damage which is caused in the upper end. If the logs are not cleared and if we don’t deal properly with river defences, we have a time bomb” where the next heavy rains will simply add to the buildup.

The capacity of the state to respond to a disaster of this magnitude it is not at the level it ought to be, Gonsalves added.

“There are profound limitations. In the ministry of social development, we just don’t have enough persons in that area to deal with the extent of the social problems which have arisen,” he told IPS.

Two decisions regarding immediate reconstruction were reached during a six-hour meeting at the prime minister’s office Saturday. They involved financial institutions, contractors, local and regional disaster management agencies, representatives of CARICOM, and the governments of Antigua, Barbados and Trinidad and Tobago.

The prime minister said all financial institutions have indicated that they will try to help provide the financing for the work to be done.

The island’s water authority has said that by Tuesday, the country should be up from what is now 50 percent of the population with access to water to 85 percent.

“The issue of the water is the most critical, immediate human need,” Gonsalves said. Even the country’s 42 water trucks “are still not enough to deal with the problem.”

“We will work to make our country better than it is and to use this challenging period to lift ourselves and to carry ourselves to higher heights,” Gonsalves concluded.