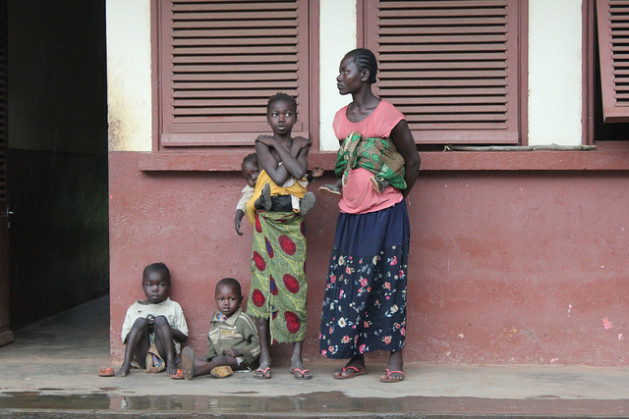 Patients wait at the Kaga Bandoro Hospital in Central CAR. An estimated 35 percent of the population is particularly vulnerable and in need of life-saving assistance. Credit: Gregoire Pourtier/cc by 2.0

UNITED NATIONS, Dec 6 2013 (IPS) - The United Nations Security Council voted unanimously Thursday to authorise the deployment of thousands of French and African Union troops in the Central African Republic but stopped short of approving a full U.N. peacekeeping force in the country.

The French-backed resolution came amidst increased violence in the capital, Bangui, where Christian militias unexpectedly launched repeated attacks, reaching as far as the Presidential Palace.

“The French were expecting to be asked to fight against Seleka, but now perhaps they will have to fight the anti-balaka as well.” -- Thierry Vircoulon

Medicins Sans Frontieres doctors in Bangui confirmed the presence of 50 bodies, bringing the number of casualties in the capital to at least 98. The BBC reported that a mosque in one of Bangui’s Muslim neighbourhoods was filled with victims of clashes.

And in Bossangoa, 300 kms north of Bangui, a standoff continued outside a Catholic church where an estimated 35,000 Christians have taken refuge. Local peacekeepers have attempted to head off attacks from Seleka units – the largely Muslim rebel group that ousted President François Bozizé in March – who claim armed elements are among the refugees.

France’s contingent of 600 troops already in the country is set to be doubled before the week is out and French President François Hollande announced from Paris that military operations would begin “immediately” to secure Bangui and major international roads that an estimated 400,000 refugees have used to flee the violence.

Yet with much of the violence taking place in rural areas, the peacekeeping force may not be able to reach all conflict zones.

At nightfall, Bangui was still nominally under the control of Seleka, but attacks throughout the day by “anti-balaka” Christian militias reportedly loyal to Bozizé caught residents and peacekeepers off guard.

Aware that French forces were expected to arrive shortly, the militias perhaps “wanted to take the opportunity to attack,” said Thierry Vircoulon, project director for Central Africa at the International Crisis Group.  “Now everyone is worried about night attacks by the anti-balaka.”

“The French were expecting to be asked to fight against Seleka, but now perhaps they will have to fight the anti-balaka as well,” Vircoulon told IPS.

But Djotodia’s September announcement that the rebel group would be disbanded set off a period of lawlessness and killings that culminated in Thursday’s Security Council vote.

The existing contingent of 2,500 regional peacekeepers in the country has been hamstrung by a lack of financing and disorganisation.

Since the capture of Bangui, the Seleka has been accused by international aid groups and the U.N. of deliberately targeting civilians.

Despite a post-independence history of conflict, the country has remained relatively free from the religious unrest that has plagued other Sahel nations.

But as Seleka reels from a concerted counterattack by militias, there are concerns that reprisals will mount against the country’s ever more defenceless Muslim minority.

One source close to the Security Council told IPS that the decision to hold off on a full-fledged “blue-helmet” U.N. mission came in part as a result of U.S. mission-fatigue and  a reluctance to finance another prolonged presence on the continent. Instead, the U.N. will set up a trust fund for donor countries.

In July 2014, when the Security Council will review progress in the country, it will have the option to convert the African troops into a U.N. peacekeeping force if the security situation has not been resolved.

But unlike France’s intervention in Mali earlier this year, the military mission in the Central African Republic is expected to be brief. Stabilising the country could require a long-term development presence that France and neighbouring countries may not be prepared to offer.

But the decision was also seen as lending confidence to the African Union, which will take over control of the regional force, now called MISCA, and increase its numbers from 2,500 to 3,500.

“It fits into this recent trend of trying to find African solutions to African problems,” said Evan Cinq-Mars, a research analyst at the Global Centre for the Responsibility to Protect. “That’s certainly something the African Union wants and the Security Council is interested in.”

The intervention is reminiscent of a similar French-supported mission that stabilised the Central African Republic in 1997.  Like Thursday’s resolution, the Security Council sanctioned deployment under Chapter VII of the U.N. Charter, but when the French grew tired of a prolonged mission, they reduced their operations in the country and the U.N. had to scramble to come up with a peacekeeping mission to augment weaker local forces.

“CAR suffers from neglect until intervention is needed,” Cinq-Mars told IPS. “And that’s a strategy that just can’t continue. Because I’m certain that these last-minute interventions cost more than making a significant investment in the Central African Republic now to ensure this is the last time the council has to deal with such a serious situation.”