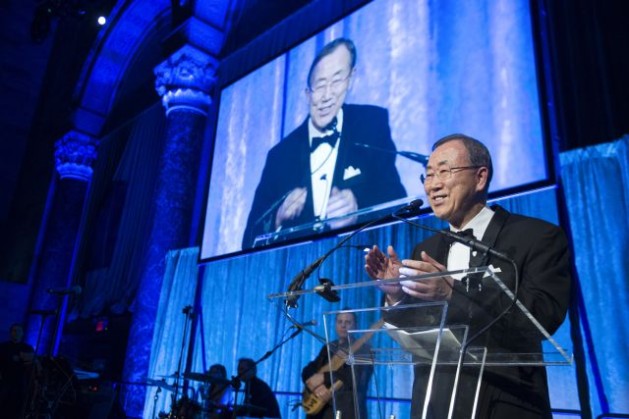 UNITED NATIONS, Dec 27 2013 (IPS) - When the U.N. Correspondents Association (UNCA) held its annual award ceremony last week, one of the video highlights was a hilarious skit on the clumsy attempts to bug the 38th floor offices of Secretary-General Ban Ki-moon.

"Let's hope the spirit of hopeless resignation is finally set aside and serious consideration given to privacy at the U.N." -- James Paul

These included the U.N. children’s agency UNICEF and the Geneva-based U.N. Institute for Disarmament Research (UNIDIR).

At last week’s award ceremony, the secretary-general was given an unsolicited piece of light-hearted advice: if you want to figure out whether your office is bugged, you only have to sneeze loudly, and a voice from inside the walls would instinctively and courteously respond, “Bless you.”

Not surprisingly, the resolution was co-sponsored by Brazil and Germany, whose leaders were wiretapped by the NSA.

Although both countries publicly lambasted the surveillance, the resolution does not single out either the United States or Britain by name.

“This was due to two reasons,” a Third World diplomat told IPS. “One, to ensure the resolution was adopted unanimously, with no negative votes and abstentions, and two, both Brazil and Germany were obviously under strong political pressure not to name names.”

As a result, he noted, the resolution was “lamentably weak – and the culprits got away.”

Asked for a response, the Brazilian ministry of external relations, through its public relations firm in New York, remained tight-lipped.

James A. Paul, who served for 19 years as executive director of the New York-based Global Policy Forum, told IPS it was long past due for this issue to be addressed at the United Nations.

“Electronic espionage has been especially abusively practiced in the U.N. environment and cases are very well known,” he said.

He pointed out that diplomats have been furious about this for years but many have been reluctant to take up the matter and risk the ill-will of the mighty, especially the United States and UK – “the prime offenders”.

“In addition to the resolution, let’s hope the spirit of hopeless resignation is finally set aside and serious consideration given to privacy at the U.N., where much needs to be done to bring the powerful into conformity with international law,” said Paul, who has written extensively on the politics of the world body.

Samir Sanbar, a former assistant secretary-general who was primarily responsible for the U.N. presence on the internet with the 1995 launch of the U.N. website, told IPS, “My general impression is that while political officials make public statements, security representatives arrange for discreet deals.”

And that may explain eventual changes in negotiated texts of the resolution, he said.

In certain circles, bugging was so common that a diplomat excluded from monitoring may have felt insulted, said Sanbar, who served under five different U.N. secretaries-general.

He recalled a long telephone conversation once between a former secretary-general and a pivotal head of state in the Middle East on the Arab-Israeli conflict.

After the call, the secretary general wondered with a wry smile: How many countries would have been listening [to our conversation]?”

He said on occasions even those directly involved resorted to public exposure when it suited them.

He said recent revelations have made it clear there is an increasing intrusion of states – particularly the U.S. – into the private lives of all citizens, not only those within their national jurisdictions but worldwide.

“This battle involves first and foremost public opinion. Citizens must bring pressure on states to end or at least greatly restrict these practices,” he said.

Paul pointed out that a U.N. resolution will not have a binding effect but it will be part of a shift of opinion.

A recent open letter by famous authors is also part of this process as is the initiative of top executives in the internet industry, he noted.

“The resolution may disappoint some who would like to see stronger language. But in fact this resolution is well-crafted to win broad support and thus to have the maximum moral authority,” he added.

In a statement released last week, the Brazilian ministry of external relations said it was “greatly satisfied” with the consensus resolution.

And it “demonstrates the recognition, within the international community, of universal principles upheld by Brazil, such as protecting the right to privacy and freedom of expression, especially against extraterritorial actions of States in regard to data collection, monitoring and interception of communications.”

The statement also noted the resolution was “innovative in affirming the recognition that the rights of citizens must be protected both ‘offline’ and ‘online’, and provides for steps to continue the dialogue and to deepen discussions over the coming months, at the United Nations, on the right to privacy in electronic communications.”

Meanwhile, the resolution requests U.N. High Commissioner for Human Rights Navi Pillay to present a report on “the protection and promotion of the right to privacy in the context of domestic and extra-territorial surveillance and/or interception of digital communications and collection of personal data, including on a mass scale.”

This report is to be submitted to the Human Rights Council and to the General Assembly in 2014, “with views and recommendations, to be considered by Member States.”

Virtually all of the revelations of electronic spying have been sourced to documents released by NSA contractor Edward Snowden, currently living in exile in Russia, and a fugitive from U.S. law enforcement agencies who have accused him of espionage.