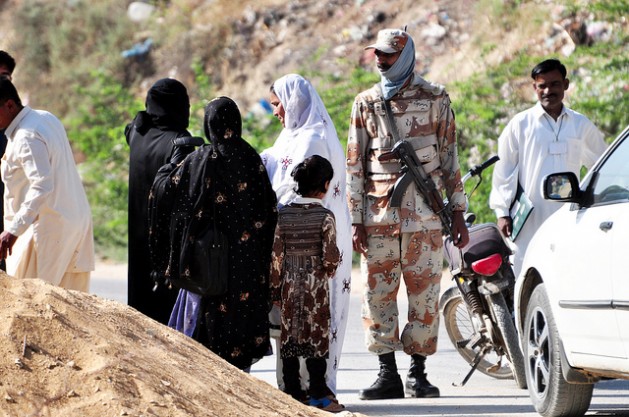 Neither the police nor the paramilitary forces have been unable to control targeted killings of aid workers in Karachi. Credit: Adil Siddiqi/IPS

WASHINGTON, Jan 23 2014 (IPS) - With the 2014 deadline for a U.S. withdrawal from Afghanistan in sight, analysts here are urging Washington policymakers to drop the term ‘Af-Pak’ and recognise the importance of Pakistan beyond its implications for Afghanistan.

U.S.-Pakistan relations have for too long focused on the Afghan security question, according to a new report from the Council on Foreign Relations (CFR), a Washington think tank. Such a focus, CFR researchers warn, neglects the high strategic importance Islamabad has for the United States in the region.

“Pakistan’s internal security is not something the U.S. can confront directly.” -- Daniel S. Markey

“U.S. policy in Pakistan has consistently been linked to Afghanistan and has fallen under the broader heading of Af-Pak – a label that has never been very popular in Pakistan and one that has also been seen as degrading,” Daniel S. Markey, a senior fellow at the CFR and author of the new report, told IPS.

“But as the U.S. is drawing down in Afghanistan and in many ways signalling a reduced commitment there, [it] ought to rethink its Pakistan strategy.”

Any new approach would need to have two main strategies, the report suggests. First, Washington will have to seriously engage with the security threats that it currently faces in Pakistan, including threats from terrorist organisations but also from Pakistan’s nuclear arsenal and its delicate relationship with India.

The first strategy, however, comes with its limits.

“Pakistan’s internal security is not something the U.S. can confront directly,” Markey said. “It’s Pakistan’s problem, and one that will require Pakistan’s political leadership directly.”

At the same time, the author notes that Washington can provide some assistance, such as equipment and training. This is a strategy Washington has used in the past, including in its assistance to Islamabad while fighting the Taliban.

Besides being difficult in practice, the limited role the United States can play inside Pakistan is also a consequence of the deep mistrust Pakistanis harbour towards Washington.

One of the recommendations highlighted by the report emphasises how U.S. assistance to Islamabad should be conditioned on a show of Pakistan’s true commitment to fighting terrorism.

“U.S. military aid to Pakistan should not be linked primarily to the Afghanistan war,” the report argues. “It should instead be conditioned on Pakistan’s effort to address internal security threats… and on Pakistan’s overall commitment to countering violent extremism on its soil.”

Indeed, the problem of mistrust may be one of the biggest hurdles the U.S. will have to overcome in order to achieve its long-term interests in the region.

“One of the reasons the U.S. doesn’t have much leverage inside Pakistan is that there’s a lot of mistrust and hostility between the two sides, particularly when it comes to the security establishment,” Michael Kugelman, senior programme associate for South Asia at the Wilson Centre, a think tank here, told IPS.

This mistrust, Kugelman notes, is the result of divergent views between Washington and Islamabad when it comes to defining a threat and how to respond to one.

According to analysts, the United States sees all militant groups as potential threats, urging for tough action regardless of the groups’ targets. But for the Pakistani leadership, the differences matter.

“Pakistanis tend to see some militant groups as more dangerous than others, especially those that target the government,” Kugelman said.

“The U.S. will need to lower its expectations and stop setting these very high goals of getting the Pakistani government to crackdown on all militants. That’s just not going to happen.”

Markey’s report also calls for the United States to look at Pakistan from an economic perspective, particularly in light of its relationship with India and China.

However, this does not mean that the U.S. should get involved in a mediation of the multiple disagreements that currently exist between India and Pakistan, Markey said.

“Rather, the U.S. should encourage both sides to realise the incentives of more bilateral integration,” he noted. “There is no other way in which Pakistan can find prosperity unless they link it to a more regional perspective.”

According to recent statistics, India-Pakistan trade today is slightly tilted towards India, with New Delhi providing more goods to Islamabad than vice-versa. Much of this is due to Pakistan’s limited home-grown resources when it comes to manufacturing and resource-extraction.

The Washington-based Centre for Global Development (CGD), a think tank, on Wednesday noted that the U.S. government could do more to improve Pakistan’s economy, including by supporting the efforts of the International Monetary Fund, World Bank and Asian Development Bank “to promote … Pakistani reform efforts”.

India and Pakistan have already begun working towards a normalisation of their trade relationship, with Pakistan currently a few steps away from eliminating a list that forbids it from trading certain goods with New Delhi.

Yet Kugelman again cautions against Washington playing too overt a role in its push for trade normalisation.

“Very quietly, subtly and away from the cameras, Washington can push them both to take a final step and ensure that the two can finally establish a MFN relationship,” he said, referring to the ‘most favoured nation’ status that countries assign to each other when they normalise trade in a mutually beneficial agreement.

Meanwhile, the U.S. government continues to evaluate its exit strategy from the 12-year-old Afghan conflict, as well as Washington’s evolving strategic vision in Central Asia following the withdrawal. This strategy, and its impact, is being examined intently in both Washington and Islamabad.

“Both sides are at the very least trying to make their way through the endgame in the war in Afghanistan,” the CFR’s Markey said, noting that Pakistani authorities have begun “to worry about what will happen once the U.S. leaves Afghanistan.”