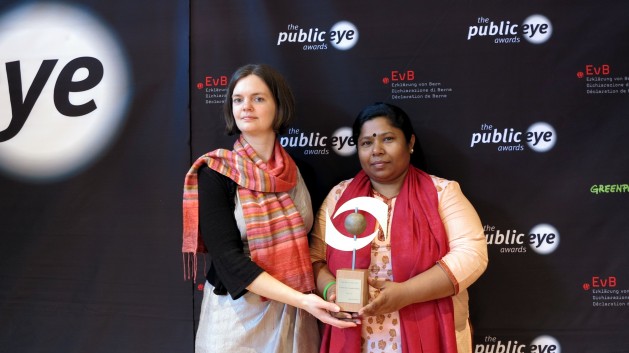 DAVOS, Switzerland, Jan 24 2014 (IPS) - As self-appointed global leaders gather at the World Economic Forum (WEF) in Davos and discuss ‘The Reshaping of the World’, a stone’s throw away non-governmental organisations named this year’s winners for their dreaded Public Eye Awards.

“Davos is the global showcase for symbolic policy where arsonists dress up as firemen for a few days.”

“Sadly, there’s still a need for campaigns like ours that demand corporate accountability,” Silvie Lang said on behalf of the organisers, the Berne Declaration (BD), a Swiss NGO working for equitable North-South relations, and Greenpeace Switzerland.

“We are here to remind the corporate world and those hiding behind closed doors in Davos that the social and environmental consequences of their business activities affect not only people and the environment, but also the reputation of their company.”

Participating in the WEF is no option for the BD. “This kind of inclusion is far less effective than fundamental critique from outside,” its spokesperson Oliver Classen told IPS. “Davos is the global showcase for symbolic policy where arsonists dress up as firemen for a few days.”

This year, international NGOs proposed 15 nominees for the two shame awards, ranging from Glencore Xstrata and BASF as representatives of the extractive industry to pesticide producers and the U.S. garment company Gap. The latter was eventually chosen for the jury award.

Gap declined to show up and receive the award. Instead, Kalpona Akter of the Bangladesh Centre for Worker Solidarity and Liana Foxvog of the International Labour Rights Forum (ILRF) collected the prize.

Akter, a relentless grassroots activist, is herself a former child garment worker. “I sewed clothing for multinational corporations and made less than 10 dollars a month for 450 hours of work,” she said. Today, the minimum wage in Bangladesh is 68 dollars a month. “Due to inflation, it’s not much more than I used to earn,” Akter said.

Her main concern isn’t the low wages, however. “When workers speak up with concern about safety risks, they aren’t listened to.”

Three years ago, 29 workers were killed in a fire at one of Gap’s Bangladeshi supplier factories. After that, labour groups and unions negotiated with Gap to put an end to the constantly climbing death toll in the garment industry.

In all 1,129 Bangladeshi workers died in a deadly fire in a garments factory last year.

In a press statement, Gap stressed that it is a founding member of the Alliance for Bangladesh Worker Safety: “The Alliance is a serious and transparent, binding commitment on the part of its members to make urgent improvements to worker safety in Bangladesh.”

For Foxvog, the Alliance is “hardly more than a facelift.” She vowed to take the award directly to the Gap headquarters in San Francisco.

“We don’t want the companies to leave our country,” Akter said. “We want jobs, but they must be jobs with dignity. Global corporations must stop profiting off this low-road system.”

A third of the 280,000 people taking part in the online voting chose the energy giant Gazprom for the people’s award. That was not surprising, as the company had been in the spotlight for the past few months.

In September, Russian security forces arrested 28 Greenpeace activists and two journalists during a protest against oil drilling at their offshore platform Prirazlomnaya. In December, Gazprom became the first company that started to drill oil in the Arctic.

According to Greenpeace, Prirazlomnaya is far from some ultra-modern drilling unit. The absence of a publicly available and convincing response plan for any oil spill in one of the world’s most extreme environments worries activists deeply.

Greenpeace argues that Gazprom’s reliance on traditional clean-up methods would simply not work under icy conditions.

IPS requested Gazprom to comment on receiving the anti-award for “irresponsible business conduct at the cost of people and the environment.” Gazprom spokesperson Sergey Kupriyanov did not elaborate on its response plan, but stressed that the company was fully committed to the highest ecological standards.

“Therefore we are quite puzzled by the decision of the Public Eye Awards jury which seems to be motivated by anything but ecological concerns,” Kupriyanov told IPS.

He said that the Prirazlomnaya platform had been specifically designed for operation in the most hostile climate. “The applied drilling techniques prevent subsurface water pollution and the mixing of drilling and production waste with sea water.

Greenpeace’s Naidoo said his organisation considered calling for a boycott of Gazprom and its partner Shell, who had last year received an anti-award in Davos. “Our peaceful protest in the Arctic raised a lot of awareness,” he told IPS. “About five million people have signed up for our Arctic campaign, while the best of it is yet to come.”

Using the shame award to raise further awareness may be easier for the organisations dealing with Gap, as its consumer base differs much from that of Gazprom. Nobody depends on Gap clothes, but many depend on Gazprom’s oil and gas.

Criticising the energy giant my fall on deaf ears. “Even Gazprom, Rosneft or Chevron aren’t completely immune from public pressure though,” argued Naidoo. He said that these companies had so far ignored one thing: “Relations and reputation are a capital which is just as important for success as conventional capital.”