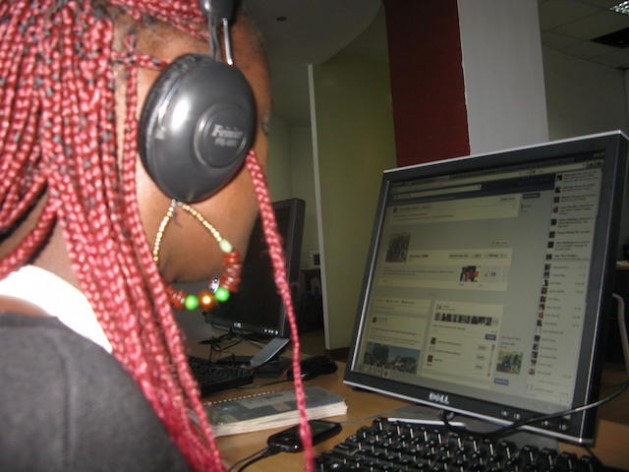 A teenage girl surfs the internet at a resource centre in Nairobi. But cyber crime and bullying against Kenyan women is on the rise. Credit: David Njagi/IPS

NAIROBI, Jan 30 2014 (IPS) - For a seasoned politician like Kenya’s Rachael Shebesh, few things hold her back from rallying for women’s rights. But when it comes to furthering her platform on social media – it is the one thing that this Nairobi County women’s representative avoids.

Like all women hooked on technology here, this hardliner politician has not been spared the muck of cyber bullying.

She has endured demeaning attacks suggesting that she is a feminist “not fit for leadership” and also comments full of sexual innuendo on social media sites.

Kenya’s office of the Director of Public Prosecutions acknowledges that women who are victims of cyber crime and bullying very rarely report the crime.

“Cyber crime [and bullying] is targeting everybody. I am a politician and I know we get targeted and that is why I keep off social media,” Shebesh tells IPS.

According to the Kenya ICT Action Network (KICTANet), a multi-stakeholder platform for people and institutions interested and involved in ICT policy and regulation, cyber crime and bullying against Kenyan women is on the rise.

There have also been cases of professional sabotage, identity theft and incidents where intimate photos and videos have been used to blackmail women.

“They seem to go hand-in-hand with women and girls’ lack of knowledge of the risks and the extent of the damage that they continue to sustain through cyber crime,” says a KICTANet report released in June 2013 titled, “Women and Cybercrime: the Dark Side of ICTs”.

This East African nation lacks legislation to police cyber crime. Last year, the Business Daily Africa reported that the country’s cyber security remained one of the weakest in the world and that experts were able to “intercept [mobile phone] voice traffic and obtain temporary secret keys for some subscribers, revealing the high level exposure.”

Currently, Kenya’s laws are unable to effectively prosecute cyber crime and online hate speech. This is why the Kenya Internet Governance Forum Steering Committee (KIGFSC) is now pushing for the draft Cyber-Crime and Computer Related Offences Bill 2014 to be signed into law. The draft will only be presented to parliament in March.

KIGFSC chairperson, Alice Munyua, tells IPS that the legislation is expected to protect all Kenyans, but there is a need to specifically protect women from cyber attacks.

However, not everyone is convinced that Kenya can deliver on this legislation. The Communication Commission of Kenya (CCK), the agency charged with drafting the bill, refuses to share details of the legislation with the public.

And the International Association of Women in Radio and Television (IAWRT) believes that Kenya should first engage in finalising the African Union Convention on Cyber Security, which covers issues of e-transaction, cyber security, personal data protection and combating cyber crime.

According to IAWRT, once African countries become signatories to the convention, they will be bound by international law to have their own legislation in place.

“The convention is expected to serve as a blueprint and guide countries to develop cyber security legislations,” Grace Githaiga, IAWRT vice-chairperson, tells IPS.

Githaiga says that the convention was originally meant to have been signed this month, but the process was postponed until June because of Kenya’s involvement with the International Criminal Court (ICC).

Kenya’s President Uhuru Kenyatta and his deputy William Ruto have been charged by the ICC for crimes against humanity, which occurred during the country’s disputed 2007 elections. Ruto is already on trial while Kenyatta’s case has been postponed.

However, the Kenya Police Service insists that cyber violence against women is classified as a serious crime.

“Officers have been trained on cyber investigation at the Criminal Investigation Department and are well equipped to handle such cases,” Marcela Wanjiru Andaje, the superintendent of police in charge of community policing, gender and child protection, tells IPS.

However, Kenya’s office of the Director of Public Prosecutions (DPP) acknowledges that  women who are victims of cyber crime and bullying very rarely report the crime. The DPP receives more cases of child pornography than ones of cyber crime and intimidation against women.

But Shebesh believes that government agencies like the CCK and the Kenya Police Service can easily contain this emerging crime.

But, she says, the process of seeking justice is too lengthy for anyone’s comfort.

“Today, if you want to catch someone who has abused you through social media you can. But you have to go through a process that is too taxing for the ordinary Kenyan and so they normally leave it,” says Shebesh.