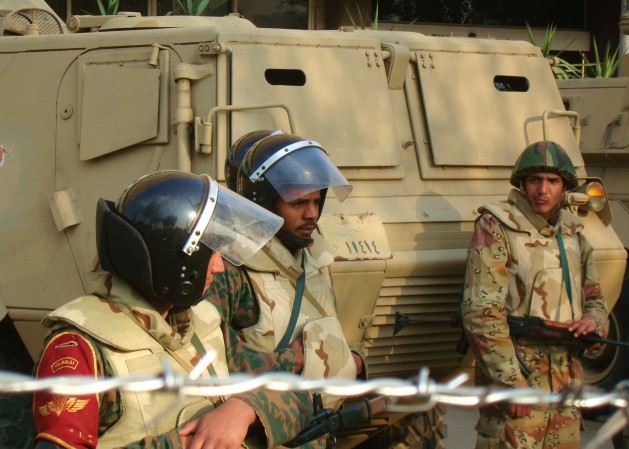 CAIRO, Jan 9 2014 (IPS) - A draft constitution set to go before a public referendum next week gives the military more privileges, enshrining its place as Egypt’s most powerful institution and placing it above the state.

The new text, set to replace the constitution drawn up in 2012 under Islamist president Mohamed Morsi, has stoked fears that Egypt’s military leadership is pushing to consolidate its power and protect its political and economic interests.

“The powers conferred to the army (in the draft constitution) lay the foundation for a military dictatorship,” warns Tharwat Badawi, professor of constitutional law at Cairo University.

“The powers conferred to the army lay the foundation for a military dictatorship."

The new charter was drawn up by a 50-member committee appointed by the military-installed government that has ruled since the army ousted Morsi in July 2013.

The document is seen as an improvement over the constitution passed under Morsi’s Islamist majority, which was widely criticised for its emphasis on Islamic law and curbs on personal freedoms. But legal experts have expressed concern over articles that diminish the role of representative government.

“If passed, the elected president and parliament would have no real authority over the military, which would in effect become a state unto itself,” Badawi told IPS.

Under the new constitution, the Supreme Council of the Armed Forces (SCAF) holds final authority over the selection of the country’s defence minister. Badawi says the article will strip the elected president of the right to choose a defence minister, putting the military above any effective civilian oversight.

“By this way the military will not be accountable to the head of state, or the people,” says Badawi. “And this is very dangerous.”

Critics say Egypt’s military has repeatedly trampled rights and thwarted democratic change since the popular uprising that toppled the authoritarian regime of former president Hosni Mubarak three years ago. The new charter could serve to further insulate the armed forces from challenges by revolutionary activists and elected officials.

Rights watchdogs were disappointed to discover that an article upholds the widely condemned practice of trying civilians in military courts. At least 12,000 civilians were arrested and tried without due process in military courts in the months following the 2011 uprising.

Ahmed Maher, leader of the April 6 Youth Movement, denounced the article on military trials, calling its inclusion “treason” on the part of the 50-person drafting committee.

“Those who support military trials [of civilians] and forgot what happened in 2011 have sold their conscience and followed personal interests,” he wrote on his Facebook account.

Maher was sentenced last month to three years’ hard labour for organising an unauthorised protest against the committee’s attempt to enshrine military trials of civilians in the constitution. He was among the first to be incarcerated under a new law passed by the military-installed interim government that requires protesters to seek permission to hold public demonstrations.

As a concession to rights campaigners, the draft constitution is more limiting than previous charters on the types of cases for which civilians could find themselves before a military court. But it still allows the military judiciary to preside over disputes between civilians and army personnel in ‘military zones’.

“In Egypt, the military is so deeply entrenched that just about anywhere can be considered a military zone,” says Badawi.

The new charter fails to ensure any level of transparency for the military’s economic activities. According to the text, the budget of the armed forces will not be subject to parliamentary supervision, placing its allocations and expenditures at the sole discretion of the military leadership.

The same clauses shield the Egyptian military’s vast economic empire, estimated to account for between 10 and 40 percent of the economy. Military-owned companies engaged in everything from construction to macaroni production enjoy the benefits of free land, full tax exemption, conscript labour, and no obligation to report their balance sheets.

“Given the degree to which the military has penetrated the state, the state is more or less at its service,” says Robert Springborg, an expert on Egyptian military affairs. “The (armed forces) has access to state resources without any oversight or accountability.”

This appears unlikely to change. Egypt’s army has grown in popularity since removing President Morsi and cracking down on his supporters in the Muslim Brotherhood. Analysts say it would be extremely difficult for anyone to challenge the powers granted to the armed forces in the new constitution.

Mohamed Mousa, a prominent member of the Al Dostour (Constitution) Party, says it is unfortunate, but the upcoming referendum is seen more as a vote of support on the July 2013 coup than on the constitution itself.

Egyptians who denounce military rule are still likely to vote in favour of the draft constitution, viewing a nod to pass the new charter as a strike against Morsi and the Muslim Brotherhood.

“We have concerns about the draft constitution, especially on some of the articles addressing military trials of civilians and the powers of the army,” says Mousa. “However, we are trying to deal with it as a package, and find it acceptable overall.”