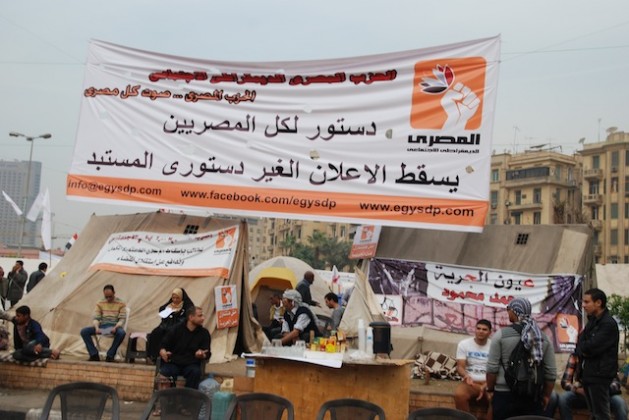 CAIRO, Jan 27 2013 (IPS) - Hundreds of thousands hit the streets countrywide on and after the second anniversary of Egypt’s Tahrir Square uprising Jan. 25 to protest the policies of President Mohamed Morsi and the Muslim Brotherhood from which he hails. A chief demand was the abrogation – or modification at least – of Egypt’s newly-approved constitution.

“The amendment of the new constitution is one of the primary demands of the people and parties taking part in anniversary rallies,” Magdi Sherif, head of the centrist Guardians of the Revolution Party told IPS from Cairo’s Tahrir Square. “President Morsi and the Muslim Brotherhood must heed the voice of the opposition.”

Egypt’s new national charter was approved last month in a contentious popular referendum – although not by the wide margin its mostly Islamist authors had hoped for. Despite its tepid reception by voters, only 64 percent of whom voted in favour, the new constitution formally went into effect immediately following the referendum.

According to Egypt’s secular opposition, the charter is deeply flawed. The six-month drafting process that preceded the referendum was dogged by controversy, culminating in the last-minute withdrawal of most non-Islamist members of the 100-member drafting committee.

Critics say the document fails to guarantee press freedom and free expression and concentrates too much power in the hands of the presidency. Nor, they say, does the charter adequately safeguard judicial independence or do away with Egypt’s longstanding practice of trying civilians in military courts.

“The new constitution employs very broadly-defined terms that could lead to restrictions on freedoms and the violation of basic rights,” Gaber Gad Nassar, constitutional law professor at Cairo University told IPS. “It also contains several articles that could theoretically allow the president to assume dictatorial powers.

“By broadening presidential authority, the charter allows the executive to dominate other branches of government,” Nassar added. He pointed to one article in particular granting the president the right to appoint members of Egypt’s High Constitutional Court (HCC).

Last summer, the HCC ruled Egypt’s first post-Mubarak parliament ‘unconstitutional’ on a technicality. The ruling led to the dissolution of the assembly – three quarters of which had been held by Islamist parties, chief among them the Muslim Brotherhood.

According to the Brotherhood and Morsi supporters, the HCC remains stocked with judges appointed by – and therefore loyal to – the ousted Mubarak regime.

Nassar also blasted the new constitution for allowing journalists to be arrested for certain press-related offences, and for allowing civilians to be tried by military tribunals if they are charged with “violations against Egypt’s armed forces.”

In a reference to the Muslim Brotherhood, Nassar (who says he is unaffiliated with any political parties or groups) added: “Those currently governing the country are carrying out their own agenda. Their lack of vision is deepening the political divide and they refuse to heed the opposition’s objections to the new constitution.”

Yet Murad Ali, official spokesman for the Muslim Brotherhood’s Freedom and Justice Party (FJP), insists that the FJP is – despite accusations to the contrary – “entirely prepared to hear and respond to other political forces’ reservations about certain constitutional articles.”

According to Ali, opposition forces currently in talks with the presidency are demanding the amendment of 15 articles. “And while some of the requested changes are reasonable, others are not,” he said.

For example, he said, certain political forces were demanding the elimination of an article barring former leading members of Mubarak’s now-defunct National Democratic Party from political participation. “But this is unreasonable,” Ali asserted. “Neither the Egyptian people nor the FJP will allow former NDP bigwigs to re-enter politics.”

Ali went on to say that the opposition had exaggerated the “expanded powers” allegedly given the president in the new constitution. “A careful reading of the charter will reveal that presidential authority has actually been reduced from the previous 1971 constitution.”

He added, however, that all other contentious constitutional articles – such as those dealing with personal freedoms, judicial independence and presidential oversight – “remain open to debate with other political forces with a view to reaching a compromise.”

The anti-constitution camp has coalesced around the National Salvation Front (NSF) led by former head of the International Atomic Energy Agency (IAEA) Mohamed ElBaradei and presidential candidates Amr Moussa and Hamdeen Sabbahi. In its opposition to Morsi, the Brotherhood and the new constitution, the NSF has produced strange bedfellows, uniting liberal, leftist and ‘revolutionary’ groups with supporters of the former regime.

On Monday (Jan. 21), the presidency invited opposition representatives to a ‘national dialogue’ to discuss their proposals for constitutional amendments. Although shunned by the NSF, the dialogue was attended by representatives of certain opposition parties, civil society and Egypt’s three main Christian churches (Coptic Orthodox, Catholic and Evangelical).

Two days later, church representatives – along with those of some political parties – withdrew from the initiative, saying discussions had been “unproductive” and had “failed to yield the desired results.”

For Nassar, the walkout came as no surprise.

“Why should they stay? Conclusions reached by the so-called dialogue committee aren’t binding,” he said. The Shura Council, the upper house of Egypt’s parliament (currently endowed with legislative authority), he noted, “isn’t obliged to implement the committee’s recommendations.”

Nassar added: “Popular pressure and demonstrations are the only means of obtaining a balanced, democratic constitution that reflects the will of the people and the goals of the revolution.”

The FJP’s Ali criticised those who withdrew from the dialogue session, describing the move as “dictatorship by the minority.”

“Parties and groups that represent the 36 percent of the public that voted against the constitution cannot simply walk out when all their demands aren’t met,” he said. “Dialogue is intended to lead to compromise; it’s not a matter of one side making all-or-nothing demands of the other.

“The majority of Egyptian voters approved the national charter. And the choice of the majority must be accepted.”

Morsi, for his part, has repeatedly promised to reopen debate on proposed constitutional amendments in the first session of parliament’s lower house, following legislative elections expected some time in April. The offer, however, appears to have been forgotten in the violence and chaos witnessed on the revolution’s second anniversary. (END)