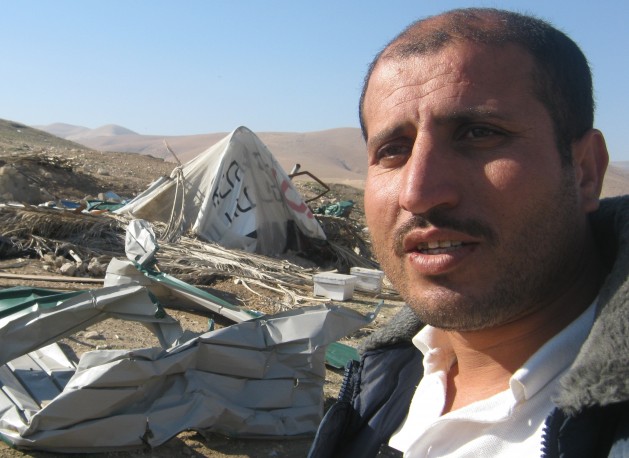 JORDAN VALLEY, Israeli-occupied West Bank, Jan 13 2014 (IPS) - Israeli settler Gadi Blumenfeld distributes machetes to 15 Palestinian labourers and instructs them to cut the thorns off of his dates’ fronds. “I might be stabbed in the back,” he says, “but thanks to farming, we keep the area safe from terrorists.”

Yet the fate of this arid strip of land that is home to 56,000 Palestinians and 7,000 settlers is uncertain as the rain.

A U.S. blueprint of a framework agreement for a two-state solution is said to put an end to Israel’s settlement enterprise in the Jordan Valley but to maintain an Israeli military presence for 10 years – contingent on the capacity of the future Palestinian state to protect not just itself, but Israel.

“For this paradise on earth, we pay a heavy price. Settlements and military bases control our land."

Meanwhile, Blumenfeld prides himself on his dates – “fruit of our brains and their hands.” Israeli minds and Palestinian hands, he means.

Like Blumenfeld, Palestinian landowner Ameen Al-Masri, whose orchards are just a few kilometres away, is proud of his dates – “the mothers of the valley’s dates.” His farmland, he says is “Palestine’s most fertile off-season cash crops area.”

He owns the same amount of arable land as Blumenfeld. “For this paradise on earth, we pay a heavy price. Settlements and military bases control our land,” stresses Al-Masri.

After Israel captured the valley from Jordan in the 1967 Six-Day War, tracts of land were expropriated from Palestinian farmers and allocated to settlements and military camps.

A segment of the Great Rift Valley, the Jordan Valley holds 28.3 percent of the West Bank’s land, and is the largest single Palestinian territory under full Israeli military and administrative rule, classified as Area C since the 1990s.

Only built-up areas – 13 percent of the valley – are under Palestinian rule, known as Area A.

Israel controls all the passages between it and the West Bank, and the border crossings on the Jordan River, the international border between the West Bank and Jordan.

Allenby Bridge is the only crossing to Jordan open to Palestinians from the West Bank.

“The Jordan Valley is a strategic buffer zone between a Palestinian state and Jordan. It must be kept under Israeli sovereignty because it prevents Jihadists, Al-Qaeda, Salafis from infiltrating Israel,” argues David El-Haiiani, head of the Jordan Valley Regional Council, which includes 21 Jewish settlements.

On Dec. 29, days before U.S. Secretary of State John Kerry’s visit to the area to seek approval for his framework agreement, the Israeli government approved a right-wing legislator’s bill which, if voted in parliament, would annex the Jordan Valley’s settlements and access roads to them to Israel.

Palestinians reject any Israeli presence, military or civilian, in the valley.

“If we agreed to a 10-year military presence here, [Israel’s Prime Minister] Benjamin Netanyahu would find an excuse on the ninth year to expand it for another 10 years,” is Al-Masri’s calculation.

Blumenfeld also farms a 200-dunam orchard in the closed military zone that lies between the electronic fence and the Jordan River. “Palestinian workers aren’t allowed in,” he notes.

Though Israel signed a peace treaty with Jordan in 1994, anti-personnel landmines are strewn along the fence.

In the late 1960s, the jagged terrain was dubbed “the land of hot pursuits” against Palestinian guerrillas.

Now peaceful, the no-man’s-land is a land of wolves and wild boars, of sentry boxes, outposts and trenches – of sentinels left behind in a distant past.

“We didn’t come here for ideological reasons, but to farm and secure the area. We’re farmers, not politicians,” says Blumenfeld.

“I’m a peaceful man, a farmer,” Al-Masri concurs. “Yet farmers fight for their land.”

Many Palestinians living here are semi-nomadic sheepherders and seasonal farmers. Most are wretchedly poor; most work land they don’t own.

Sheepherder Ayman eDeis is homeless. His shack and sheep enclosure were demolished twice this year – last time just before winter.

“The Israeli authorities won’t give you a permit, not in a lifetime,” he says, standing on the rubble of his home.

Israel counters that the dearth of building permits stems from the valley being a sensitive security area.

A water reservoir is under construction in the closed military zone to increase the irrigation capacity of four Israeli reservoirs and 12 artesian wells.

Settlers get sweet water from the West Bank’s deep aquifer, from the Jordan River, from flash floods.

Palestinian farmers wait for the rain, making use of the seasonal Ein Shibli spring and four licenced artesian wells. They can dig only 400 metres deep into the shallow aquifer, where water is saline.

In 2013, settlers produced 11,000 tonnes of dates, mostly for export. Palestinians produced 2,000 tonnes, mostly for local and Israeli markets. “The best business in the world today is the occupation,” says Al-Masri.

A World Bank report estimates that if Palestinians could exploit Dead Sea minerals in the southern Jordan Valley, their economy would derive up to 918 million a year.

Access to more farmland and water would deliver a further 704 million dollars to the economy. The Jordan Valley could become a Palestinian breadbasket.

“I don’t want a state on paper where Israel controls our resources and borders,” says Mahmoud Daraghmeh, an unemployed Palestinian engineer who sows yellow beans in his family plot. “This isn’t freedom. This isn’t a state.”

Blumenfeld watches the myriads of migratory starlings freely overlooking the border. “I love this valley,” he exclaims.

“Yet for a real peace agreement which the whole world guarantees; for the end of terror – because in the past, terrorists took control of territories Israel evacuated – for end of conflict, I’m willing to pay the price.”