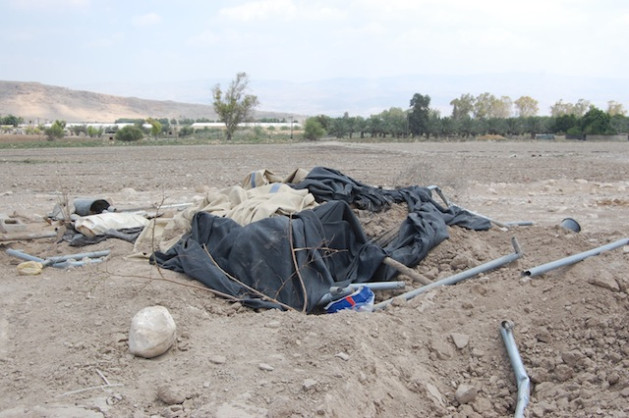 All that remains of a house demolished in Al-Jiftlick village in the Jordan Valley. Credit: Jillian Kestler-D’Amours/IPS

JIFTLICK, Occupied West Bank, Sep 14 2013 (IPS) - In the Jordan Valley, contrasts are stark. Lush green agricultural fields and fenced-in greenhouses belong to the Israeli settlements that dot the landscape and benefit from the area’s abundant water supply on one hand. On the other, Palestinian farmers denied access to their lands and other resources by the Israeli authorities struggle to cultivate the most basic crops and make a living wage.

“It’s a struggle for the farmers,” Palestinian farmer Ahmad Said Moahri told IPS from his home in Jiftlick, a Palestinian village in the Jordan Valley. “The farmers lose money sometimes by farming the land, but they cannot leave or Israel will take it.”

The 46-year-old owns 47 dunams (47,000 square metres) of agricultural land in Jiftlick. He harvests vegetables – eggplant, tomatoes, zucchini, and more on 27 dunams, and rents the remainder to another local farmer.

While Moahri earns between 15,000 to 20,000 shekels (4,200 to 5,600 dollars) annually through farming, he said that for five months each year, between September and January, he takes on a second job to support his family: packaging Israeli dates at a factory in Massu’a, an illegal Israeli settlement near Jiftlick.

“I love the land and our home is here ... There is not a day that I won’t visit, or look at, or take care of my land.” -- farmer Ahmad Said Moahri

According to a report published by the Maan Development Centre, 1,800 dunams are allocated to agriculture in Massu’a, and the settlement produces eggplant, pepper, zucchini, cucumbers, watermelons, melons, and dates.

“The geographical location of settlements in the Jordan Valley has been determined by the important potential agricultural growth in the region. In addition, these agricultural settlements were established and maintained as export-oriented settlements,” Ma’an reported.

The Jordan Valley constitutes nearly 30 percent of the West Bank; 87.5 percent of this area is located in Area C, which falls under complete Israeli military control. Today, some 9,300 Israeli settlers and 65,000 Palestinians live in the Jordan Valley.

Palestinians are prohibited from accessing almost 95 percent of Jordan Valley, as half the land is being used by Israeli settlements, and the Israeli army declared another 45 percent as closed military zones, which are off-limits to Palestinians.

The Jordan Valley is known as the Palestinian breadbasket, as most of the West Bank’s arable land is located there. In a 2010 report, the World Bank stated that if Palestinians could access 50,000 more dunams of land and additional water resources in the area, they could earn approximately one billion dollars annually.

This economic potential is not lost on Palestinian, or Israeli, leaders.

As the “peace talks” between Palestinians and Israelis continue, the Palestinian Authority (PA) leadership has once again stated that the creation of a Palestinian state is impossible without control of Jericho and the Jordan Valley. “We are committed to that. We have said that more than once,” PA President Mahmoud Abbas said on Aug. 16.

The Israeli government, on the other hand, views the Jordan Valley as an important security buffer separating it from Jordan, and provides generous economic support to its settlements and settlement industries operating in the area.

In contrast, the PA government in Ramallah has done very little to support Palestinians in the Jordan Valley. The PA has never allocated more than one percent of its budget to the agricultural sector, and between 2001 and 2005, over 85 percent of that budget went to paying PA salaries.

“The support we get as farmers in the Jordan Valley is less than what we need. The government does not care about the agricultural situation. Agriculture was damaged because the (Palestinian Authority) neglected it. They didn’t change their strategy,” Moahri said.

Moayyad Bsharat heads the Jericho office of the Union of Agricultural Work Committees, which supports Palestinian farmers in the West Bank and Gaza Strip. He told IPS that because it is bound by the Oslo Accords agreement of the early 1990s, the PA is unable to support the most marginalised Palestinian farmers working in Area C.

“The first (solution is) to end the Oslo agreement. The solution in the Jordan Valley is political, 100 percent. We are talking about rights. The farmers want to go to their natural resources – the land, the water and the cultivation – and these things will not be done on the ground without a big political solution,” Bsharat said.

In the meantime, Israel aims to force Palestinians to leave the area, and exploits the resources and economic potential of the Jordan Valley, Bsharat added.

“The Israeli settlements have three million palm trees in the Jordan Valley, which gives yearly millions of shekels to the Israeli government. They have the grapes, flowers… all these things are exported. It gives it a lot of national income for Israel,” he said.

For farmer Ahmad Said Moahri, making a living from agriculture in the Jordan Valley is a struggle, but he sees his work as a form of resistance.

“I love the land and our home is here. For this reason, I cannot leave the land. There is not a day that I won’t visit, or look at, or take care of my land.”