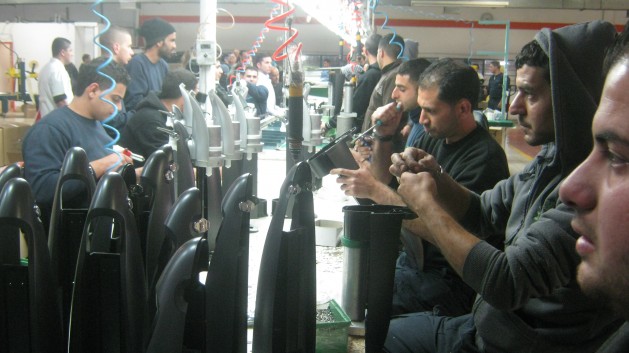 Settlements are considered a violation of international law. In Israel, they aren’t. And so, more often than not, consumers of Israeli products across the world do not know whether they’re purchasing a product made in Israel proper or in a settlement.

This blurring of borders and labels by Israeli businesses trading on land, which the Palestinians envision as part of their future state, and the ensuing calls for boycott, have entrapped a Hollywood star in the nitty-gritty of the conflict, and in a conflict of interest.

Till recently, Scarlett Johansson doubled as charity ambassador for the British NGO Oxfam and as brand ambassador for SodaStream, an Israeli soda maker company listed on NASDAQ whose main manufacturing plant is established on an old munitions factory near the settlement Ma’aleh Adumim.

Her praise of the soda makers, carbonators, eco-friendly bottles and syrup flavours went viral even before the commercial was aired during the Super Bowl.

Oxfam, which opposes trade with settlements, pressed her to recant her support for SodaStream, but she instead resigned from Oxfam.

In a statement, Johansson extolled SodaStream’s commitment to “building a bridge to peace”, in that 500 Palestinians, 450 Israeli Arabs and 350 Israeli Jews are “working alongside each other, receiving equal pay, equal benefits and equal rights.”

Palestinians earn twice to three times as much working on the SodaStream assembly line than they would in the Palestinian Authority.

“After decades of systematically destroying Palestinian industry and agriculture and imposing extreme restrictions of movement preventing many from reaching their workplaces, Israel has forced tens of thousands of Palestinian workers and farmers to seek jobs in illegal Israeli colonies.”

“We’re an anomaly,” acknowledges SodaStream CEO Daniel Birnbaum, who describes himself as an ardent supporter of the two-state solution. He hastily invited foreign journalists on a tour of the controversial manufacturing facility.

He strikes a pose of self-righteous indignation at the BDS movement and on “why providing employment is an obstacle to peace.”

“If this area ends up as part of Palestine, I have no problem paying taxes to the Palestinian government,” he says, while commending Johansson’s “heroic stance”.

But, Barghouti tells IPS, “Through popular civil resistance and sustained BDS efforts, as against apartheid South Africa, Israel will be compelled to recognise our rights under international law and end its regime of occupation, colonisation and apartheid.”

In recent days, Nordic institutions decided to cut off their ties with Israeli companies involved in the construction of settlements or that maintain branches in the occupied West Bank and East Jerusalem.

While the scientific agreement “Horizon 2020” recently signed by Israel and the European Union bans European funding to academic research carried out in the settlements, now Germany, Israel’s strongest European ally, reportedly intends to widen the ban to private companies operating in the occupied territories.

In July last year the European Commission, the executive arm of the EU, released new guidelines forbidding EU institutions from providing grants or loans to Israeli organisations with ties to settlements.

Barghouti emphasises the rise in support for the academic boycott of Israel in the U.S. and Ireland, and the growing number of western artists who refuse to perform in Israel.

The CEO of the fizzy drink company seemed unfazed by the wave of BDS actions. “Nordic countries boycott products manufactured in this facility. We shifted the production to our plant in China.”

But U.S. Secretary of State John Kerry has warned the Israeli government that if the peace talks collapse, Israel risks facing increasing threats of boycott and de-legitimisation campaigns.

BDS advocates an end to Israel’s occupation of Palestinian territories, including the dismantling of Israel’s security barrier and settlements. The movement also calls for “the U.N.-sanctioned and inherent right of Palestinian refugees to return to their homes of origin.”

For most Israelis, the right of return of millions of Palestinian refugees from the 1948 War and their descendants to what is now Israel would be tantamount to upending Israel as a Jewish state. Recognition of Israel as such by the Palestinian Authority is a major demand of Israeli Prime Minister Benjamin Netanyahu.

Inversely, such characterisation is adamantly rejected by the Palestinians as it would be equivalent to ignoring not only the right of return, a major Palestinian demand and a core issue of the conflict, but also the existence of the Palestinian-Israeli minority which constitutes roughly 20 percent of Israel’s population.

“The most effective and immediate strategy to blunt BDS and other forms of political warfare is to end the massive funding given to radical NGOs that promote these anti-Israel campaigns,” NGO Monitor, an Israeli right-wing non-government organisation close to the Israeli government states on its website.