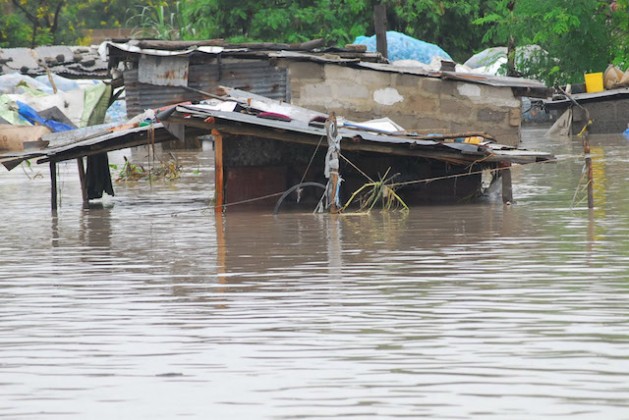 The Jangwani slum in Dar es Salaam, Tanzania, was flooded during the heavy rain at the end of 2013 and early this year. Credit: Muhidin Issa Michuzi/IPS

Early this month, the Tanzania Meteorological Agency (TMA) announced that Dar es Salaam was among the areas in northern and southern Tanzania that would receive above-average rainfall and strong winds in the coming weeks, and urged residents to take precautions.

Tanzania’s eastern Morogoro Region was also affected in January as flash floods displaced over 10,000 people and damaged infrastructure such as roads and houses.

In Jangwani and  Kigogo, administrative areas in Dar es Salaam, residents who refused to heed the government’s call to vacate the area are being affected by the current downpour.

Local residents from Kigogo told IPS that the water had become a serious health hazard because people are emptying their pit latrines into the flooded water, which resulted in human excreta spreading through the area.

“We drink water from the well but when it rains it is difficult to know if it is safe,” Riziki Mwenda, a resident of Kigogo, told IPS.

Public health experts have cautioned that residents in disaster-prone areas are potentially vulnerable to epidemic diseases.

Dar es Salaam regional commissioner Said Meck Sadick told IPS that waterborne diseases were endemic to the city because some residents did not observe good hygiene.

“We keep on reminding people in low-lying areas to take precautions and observe health regulations such as boiling water and using toilet facilities,” he said.

According to data from the Ministry of Health and Social Welfare, Dar es Salaam is among five coastal regions with the highest number of cholera cases with incidents reported almost every year.

But these cases could increase as this East African nation experiences the visible impact of climate change.

A 2011 study by the International Journal of Environmental Research and Public Health stated that risks to cholera increase by 15 to 29 percent with a one degree Celsius temperature increase.

Projections by the TMA show that mean annual temperatures here will increase between 2.1 to four degrees Celsius in northern, central and southern Tanzania by 2100.

The agency’s director of Research and Applied Meteorology, Ladislaus Chang’a, told IPS that increased frequency and severity of extreme weather events were likely to continue hitting most parts of the country.

“A rapid increase or decrease of rainfall will hit most parts of the country, causing floods or droughts, which has contributed to malnutrition due to lack of food, increased infectious diseases and scarcity of clean water,” he said.

However, Herbert Kashililah, a technical advisor with global charity Water Aid, told IPS that the increasing number of epidemic diseases related to climate change in Dar es Salaam was largely exacerbated by existing policy gaps and lack of citizen accountability.

“The existing gap between policy and practice is attributed to lack of accountability from principal actors and overlap of authority between local governments and central ministry in enforcing existing laws controlling such diseases,” he said. Tanzania has no policy on climate change.

Kashililah said that public health enforcement should be taken seriously.

“The government should significantly invest in a clean water supply for every city resident but [should] also ensure waste water is properly managed,” he said.

Kashililah said that a majority of households obtain water from boreholes that are contaminated with sewage and sanitation effluents and still did not have access to running water.

The government admitted that communicable diseases still posed a serious public health risk across the country as a whole despite efforts to prevent and control it.

The Minister for Health and Social Welfare Dr. Seif Rashid told IPS that the government was committed to improving the health and well-being of Tanzanians by encouraging the health system to be more responsive to those at risk of contracting waterborne diseases.

“The policy is there and how we implement it very much depends on the funds allocated in the national budget,” he said.

Rashid said that the government would continue its public education campaign through community-based programmes so that people understand and take appropriate measures to prevent themselves from contracting diseases.

He added that the government hoped to improve water supply and sanitation services across the country through its donor-funded Water Sector Development Programme.