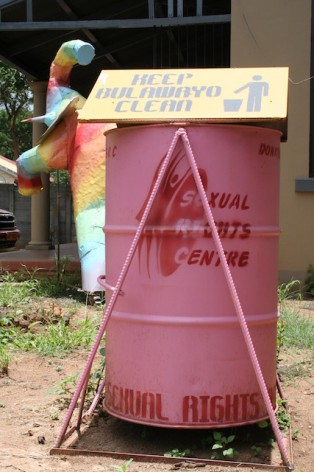 BULAWAYO, Feb 11 2014 (IPS) - Matthew Jacobs* has been married for two years but his wife doesn’t know that he is also in a relationship with someone else. If his secret were discovered, it could result in him ending up in jail. His crime? Being in a same-sex relationship.

Zimbabwe criminalises same-sex relations. Even though the new constitution guarantees rights such as equality and non-discrimination, it is silent on specific rights for the lesbian, gay, bisexual, transgender and intersex (LGBTI) community. And it is risky, if not deadly, to be gay and lesbian in Zimbabwe – a country where such relations are beyond taboo.

"Sexual rights are a matter of life and death, the challenge is to access safe spaces where people can live their lives." -- Mojalifa Mokoele, SRC spokesperson

“What could I do? I had to get married because it was expected of me [even though] I had a relationship with another man. I have [to live] this double life to survive,” Jacobs tells IPS.

Jacobs is just one of many homosexuals who are forced to live a double life in this southern African nation as they try to avoid stigmatisation, discrimination and arrest. It is no secret that Zimbabwe’s president, Robert Mugabe, is a fervent critic of homosexuality and has made a number of homophobic statements over the years. In July 2013, he criticised South Africa’s Nobel Peace Prize winner Archbishop Desmond Tutu for supporting LGBTI rights and said: “Never, never, never will we support homosexuality in Zimbabwe.”

Civil society activist and chief executive officer of the Habakkuk Trust, Dumisani Nkomo, tells IPS while every citizen is entitled to dignity, privacy and the enjoyment of all rights, in a conservative country like Zimbabwe, homosexuality is still hard for many to accept.

“I do not believe gays or lesbians should be discriminated against or should be persecuted because, like everyone else, they are human beings,” Nkomo says.

“In our conservative country, when pushing such an agenda one is bound to be ostracised. What anyone does in their bedroom is not any of our business, but once you bring something private into the public domain it becomes a problem,” Nkomo says.

It is a concern that motivated the establishment of the Sexual Rights Centre (SRC), a Bulawayo-based human rights organisation working with the LGBTI community, men who have sex with men (MSM) women who have sex with women (WSW), sex workers and the broader community to promote sexual rights.

SRC programmes officer Nombulelo Madonko tells IPS that the centre has documented cases of harassment of commercial sex workers, lesbians and gays by the police.

“When people talk about sex workers and gays, they forget that these are people, mothers, wives, sisters, brothers, fathers and men. Because of their orientation they have become faceless [and] they now have no rights,” says Madonko.

The SRC believes sexual rights, sex and sexuality should be part of the public discourse and not taboo because there is nothing shameful about consensual sex and sexual acts amongst adults.

According to the centre’s spokesperson, Mojalifa Mokoele, there is wide ignorance about sexual rights in Zimbabwe.

“The constitution in Zimbabwe is silent on sexual relations but criminalises gay/lesbian marriage. Not all gays and lesbians want to get married, but we do want our relationships to be acknowledged and recognised. All they want is to live their lives to the full, but that is too much to ask for in a society that is quick to judge and slow to accept,” Mokoele tells IPS in an interview at his offices.

“Sexual rights are a matter of life and death, the challenge is to access safe spaces where people can live their lives, but politicians have used the issue of gays … what they have said has become law and has become right,” says Mokoele.

Being lesbian or gay has an added burden when it comes to accessing other rights such as legal representation, education and medical care.

“How do I explain to a nurse about the painful tear in my backside without being asked how I got it in the first place?” Gideon Jones* tells IPS. He says that despite these challenges his family is aware of his status and comfortable with it. They are supportive and are encouraging him to pursue his ambition of being a poet.

Sian Maseko, SRC director, tells IPS: “Sexual rights are human rights and no one should be persecuted for who they love.”

Members of the the Zimbabwe Lawyers for Human Rights (ZLHR) have represented the Gays and Lesbians of Zimbabwe (GALZ), a local LGBTI rights organisation, in legal cases.

GALZ chairperson Martha Tholanah was arrested in 2012 and faced charges of running an “unregistered” organisation after the police raided the group’s offices and confiscated electronic equipment and various documents. In January, the Zimbabwe High Court ordered that the seized equipment be returned and that GALZ was not a private voluntary organisation and therefore not obliged to register in terms of the Private Voluntary Organisations Act.

“It is worrying that some authorities in Zimbabwe are [being increasingly] homophobic towards GALZ and people who are identified or perceived as being lesbian, gay, bisexual, transgender and intersex (LGBTI),” ZLHR spokesman, Kumbirayi Mafunda, tells IPS.

“Any harassment and persecution based on sexual orientation is a monumental tragedy and also a violation of international human rights law,” he says.