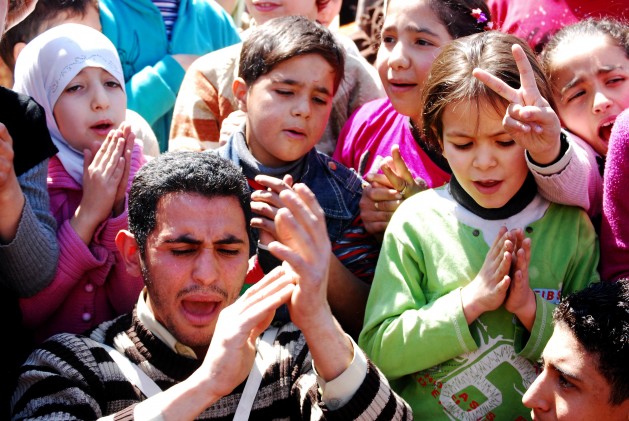 The celebrations over food aid at Yarmouk camp in Damascus were short-lived. Credit: Niraz Saeed/IPS.

DAMASCUS, Mar 29 2014 (IPS) - For just that moment, the refugees in Yarmouk camp in Damascus made news. After months of facing starvation and death in the shadows of the Syrian civil war came packets of food and aid in January – with cameras in tow.

The refugees poured out on the streets in a river of desperation to claim the first deliveries of aid that made it into the besieged area. Grown men were reduced to tears as their terror and isolation were momentarily broken.

The escape from siege and warfare in January was as brief as it was desperate.

But the camera crews have since moved on, and hunger, violence and disease have returned to torment the people stuck in the camp.

Yarmouk camp in Damascus used to be the largest community of Palestinians living in Syria. They had to leave their homeland in the wars of 1948 and then 1967. It was a flourishing and vibrant neighbourhood in the capital, home to more than 100,000 people.

By late 2012 the camp became embroiled in the increasingly malignant civilian conflict, and it has suffered for it. Rebels have been engaged in long and bloody battles with the forces of President Bashar Assad.

Yarmouk has faced siege tactics, indiscriminate bombardment, and sniper fire, as have other neighbourhoods. The tactic seems to have been to subdue whole populations. It seems to have succeeded.

Rebels in many of the besieged areas, including Yarmouk, entered into fragile truce with government forces and their allied militias earlier in the year. A string of local agreements were brokered to put the fighting on hold, and to allow food and medicine in and civilians out.

The escape from siege and warfare in January was as brief as it was desperate. “UNRWA [the United Nations Relief and Works Agency] remains deeply concerned about the desperate humanitarian situation in Yarmouk and the fact that repeated resort to armed force has disrupted its efforts to alleviate the desperate plight of civilians,” UNRWA spokesman Chris Gunness said in a statement.

Until recently resourceful volunteers had been working to maintain some rudimentary education system for the children and adolescents trapped in the camp. Working without institutional support, they were doing what they could to ensure the conflict would not leave a lost generation in its wake.

Now, the teachers and volunteers have had to close the classrooms. It’s not just bombs and snipers that have put a stop to their work but disease. The collapse of the healthcare system, chronic shortages of food and clean water, and accumulation of waste are combining to give rise to a number of health epidemics.

“One of our students fell unconscious in class, we took him to hospital and they diagnosed him with hepatitis,” Dr Khalil Khalil, a founding teacher of the makeshift school project, told IPS. “We then had all of our students tested and found at least seven other cases. The spread of this and other contagious diseases means a decision has been made to stop convening the classes.”

Making all this worse, fighting has erupted again. “The recent truce failed and the amount of vaccines and medication that made it into the camp were nowhere near sufficient to treat the plethora of diseases and illnesses we see spreading through the camp, especially among children,” Wissam Al-Ghoul, community health worker at the local Palestine Hospital, told IPS.

Fighters from both sides used the insufficient quantities of aid that did make it into the camp to reward their own.

“Members of the security services at the checkpoints seized some of the aid to distribute among their people, and rebel fighters stole some of the aid for their families and people close to them,” said food aid organiser Abou Salmi. “There is no order, and we suffer for that.”

About 7,000 parcels of aid are believed to have made it through the blockade in January. UNRWA concedes this was a “drop in the ocean” for the approximately 20,000 people who remain trapped in the camp.

In the spell when the siege was lifted, government forces and the Palestinian factions allied to them kidnapped many they suspected of supporting the rebels. Those picked up included children.

At least 30 men and adolescents have been detained, and their whereabouts remain unknown.

“Members of the Syrian security services, along with their allies from the PFLP-GC [a Palestinian faction allied to the Syrian government] detained at least 10 young men in front of my own eyes…We also know of people being lured to outlying buildings, and they were then kidnapped and whisked away,” said an UNRWA staff member who was among the team that oversaw the food aid. She asked not to be named for security reasons.

Each side blames the other for the breakdown in the ceasefire. “The regime did not release any of the detainees it had promised to, or secure the safe passage of food,” said Abu Khitaab from the ideologically extreme rebel battalion Jubhet al-Nusra.

“We pulled out of the camp fully as agreed but instead of releasing prisoners the regime began kidnapping young students and activists and to occupy some buildings inside the camp. We could not tolerate this, so we moved back in and resumed the battle.”

Regardless of who carries the responsibility for breaking the deal on which the ceasefire was built, for the innocent within Yarmouk the reality has returned to the same difficulties – a steady descent back into virtual imprisonment, and the chaos of fighting. Now, with disease added on.