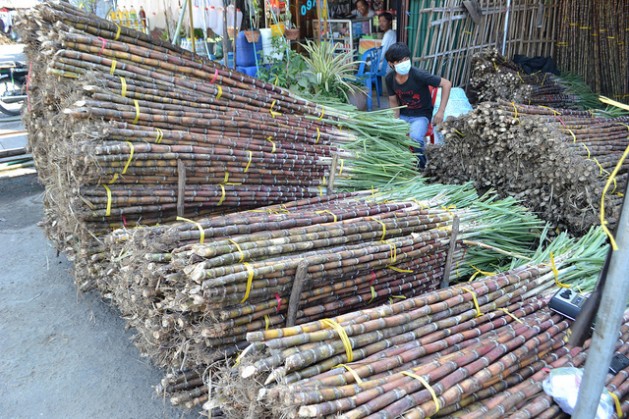 Sugar cane being sold at a market on the edge of Phnom Penh. The global soft drinks market alone is thought to use some 176 million tonnes of sugar each year. Credit: Michelle Tolson/IPS

WASHINGTON, Mar 18 2014 (IPS) - PepsiCo, the world’s second largest food and beverage manufacturer, has agreed to overhaul its longstanding policies around land rights, instituting a series of new safeguards and transparency pledges throughout its global supply chains.

Anti-poverty and development advocates are lauding the announcement, made Tuesday at the company’s New York headquarters.

"These companies are very competitive, and it turns out that a simple index, aimed at encouraging a ‘race to the top’, is an effective tool." -- Chris Jochnick

Coming on the heels of a similar pledge made late last year by Coca-Cola, the move appears to strengthen a new trend in corporate recognition of land rights, while also offering clear recognition of the growing power of consumer demand.

PepsiCo’s new pledge includes a “zero tolerance” policy for agriculture-related “land-grabbing”, or large-scale land acquisitions, among all of its commodity suppliers, only the second such company to do so.

In addition to its namesake sugared soft drink, PepsiCo owns a vast empire of well-known consumer brands, including Gatorade, Tropicana, Quaker and Frito-Lay.

“Regardless of the source of the commodity – whether from suppliers, directly or indirectly, a farm or processor – this land policy defines our intentions and the actions we as a company will take to recognise land rights throughout our supply chain.”

With annual sales of some 65 billion dollars, PepsiCo is the world’s second-largest producer of soft drinks, producing global brands including Mountain Dew, Miranda and others. The global soft drinks market alone is thought to use some 176 million tonnes of sugar each year, while PepsiCo’s commodity usage spans hundreds of ingredients.

In its new land policy, PepsiCo notes that it sources its raw materials from a “wide range” of land tenure set-ups, both formal and informal. As an initial step, the company says it will “comprehensively map”, and then implement a “presumption of transparency” throughout, its supply chains.

It has also pledged to implement free, prior and informed consent (FPIC) principles when either the company or its suppliers are acquiring land, with the aim of ensuring a substantive conversation and negotiating process with local communities.

Further, when the company or its suppliers are operating in a country that does not have “adequate land rights protections”, PepsiCo says it will lobby the national government of that country to put in place and implement specific FPIC principles. 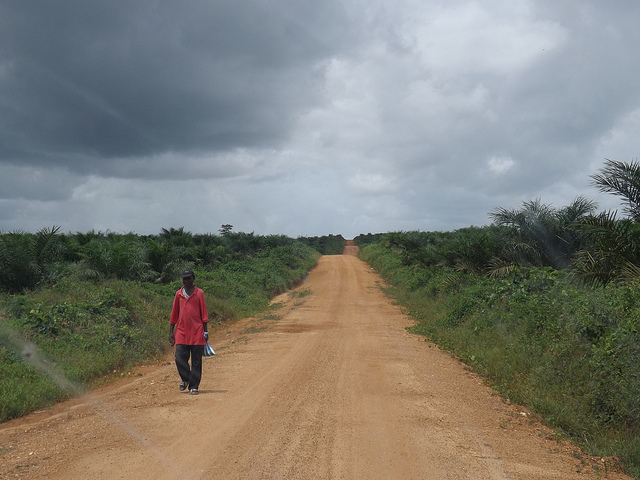 This land in Liberia has been leased by the government to Equatorial Palm Oil for 50 years. PepsiCo’s new pledge includes a “zero tolerance” policy for agriculture-related “land-grabbing”, or large-scale land acquisitions, among all of its commodity suppliers. Credit: Wade C.L. Williams/IPS

This unusual step is part of a broader commitment to be public and vocal about its new land policies, an agreement reportedly won through discussions with the anti-poverty group Oxfam International.

“This commitment to be a public advocate – towards others in the industry, towards governments and suppliers – is new terrain, both for campaigners and certainly for the companies themselves,” Chris Jochnick, the director of the private sector department at Oxfam America, told IPS.

“It’s very helpful to have major companies advocating on these issues at both the global and national level, among their industry peers and vis-à-vis the direct suppliers. For local communities and NGOs, it’s also useful to be able to point to these major companies and say that they’re insisting on FPIC standards.”

Race to the top

Both the recent Coca-Cola and now the PepsiCo pledges came about in part due to negotiations with and public pressure organised over the past year by Oxfam, and Jochnick says the new commitments are significant. He particularly points to the zero tolerance for land grabbing as “very ambitious”.

A year ago, Oxfam began a new initiative aimed at highlighting the land policies adopted by 10 of the world’s largest consumer brands, including PepsiCo and Coca-Cola. In November, Oxfam and others filed a shareholder resolution calling on PepsiCo to file an annual report “focused on the issue of land rights along the company’s supply chains”.

“PepsiCo’s sources of sugar include suppliers that have been linked to land grabs, which poses risk to the company and shareholder value,” the resolution stated. “PepsiCo must urgently recognize this problem and take steps to ensure that land rights violations are not part of its supply chain.”

In November, Coca-Cola announced that it would institute a “zero tolerance” policy for land-grabbing. Since then, almost 275,000 people have signed petitions calling on PepsiCo to follow suit.

“We’ve been surprised ourselves with how much pressure consumers have been able to exert, and how sensitive the brands are to that kind of engagement,” Jochnick says.

“These companies are very competitive, and it turns out that a simple index, aimed at encouraging a ‘race to the top’, is an effective tool. These companies would choose to be a leader rather than be perceived as a laggard.”

A year ago, just two of the companies on Oxfam’s list of 10 had even begun talking about land rights. According to an updated scorecard released last month, seven companies are now making specific commitments on the issue (the scores don’t include the new pledges by PepsiCo).

“We feel there’s real momentum around land rights right now,” Jochnick says. “So the next step will be to use that action to push the suppliers – Cargill, Bunge – to focus more broadly on land.”

As part of its new commitments on Tuesday, PepsiCo noted its ongoing participation in at least two multi-stakeholder groupings, aimed at creating voluntary social and environmental standards around the production of palm oil and sugarcane. Global demand for these products is currently surging, constituting the majority of the recent increase in land-grabbing.

Yet activists have increasingly panned these industry-led certification initiatives, including the Roundtable on Sustainable Palm Oil (RSPO) and Bonsucro, which focuses on the global sugar supply. Nonetheless, for the moment PepsiCo says it will continue its participation in both groupings.

“PepsiCo’s new land policy is a positive step. But instead of taking responsibility for eliminating land grabbing from its palm oil supply chain, PepsiCo is relying solely on the inadequate standards of the RSPO,” Gemma Tillack, a senior forest campaigner at the Rainforest Action Network (RAN), a watchdog group, told IPS.

“The RSPO continues to certify companies that destroy rainforests and cause massive climate pollution and human rights violations. To fully address these serious problems, PepsiCo must join other leading consumer companies and adopt a truly responsible palm oil sourcing policy.”

Last week, RAN and other advocacy groups formally opened to applications a new standards initiative, the Palm Oil Innovation Group (POIG), which aims to “build on” the RSPO process. In a joint statement released last week, POIG’s membership said it will “prove that palm oil production does not need to be linked to forest destruction, social conflict or worsen climate change.”