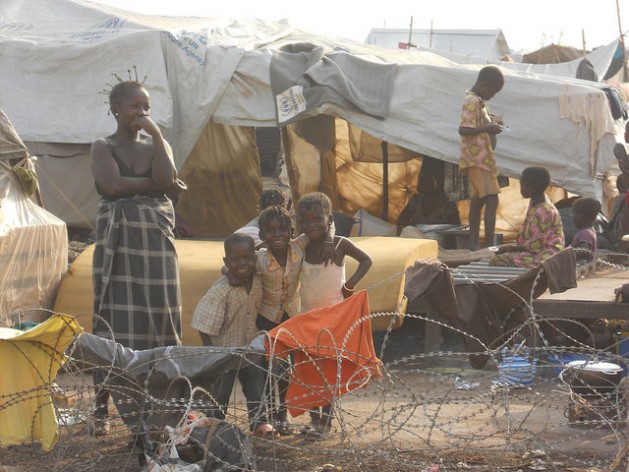 Over 601,000 people have been uprooted from their homes throughout the country, with over 177,000 of them in Bangui alone. Credit: EU/ECHO Jean-Pierre Mustin/cc by 2.0

UNITED NATIONS, Apr 4 2014 (IPS) - In a country suffering from what the U.N. has called “ethno-religious cleansing”, a “disappeared” state structure and “unacceptable sectarian brutality,” gaining access to the population of the Central African Republic has proven a difficult and sometimes deadly task for humanitarian workers.

“For everyone in this country, security is a challenge, because [the situation has] been very volatile and violent…Last year there were nine humanitarian workers who lost their lives,” Judith Léveillée, deputy representative for the U.N. children’s agency UNICEF in the CAR, told IPS from Bangui.

“We don’t carry weapons and we never use armed escorts.” -- Benoit Matsha-Carpentier of IFRC

“I’ve never seen anything like it, and this is my seventh mission,” she said.

The conflict in the CAR began in 2012 when Muslim Séléka rebels launched attacks against the government. During the following two years, the conflict has grown along sectarian lines, with Christian anti-balaka (anti-machete) militias taking up arms against Séléka groups. While Muslim civilians represent a majority of the targeted population, Christians have also been threatened.

“There are situations where we physically cannot access the people we need to reach because the forces that are fighting are making it hard for us to get to them,” Steve Taravella, spokesperson for the U.N. World Food Programme (WFP), told IPS.

“Roads are blocked, convoys are redirected, food supplies are looted and people are being otherwise attacked,” he said.

In recent months, due to both the increase of international forces and the mass flight of the Muslim population, the U.N. has reported a calming of hostilities in the capital.

Nevertheless, the extreme and often random violence in the CAR poses a complex network of security challenges for aid workers trying to reach the approximately 2.2 million people in need to humanitarian assistance.

“At one point, the only road that goes from Cameroon to Bangui, the one we use as a corridor for food, was completely closed because the drivers from Cameroon, who were mainly Muslim, didn’t want to cross the border. [For weeks] they were too scared,” Fabienne Pompey, the regional communications officer for the WFP based in the CAR, told IPS.

“Now the road is open to transport the food from the border, but we use a military escort from [the African Union peacekeeping mission] MISCA.”

“Insecurity and banditry is on the rise, and this is of course a very big problem for humanitarian organisations…Its difficult to drive on the roads, and its complicated to have vehicles in your own compound because there is a risk that they will be stolen,” Marie-Servane Desjonqueres, spokesperson for the International Committee of the Red Cross in central and south Africa, told IPS. 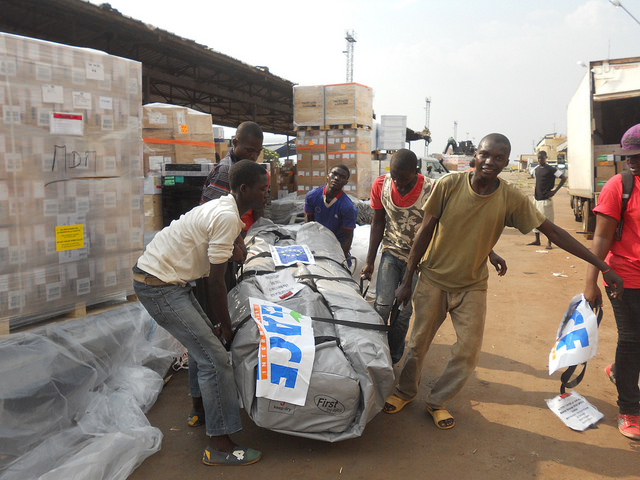 The EU has been airlifting life-saving humanitarian cargo to the Central African Republic. Credit: EU/ECHO Jean-Pierre Mustin/cc by 2.0

The creation of a secure environment for the delivery of humanitarian aid in the CAR and an increase of international troops were both key elements of U.N. Secretary-General (UNSG) Ban Ki-moon’s six-point recommendation of Feb. 20.

Nevertheless, security remains an issue and aid workers continue to be targeted and attacked by armed groups, the U.N. reported Thursday.

Currently, the only international military forces in the CAR are roughly 2,000 French troops, under the Sangaris mission, and approximately 6,000 African Union peacekeepers, under the MISCA mission.

Following the UNSG’s request, the European Union pledged nearly 1,000 to lend further support, but this force has yet to materialise.

For UNICEF and the WFP, the use of armed escorts allows for access into areas of the country with serious security concerns.

“We do regularly act with [escorts from] the Sangaris or MISCA operations…but that is in the case of a last resort,” explained Léveillée. “It’s very important that we keep our neutrality. We don’t necessarily want to be associated with armed escorts.”

On Mar. 3, the UNSG proposed a 12,000-person U.N. peacekeeping mission in the CAR. The U.N. Security Council (UNSC), which must approve all peacekeeping missions before their implementation, is expected to vote on the resolution during the second week of April, with a perspective implementation in September, current UNSC president and Nigerian ambassador, Joy Ogwu, told reporters Wednesday.

While some organisations, like Doctors Without Borders (MSF) and the International Federation of Red Cross and Red Crescent (IFRC) do not use armed escorts, negotiating with the parties to the conflict is a universally used tactic to gain access to people who would be otherwise inaccessible.

“We do not have armed personnel for security, we rely on the respect of the parties to the conflict,” Sylvain Groulx, head of the MSF mission based in Bangui, told IPS. “A lot of our operation includes outreach and dialogue.”

“We don’t carry weapons and we never use armed escorts,” Benoit Matsha-Carpentier, spokesperson for the IFRC, told IPS. “This is actually one of our principles.”

“There are ongoing discussions, whether at high level with the government or at the volunteer level…with whoever is in front of them, to make sure [aid workers] have safe access to those who are in need.”

Beyond the larger international organisation, the IFRC has a network of national, country-specific societies, which help facilitate support on a more local level. This IFRC national society in the CAR has had a major impact in helping both the IFRC and other humanitarian organisations that may be experiencing restrictions get aid to the Central African population.

“If it’s too dangerous to have us on the ground, then we [distribute] using a local partner,” Desjonqueres explained. “Our main partner in CAR is the Central African Republic Red Cross. They have a very strong network all over the country, a lot of volunteers all over the place.”

Broadening respect for humanitarian access is an important factor in the ability for aid workers to support the suffering population in the CAR.

“One of our mandates is to disseminate the respect for international humanitarian law,” Desjonqueres continued. “For many years, we have been conducting sessions…to talk about those basic rules of humanity that need to be respected during times of war, and that includes safe passage for humanitarian workers.

“We are distributing food to the people in need, our criteria is people in need,” stressed Pompey. “It is very important to repeat this every time so that the parties involved in the conflict let us go.”

For the crisis in the CAR, which has killed thousands and displaced more than 600,000 people, getting aid to those in need is an immediate objective, but it is not a long-term solution.

“The best option would be a political settlement [to the conflict],” Pompey told IPS, “something inside the country to help make peace.”