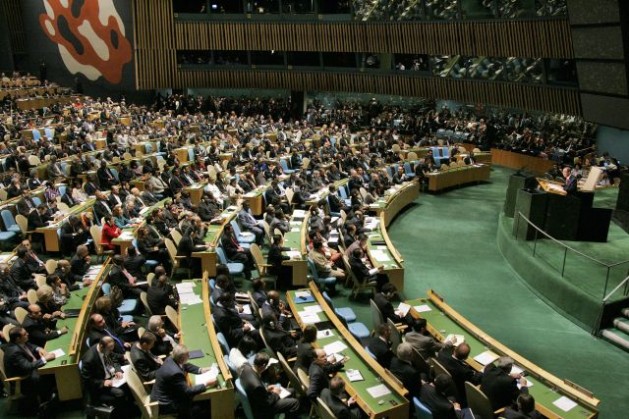 UNITED NATIONS, Apr 18 2014 (IPS) - After two long weeks of raging controversy over Washington’s refusal to grant a U.S. visa to the Iranian envoy to the United Nations, the U.N.’s office of legal affairs is being accused of moving at the pace of a paralytic snail – only to seek more time while remaining non-committal on the dispute.

But U.N. Spokesperson Stephane Dujarric challenged the timeline, pointing out that the United Nations would see events quite differently.

"The most basic logic of diplomacy is that it is not only your friends that you must talk with, you must also talk with those with whom you disagree." -- Dr. James E. Jennings

“The suggestion of allowing this matter to linger for two weeks is hardly accurate,” he told IPS Friday.

After a meeting Tuesday with Iran’s charge d’affaires Ambassador Gholamhossein Dehghani, U.N. Legal Counsel Miguel de Serpa Soares was holding back his ruling on the ground he was “still studying the issue and would very carefully consider precedents and past practice.”

“Still studying after two long weeks? That response was like a mountain labouring to produce a mouse,” said an Asian diplomat, conversant with the intricacies of U.N. politics and the nuances of English idiom and Aesop’s Fables.

But so far he has not.

Dujarric told IPS the U.N. legal counsel met with representatives of Iran on Tuesday immediately after they asked to see him.

He then followed up straightaway with a meeting with U.S. representatives on Wednesday.

As soon as the legal counsel was officially notified of developments, said Dujarric, he met with the representatives involved.

As events unfold, the United Nations stands accused of refusing to make a ruling – either supportive of the United States or Iran – by repeatedly dismissing the dispute as essentially a bilateral problem.

Dr. Jennings said it is a violation of the spirit of the U.N. Charter to use the pretense of national security or any other contrived smokescreen to prevent a country’s rightful representation in the world body.

As a sovereign nation, Iran has the right to name its own ambassadors, and does not need to ask permission of the U.S. or the U.N. to do so, said Dr. Jennings, who early this year, led a delegation of U.S. professors to Tehran for meetings with Iran’s foreign ministry and with the leader of Iran’s team of nuclear negotiators.

The U.S. decision last week to deny a visa to the Iranian envoy-in- waiting, Hamid Aboutalebi, has been challenged as a violation of the 1947 U.S.-U.N. Headquarters Agreement which was aimed at facilitating, not hindering, the work of the world body.

A former representative of a U.N.-based non-governmental organisation told IPS the United Nations in its dithering inaction is behaving like most governments behave when dealt a blow by the hegemon – “shut up and keep your head down”.

“We have to remember that when [former Secretary-General] Kofi Annan sent a private letter to former President George W Bush warning politely against a massive U.S. military attack on Fallujah, Iraq, in 2004, Washington countered with a fierce attack on Annan himself, forcing out most of his senior staff.

“Ban Ki-moon doubtless has this terrible precedent in mind as he reflects on his reaction to the latest U.S. breach of the Headquarters Agreement.”

Dujarric said a meeting of the U.N. Committee on Relations with the Host Country has also been quickly arranged and will take place next Tuesday.

“All this should convey that we take the Headquarters Agreement and its implementation very seriously,” Dujarric said.

“In the past days I have repeatedly said that this is a serious issue and that we hoped it would be settled bilaterally,” he added.

He also argued that comparisons to unrelated events in the past are neither helpful nor relevant.

Dr. Jennings told IPS the hubris of the U.S. Congress over approving a visa, combined with the timidity of President Barack Obama, has greatly escalated the danger of a flare-up over Iran’s nuclear programme.

“That short-sighted, knee-jerk posture has the potential to ignite a conflict that could dwarf the wars in Iraq and Afghanistan,” he warned.

The U.N. is, diplomatically speaking, “a corpus separatum [with special legal and political status] designed to be independent of the United States,” noted Dr Jennings.

“Of course, the U.S. has the right to refuse visas to anyone deemed a security threat, but Ambassador Hamid Aboutalebi is not such a person. He has a sterling record and a long career as a diplomat.

“The most basic logic of diplomacy is that it is not only your friends that you must talk with, you must also talk with those with whom you disagree in order resolve problems,” he added.

“If there ever was a need for peace through far-sighted diplomacy, this is such a time,” Dr Jennings declared.

The U.S. has accused Aboutalebi of being involved in the 1979 forcible takeover of the U.S. embassy and its diplomatic personnel in Teheran.

But the Iranian says he was only a translator and negotiator between the hostages and the hostage takers – and that he was not even in Tehran when the embassy was physically taken over by a group called the Muslim Students.