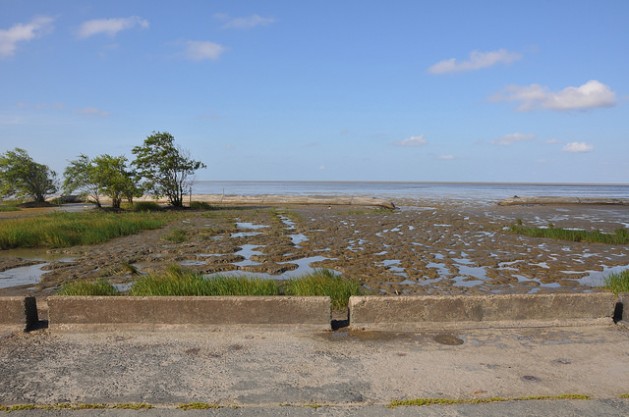 Geotextile tubes help natural regeneration of mangroves. The biodegradable tube filled with sand and water is used to form a barrier. Spartina grass is then planted in the area. Credit: Desmond Brown/IPS

GEORGETOWN, May 14 2014 (IPS) - Agriculture has always played an important role in the socioeconomic development of Guyana, one of just two Caribbean Community (CARICOM) member states that straddle South America.

Agriculture accounts for more than 20 percent of the country’s Gross Domestic Product (GDP). It is food-secure, and agricultural commodities represent more than 40 percent of its export portfolio.

"I’ve heard people say 'I’m poor and I’m not a scientist and I can’t do anything.' In fact we can do much as small countries, including in the reduction of emissions." -- Dr. Leslie Ramsammy

The 15-member regional bloc has always looked to Guyana, with an estimated 3.3 million hectares of agricultural land, as having a vital role in the Caribbean’s thrust towards food security.

But the chief executive officer of the National Agricultural Research and Extension Institute (NAREI), Dr. Oudho Homenauth, warns that climate change is robbing Guyana of some of its prime agricultural land.

“We are seeing increasing rainfall, higher tides and so forth,” he told IPS, noting that this has consequences for farmland, particularly along the coast.

“The seawater, as you know, is saline and once saline water gets on the land it is very difficult for that land to recover for crop production because there is nothing we can do in terms of adding any kind of amendment to correct soil salinity.”

Homenauth explained that “the land will have to be left for over a period of time until that salinity is lost” and as the authorities move to protect the agricultural land and also its population, most of whom live along the coasts, Homenauth told IPS that Guyana has come to recognise the importance of mangroves, especially for coastal areas.

He said the country has been on an intensive campaign to protect and restore its coastal mangroves.

Approximately 90 percent of Guyana’s population lives on a narrow coastline strip a half to one metre below sea level. That coastal belt is protected by seawall barriers that have existed since the Dutch occupation of the country.

In recent times, however, severe storms have toppled these defences, resulting in significant flooding, a danger scientists predict may become more frequent.

“Everybody knows Guyana’s seawall, the famous seawall, which is an expensive structure to maintain and to continue to build, particularly as sea level rises,” Agriculture Minister Dr. Leslie Ramsammy told IPS. 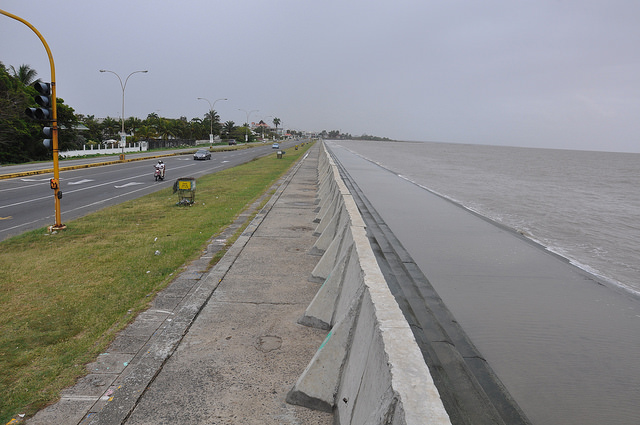 He said that maintaining the seawalls is an enormous cost for Guyana, which has been spending an average of three billion dollars a year to maintain and strengthen the defences.

“But in order to ensure that the seawall and sea dams continue to serve us well and to be less vulnerable to the onslaught of the ocean, we have been protecting and promoting the growth of mangroves and other structures such as geotextile tubes to reduce the impact of the waves coming in,” Ramsammy said.

“We’ve been doing bamboo growth along the seawalls to reduce the impact of the waves coming in. So a number of different structures are being tried but mangroves represent a major response of the Guyana government in supporting the seawall and therefore reducing the impact of water hitting against the wall, against the dams etc.”

Guyana has about 80,000 hectares of mangroves in place right now and over the last three or four years, the country has been “accelerating the growth of mangroves”, many of which were lost 20 to 30 years ago.

“We lost some of our mangroves and we are restoring those mangroves now. But we are also establishing mangrove growth in places that we’ve never been to,” Ramsammy said, noting that “with the water and movement onto the shore, it is very difficult to grow mangroves.”

As a result, Guyana has been conducting research to determine the best technology to use to achieve success.

“You need mangroves to grow to a certain extent before it can withstand the water and so we’ve been trying things like various grasses and so on to hold the soil together and we have been succeeding in these,” Ramsammy told IPS.

Technicians came up with the idea of constructing geotextile tubes to help natural regeneration. A biodegradable tube filled with sand and water is used to form a barrier so that at high tide, muddy water can enter the area and sediment left behind can help build the soil up to a necessary level.

Spartina grass is then planted in the area. The technicians have found that the mangrove seeds would get caught in the grass and would later germinate.

When it comes to climate change and global warming, Ramsammy believes Guyanese should take pride that they are perhaps the most aware country in the world.

“We have vast room for improvement in Guyana and the Caribbean but I think that Guyana would rank as one of those countries where people are very much aware. Are they doing what is necessary? I think they lag in terms of their knowledge and what they do, but if you don’t create the knowledge, actions will not follow.”

Ramsammy noted that no country is too small to do something about climate change. In fact, he said there are things that every citizen in the world can do.

“I’ve heard people say ‘I’m poor and I’m not a scientist and I can’t do anything.’ In fact we can do much as small countries, including in the reduction of emissions,” he said.

“We have in Antigua or even Guyana hotels etc. If these hotels were to switch [from] the use of fossil fuel to the use of bio-digesters, using the waste to create energy, we can make a big difference in emissions and maybe in the global environment. It is a needle in the sand but at least it creates an avenue for every citizen to play a role and I think we should adopt that kind of approach that all of us as citizens could do something,” Ramsammy added.