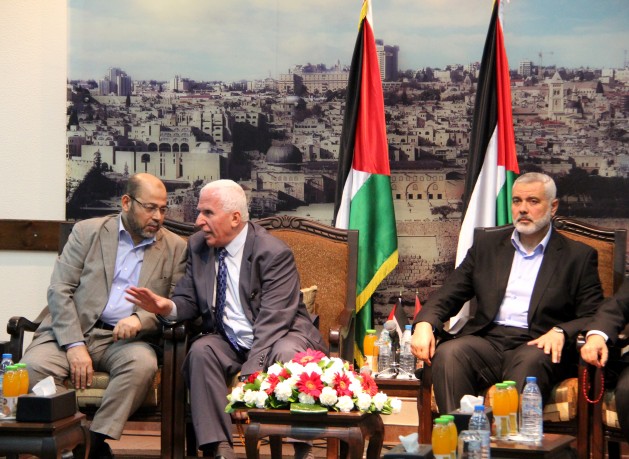 GAZA CITY , May 6 2014 (IPS) - The nascent move for reconciliation between the Fatah party in the West Bank and Hamas which rules the Gaza Strip could change the balance in the Middle East – if it were to proceed and deliver as promised.

The division between the two, across separated Palestinian regions, has meant a setback to development and rights, and weakened the Palestinians’ position for political bargaining.

The Israeli government seems still in shock over this unexpected agreement and the new political calculations it would bring.

The split came in June 2007 when Hamas took control of Gaza in anticipation of an anti-Hamas coup, and expelled the security forces of the Fatah-led Palestinian Authority.

Two weeks after the reconciliation was announced Apr. 24 this year, Ismail Haniya, Prime Minister of the Hamas government, and President Mahmoud Abbas who heads the Fatah government in the West Bank, are moving cautiously forward.

The reconciliation agreement calls on President Abbas to begin consultations to form a new government of national unity to be chaired by him within five weeks of the signing of the agreement. The agreement also sets out to hold a single election in both Palestinian areas within six months of the formation of a unity government.

The rapid and unexpected move was a reflection of the deep crisis the Hamas government has been facing under the siege imposed by Israel on Gaza seven years ago and the recent tightening of the Egyptian army grip on the Palestinian-Egyptian border. The Egyptian army destroyed tunnels that had become an economic life line for the Gaza Strip.

“Hamas is sincere in its intentions on the reconciliation process, and has been explicit in its acceptance of all the terms; we are ready to form a government of national unity in accordance with the understandings with Fatah and the Palestinian factions,” Hamas leader Dr. Salah Bardawil told IPS.

Azzam Al-Ahmad, the Fatah official in charge of reconciliation talks said it is time for the Palestinian spilt to end. He reiterated that his movement is sticking to agreements reached with Hamas in Cairo, and then in Doha under the auspices of the Emir of Qatar. “We must move forward towards the formation of a national unity government,” Ahmad told IPS.

Any unity government that is formed as planned will face major tasks. “The first is preparation for legislative and presidential elections, the second is tackling difficult issues such as the siege imposed on Gaza and finding ways to end the crisis at the Rafah crossing through understanding with our Egyptians colleagues,” Mustafa Barghouti, secretary general of the Palestinian National Initiative and a member of the reconciliation delegation told IPS.

Palestinian people, particuarly in Gaza, hope the agreement will lead to an easing of the siege and closure imposed on Gaza for years, and a reopening of the Rafah border crossing between Gaza and Egypt.

But Hamas may not immediately be able to build better relations with Egypt, due to its security problems with the current government there.

“Egypt welcomed the signing of the Palestinian reconciliation and it is possible to see measures to ease restrictions on Rafah crossing to facilitate Palestinian travel in general, but this does not mean a changing of Egypt’s policy toward Hamas,” Mekhemar Abu Se’da, political science professor at Al-Azhar University in Gaza told IPS.

“This means that Egypt will continue to pressure Hamas unless Hamas provides signals indicating it is distancing itself from the Muslim Brotherhood in Egypt.”

The Israeli government seems still in shock over this unexpected agreement and the new political calculations it would bring. There have been indications of imminent Israeli sanctions on the Palestinian Authority.

The actions of external powers including the U.S. and the European Union will be crucial in supporting or undermining of the unity process.