On the Street That’s Home 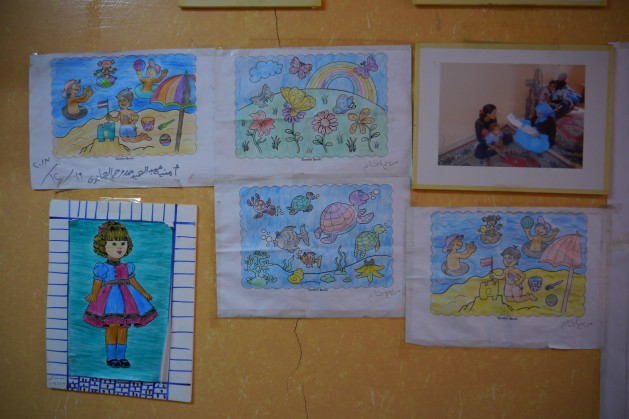 On the wall of a shelter home in Cairo. Credit: Rachel Williamson/IPS.

CAIRO, May 5 2014 (IPS) - Leila*, 19, has a soft, rasping voice and sad eyes. Her face is striped with long scars but nothing in her neat appearance hints that for the last nine years, her ‘home’ has been the streets just north of downtown Cairo.

Using her words sparingly, Leila tells IPS she was just a child when she was raped by her father. Called a liar by her mother and rejected by the rest of her family, she only escaped the beatings that followed by joining the growing ranks of young women who live on Cairo’s dangerous streets.

She wants a little empathy for a life she didn’t want and one she hopes her son will never experience.

Life on the street was not easy. Leila endured violence, sexual attacks, police harassment, and rejection by employers when they discovered she was homeless.

Last year it seemed she might be able to leave that life behind after meeting a young man from Sharkeya province in the Delta region. They wed using a form of Islamic marriage not recognised by the state and which is easily ended, but which allows a couple to live together.

Leila became pregnant and the man’s mother threw her out of the house. When she pleaded to her husband for help, he rejected her and the baby.

Leila’s story is all the more horrifying because it’s becoming increasingly common, although there’s no hard data to show many young women are in the same position.

Hend Samy runs a drop-in centre for homeless mothers in the poor suburb of el-Malek el-Saleh for NGO Banat al-Ghad, commonly known as ‘Banati’ or ‘My Girls’.

Photographs and children’s pictures have been hung on the walls, that are painted in bright colours. When IPS visited smears of breakfast were still being scraped from a big dining table. Happy, shrieking children commandeered the floors and stairwells.

Samy, like all sources IPS spoke to, had noticed an increase in the numbers of girls – and later, girls with children – living rough since 2011.

In 2009, a National Council for Childhood and Motherhood (NCCM) survey said Egypt had 5,299 street children generally. But in 1999 the General Egyptian Association for Child Protection, an NGO, put the figure at two million.

NGOs such as Banati, Plan Egypt and Hope Village provide much needed legal, medical and social support to street mothers. Government organisations such as the NCCM and the Ministry of Social Solidarity have several programmes to meet the needs of street children. But there is little targeted assistance outside Cairo.

Shirley Wang, a researcher at the American University of Cairo, says that poor communication between NGOs and government services leads to duplicated services. She also says that few are trying to change the public perception of street children as “criminal” and “dirty”.

That perception is especially dangerous for vulnerable young women living in a society that prizes female virginity.

In Leila’s words street children are viewed “like they are dogs not humans.”

Nelly Ali, an advocate for Egypt’s street kids, gives an example on her blog of a 14-year-old girl she names Basma from Upper Egypt whose grandfather kept her baby daughter locked in a chicken coop to hide the “shame” of Basma’s rape from the neighbours.

Amira el-Feky, now based in Berlin, used to work with 12-18 year old girls at Hope Village. She explains some of the dangers of the street to IPS.

“Many girls in the street experience sexual violence in one way or another. Some are in an abusive sexual relationship, others get raped or forced to work as sex workers,” she tells IPS.

Drugs are seen by many as a source of relief. El-Feky said one girl would take painkillers because they would make her head feel “light and funny”, while another would take stimulants to stay awake at night and therefore stay safer.

Homeless young mothers are the most vulnerable of street dwellers, and they also have the least legal protection.

“They don’t have any rights. This is why there are NGOs calling for their protection,” Banati executive director Rania Fahmy tells IPS.

Fahmy worked on the 2014 constitution. She said there were two articles that would be good for street mothers: Article 89 which criminalises human trafficking and is a step towards protecting vulnerable young women from being sold into temporary ‘marriages’; and Article 80 which makes the state responsible for protecting children from violence and exploitation.

Article 80 also enshrines in law, for the first time, the age of a child. Fahmy said the Muslim Brotherhood government fought this in the 2012 version of the constitution as they wanted to legalise the practice of child marriage. Now a child in Egypt is anyone under 18.

The constitution states that identification papers are a right. Leila’s voice shakes with worry when she speaks of her three-month old son. He’s healthy, but underweight for his age – and he doesn’t have a birth certificate.

Without a birth certificate a child can’t access state services such as education or health care. Banati and Hope Village have legal units to help mothers get proper documentation for their children.

But Javier Aguilar, chief child protection officer at the United Nations Children’s Fund (UNICEF) says the latter had only managed to register two or three cases in the last five years.

Egypt’s laws governing children are “pretty good” and include community-based protection initiatives, but they simply not being implemented, he tells IPS. “It needs a tremendous effort in mobilising government resources.”

Leila spent half her childhood living on the street, so she has firm ideas what the government should do. She wants the state to shelter homeless people, and provide jobs, healthcare and education.

But more than that, she wants a little empathy for a life she didn’t want and one she hopes her son will never experience.

“I want to tell everyone that they should feel for us.”

*Actual names of mothers and their children have been withheld.