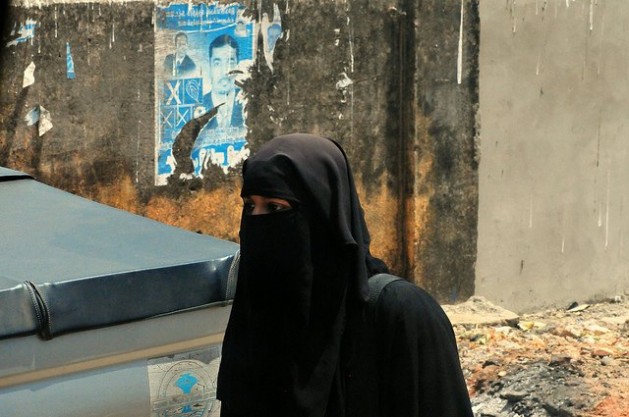 COLOMBO/ALUTHGAMA, Jun 19 2014 (IPS) - The signs had been clear for months; beneath the veneer of normalcy in Sri Lanka’s southwestern coastal town of Aluthgama, religious tensions were brewing, but no one was sure how or when they would erupt.

A little over a month ago the cauldron simmered over when a mob attacked a Muslim-owned shop in this town, 60 km south of the capital Colombo, after the owner’s brother was arrested for sexually molesting a minor from the majority Sinhala community.

Barely a month later, on Jun. 12, hostilities flared again when crowds of angry people surrounded the local police station following an altercation involving a Buddhist monk and some Muslim residents.

When officials in Colombo and Aluthgama heard that the hard-line group Bodu Bala Sena – loosely translated as Buddhist Force and referred to simply as the BBS – was planning a meeting on Jun. 15 in Aluthgama, they sounded the alarm.

“When you see your house burnt down, your life destroyed in flames, it is very difficult to regain the trust in those you expect to protect you." -- Iqbal Asgar, a Muslim resident of Dharga Town
Faiszer Musthapha, a deputy minister in the government of the ruling United People’s Freedom Alliance (UPFA), urged the inspector general of police to increase security in the area for fear the rally could turn sour.

The warning fell on deaf ears.

On Jun. 15, the meeting went ahead as planned and shortly thereafter, trouble began in the nearby Muslim enclave of Dharga Town. Some of the participants in the BBS rally traveled through the town in a convoy and the first clashes erupted near the town’s mosque where local residents had gathered.

By dusk the police had declared a curfew, but by then the rampaging mob could not be contained. Sporadic violence continued for the next three days in Aluthgama, with smaller incidents reported in the neighbouring town of Beruwela, leaving eight dead, according to residents, though police said only two fatalities had been reported. Locals also told IPS an additional 80 people were wounded in the brawls.

With homes and business premises going up in flames before their eyes, families were forced to take shelter in school buildings, where women huddled in overcrowded classrooms with their children while the men stood guard outside, fearful that the Buddhist mobs would return at any minute.

While the tragedy in Aluthgama is not the first example of post-war communal riots in the country, it has certainly been the worst, representing the first riot-related deaths since Sri Lanka declared an end to its ethnic conflict in 2009.

Previous incidents involving the BBS include the attack on a Muslim-owned clothing store on the outskirts of Colombo on May 13 last year and the storming of a press conference held by a group of Buddhist and Muslim leaders on Apr. 11 this year.

When the BBS rose to prominence in early 2013 its leaders said their aim was to help Buddhism regain its ‘rightful place’ in Sri Lanka.

Although officially constituted on May 7, 2012, the group did not release its 10-point declaration until February 2013, spelling out such demands as an end to Halal certification for certain food items, suspension of the scheme which allows Sinhalese women to work in the Middle East, and a full ban on birth control.

Speakers at BBS rallies have repeatedly claimed that so-called ‘Muslim extremism’ is the biggest threat facing Buddhists in a country where Muslims constitute 10 percent of the population of some 20 million.

Leaders of the movement claim they enjoy close ties with the government, but the state has denied official links with the group.

As Muslim residents nervously make their way back to the scene of the furore, rights groups and concerned citizens are raising questions about the government’s lax reaction to the violence and the tensions that precipitated it.

From the G77 summit in Bolivia, President Mahinda Rajapaksa tweeted the following message immediately after being notified about the attacks:

The Government will not allow anyone to take the law into their own hands. I urge all parties concerned to act in restraint. -MR (1/2)

Back in Colombo on Jun. 18 he visited the troubled areas and promised an impartial probe into the incident.

But civil society leaders, as well as top officials in the Rajapakse government, want more assertive action from the government to stem communal violence once and for all.

“For 72 hours, we begged the government to prevent this rally from taking place on Sunday for fear of riots […],” said the minister, who is also the head of Sri Lanka’s largest Muslim political party, the Muslim Congress, adding, “I am ashamed. I couldn’t protect my people.”

Under tremendous pressure, police arrested close to 50 people Monday night in connection with the violence, 30 of who have been remanded in police custody according to Police Spokesman and Superintendent Ajith Rohana.

Those who were caught in the violence told IPS that if the authorities had acted swiftly, the mayhem could have been avoided.

Eyewitnesses say that BBS members who entered Dharga Town encountered the police as they neared the mosque, but it didn’t slow them down.

“The police were either overwhelmed, or scared, but for whatever reason they did not take any action to prevent the clashes. If they had, lives would not have been lost,” Iqbal Asgar, a resident who fled the violence, asserted.

He said that most of the Muslim properties in the town had been torched, including at least one car dealership and one small factory. Residents told IPS that the losses could run into millions of rupees (thousands of dollars).

Even three days after the riots, tension was still palpable in the town, with plumes of smoke rising from the remnants of charred buildings. Anger among the victims, left helpless in the face of the carnage, hung thick in the air.

Muslim women were the first to venture back to the outskirts of Dharga to examine what was left of their properties. Those who lived closer to the town centre were too terrified to return – as were most of the men, who remained in the safety of the schools where the families initially sought shelter.

They have good reason to be afraid. Even after the army swept through the town in a bid to clear it of extremist elements, Asgar said the displaced heard rumors that the mobs were still at large, and had even attacked a vehicle carrying food aid for those affected.

In the absence of state sponsored relief immediately after the riots, religious and community groups, including Buddhist organisations, mobilised to gather and deliver dry rations, clothes and baby food to the affected population as early as Jun. 16.

Still, it will take sustained effort to repair the sacred bond of communal trust and harmony that now lies in ashes in the southwest of Sri Lanka.

“When you see your house burnt down, your life destroyed in flames, it is very difficult to regain the trust in those you expect to protect you,” Asgar told IPS.

According to Jehan Perera, who heads the advocacy body known as the National Peace Council, the government must publicly say that all minorities including Muslims are full citizens of the country, take legal action against the perpetrators of the riots and pay compensation for those who have lost loved ones and property.

“Failure to do so,” he told IPS, “would be an abdication of responsibility.”

President Rajapaksa has pledged to rebuild all damaged property with state support; it remains to be seen whether the promise will be honoured in the weeks and months to come.