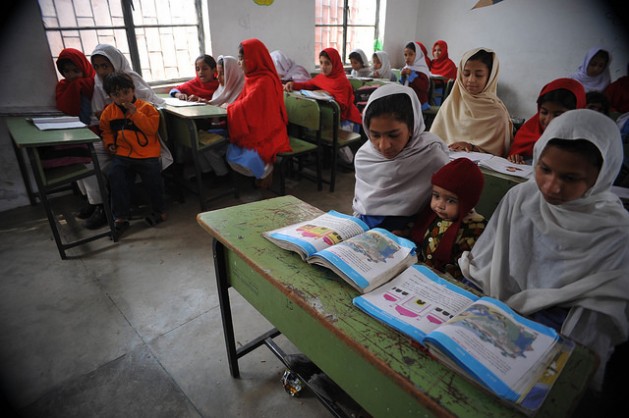 PESHAWAR, Pakistan, May 19 2014 (IPS) - Minority communities in Pakistan have long had a raw deal. Accounting for just 10 percent of this country’s population of 180 million, they are no strangers to marginalisation, discrimination or even violence.

But persistent reports that Christian and Hindu girls are being forcibly converted to Islam might just take the top spot in a long list of atrocities that non-Muslims are forced to endure.

“The situation is extremely grim. About 1,000 Hindu and Christian girls are abducted in Pakistan every year. They are converted to Islam through the use of forced marriages,” Dr. Ramesh Kumar Vankwani, chief patron of the Pakistan Hindu Council (PHC), told IPS.

Rights groups who have been following the issue for years say the number of reported cases fails to capture the true extent of the problem, since many families are unable or unwilling to lodge formal complaints, and the girls themselves are reluctant to speak out against the perpetrators.

"Islam itself forbids the idea of forcing someone to take a religion they do not truly believe in. It goes against the teachingS of Prophet Muhammad." -- Peshawar-based religious scholar Ghulam Rahim

In December last year, a six-year-old girl named Jumna, along with her 10-year-old sister Pooja, went missing from their home in Mirpur Khas, a city in Pakistan’s southeastern Sindh province. After hunting day and night, their parents discovered the girls were living with a man named Rajab Pathan.

Soma, the girls’ mother, told IPS that the case quickly blew up in the media, leading to a trial at which both girls admitted to having embraced Islam of their own free will.

This, according to a report released last month by the Movement for Solidarity and Peace in Pakistan, is typical of young girls who are kidnapped, forcibly kept away from their families and – in all likelihood – intimidated by their captors.

“Once in the custody of the abductor, the victim girl may be subjected to sexual violence, rape, forced prostitution, human trafficking and sale, or other domestic abuse,” the report found.

Focusing primarily on the Christian community, the study says roughly 700 of the girls abducted each year are Christians, while “conservative estimates” indicate that about 300 are Hindu. Most of the girls are thought to be between 12 and 25 years of age.

A dearth of press coverage and reluctance on the part of the police to disclose details of such cases mean the actual figures could be much higher, the report’s authors say.

Even when families do file official complaints in the form of First Information Reports (FIRs) for abduction or rape at the local police station, the kidnappers immediately file counter-claims on behalf of the victims, stating that the conversions were voluntary and accusing the families of “harassing” the happily married girls.

The cases are then closed, without any relief for the families involved.

PHC’s Vankwani told IPS he is unhappy with officials’ reaction so far to the problem. “The government fears reprisals from fundamentalist groups, so our complaints go unheeded,” he said.

The threat of armed groups is not to be taken lightly. A famous case in 2012 involving a girl named Rinkle Kumari illustrated the darkest side of the forced conversions.

Abducted from her home in the Sindh province in February, the girl was subsequently produced before a magistrate to whom she allegedly stated that she had married her captor, Naveed Shah, of her own free will.

That statement, according to PHC General Secretary Hotchand Karmani, was “made under duress” due to the presence of “dozens of armed men in the court premises,” he told IPS.

Comprising just 1.6 percent of Pakistan’s overwhelmingly Muslim population, Christian communities have traditionally settled in the southern port city of Karachi, as well as throughout villages in the Punjab, and in large industrial metropolises like Lahore and Faisalabad.

An estimated 200,000 Christians also dwell in the northern Khyber Pakhtunkhwa (KP) province, formerly known as the North Western Frontier Province, with 70,000 Christian residents in Peshawar, the capital city of the largely tribal region.

Hindus form a larger group, counting seven million members who make up 5.5 percent of the population. Many reside in urban areas throughout the province of Sindh, but at least 50 percent are concentrated in the southeast district of Tharparkar, which borders India.

A long history of invasion, conquest and settlement has shaped the demographics of present-day Pakistan. Hindus, for instance, once made up the majority of the Sindh province, but were forced to scatter in the wake of Persian, Arab and Ottoman invasions, the earliest dating back to 513 BC.

Waves of violence following the bloody partition of India and Pakistan in 1947 forced thousands of Hindus to flee to cities like Delhi and Mumbai. While the Christian community has not experienced comparable bouts violence, they too have suffered attacks and systematic discrimination.

Those who wish to preserve Pakistan’s diversity fear that the latest wave of religious intolerance spells trouble for a country already torn asunder by fundamentalists often operating in collusion with what Vankwani calls the “illiterate clergy”.

“Our problems are increasing with each passing day, with no apparent interest on the part of the government to solve them,” he added, pointing to the government’s failure to pass the 2008 Hindu Marriage Act, which would allow Pakistan’s largest religious minority to register its own marriages.

Government officials, meanwhile, deny that they have been sitting on their haunches. Federal Minister for Religious Affairs and Interfaith Harmony Sardar Muhammad Yousaf told IPS his office had issued instructions to all provincial governments to take legal steps to prevent forced conversions.

“The government has given us approval to take concrete steps for the protection of the rights of minorities,” he insisted. “We are set to present the Hindu Marriage Bill in the National Assembly soon.”

For religious experts, forced conversions fly in the face of Islam’s most basic tenets of peace, love and brotherhood. “People should be free to live in line with their chosen religions,” Peshawar-based religious scholar Ghulam Rahim told IPS.

“The government should protect them. Islam itself forbids the idea of forcing someone to take a religion they do not truly believe in. It goes against the teachings of Prophet Muhammad, peace be upon Him.”