Q&A: Sperisen Trial “A Further Step in the Fight Against Impunity Across the Board”

Erwin Sperisen, a Swiss and Guatemalan citizen, is being tried in Geneva for the murder of ten prisoners in 2005 and 2006, when he was chief of the National Civil Police of Guatemala. Testimonies against him were brought mainly by a coalition led by TRIAL (Track Impunity Always), an NGO that brings international crimes to justice in Switzerland and before international institutions.

GENEVA, Jun 1 2014 (IPS) - Erwin Sperisen was chief of Guatemala’s National Civil Police from 2004 to 2007, when he left the country for Switzerland. In August 2010, the Guatemalan authorities issued an international arrest warrant, accusing him, among others, of extrajudicial executions in the prisons of Pavon and Infiernito.

The authorities of the canton of Geneva arrested him on August 31, 2012, but he could not be extradited to Guatemala because he also holds a Swiss passport. He is now standing trial in Switzerland and risks life imprisonment. The verdict in the trial, which started on May 15, is expected to be handed down on June 6. 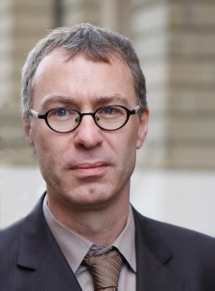 TRIAL (Track Impunity Always), an NGO that brings international crimes to justice in Switzerland and before international institutions, played a major role in bring Sperisen before the court. IPS talked to TRIAL director, Philip Grant.

IPS: What is at stake in this trial?

Philip Grant: The capacity of the Swiss judiciary to judge facts or crimes committed thousands of kilometres away, in a completely different context and culture. Switzerland has not held such a criminal trial since 2000, when a Rwandan mayor was sentenced to 14 years imprisonment for his participation in genocide and crime against humanity.

More broadly, there is a wider trend that is pushing states to handle cases where the crimes are committed abroad and the links to the country are very weak or possibly not existent, except that the suspect is caught on the territory.

The legal basis is universal jurisdiction. International law, particularly the Geneva conventions and the Convention against Torture, require the international community to investigate and judge those crimes.

IPS: Is this a new trend?

Philip Grant: No, but it is growing rapidly. There have been dozens of cases, starting with the Eichmann case in Israel in 1961, then Pinochet in 1998 and now there are more and more cases. In Great Britain the Home Office indicates that hundreds of suspects have entered the country from Sri Lanka, Afghanistan, the Balkans, Sierra Leone and elsewhere.

No other country compiles similar figures, but the Netherlands has mentioned that dozens of suspected Rwandan genocidaires are present on its soil, and in France alone, more than 25 criminal complaints have been filed by NGOs against Rwandan suspects.

Several countries have set up war crimes units. The Dutch war crime unit has 35 investigators who regularly arrest people. The French one was created two years ago and a first trial earlier his year has ended in the conviction of a Rwandan man to 25 years in prison.

IPS: Is this limited to Western countries?

Philip Grant: No. Cases are currently being investigated also in Senegal – against Hissène Habré, a Chadian citizen, and in South Africa, against Zimbabwean suspects. Argentina tried to open up cases linked to Franco’s crimes in Spain.

Many countries may not be ready to investigate, but most of them have a criminal code that gives them the capacity to investigate and judge international crimes.

Another trend is that Northern prosecuting authorities start judging also their own nationals and not only people from the global South.

IPS: Does that refer also to economic crimes?

Philip Grant: Timidly. In Switzerland, the Swiss General Attorney opened a criminal investigation into the Swiss company Argor, one the most important gold refiners in the world, for its alleged complicity in the pillage of gold in the Democratic Republic of Congo.

In France, prosecutors are investigating a company that sold surveillance material to Libya that allowed the former regime to track down and torture opponents.

The rationale is to judge not only the perpetrators of the crimes, but also those who profit from them.

The Netherlands investigated a Dutch company, Riwal, which contributed to erecting the separation wall between Israel and Palestine, a clear violation of international humanitarian law. The offices were raided by the Dutch police. The case was later halted, but the company had stopped its business around the wall.

When the decision was made public, another company working in the Occupied Territories put an end to its collaboration with Israel, fearing that it might be breaking international law.

So it is beginning to have real effects.

IPS: Could Erwin Sperisen have been tried in Switzerland even if he had not been a Swiss national?

Philip Grant: If you don’t have any close link to a country like nationality, the threshold to risk prosecution is the level of crimes you commit. For stealing a car, there is no universal jurisdiction.

You can become a target of universal jurisdiction if you commit human rights violations that amount to international crimes – like genocide, war crimes and crimes against humanity.

The system was not used very much in the past, but now more and more NGOs are working on this issue. In Switzerland, TRIAL is the only one that goes to the field to investigate such cases and comes back to file complaints.

IPS: What are the main difficulties in this kind of procedure?

Though it involves ten cases of extrajudicial killings and ten families could potentially have filed a complaint, some were afraid, others are living abroad. The Swiss judiciary faces difficulties in ordering protection measures that would apply in Guatemala.

IPS: How do you work with organisations in Guatemala?

Philip Grant: By working with local NGOs and human rights defenders, or with the Procuradoria de los Derechos Humanos, we were able to gather evidence against Erwin Sperisen.

The United Nations established the International Commission against Impunity in Guatemala to investigate crimes committed by illegal security forces because the national investigators themselves were considered too corrupt and unreliable. We also talked to them, even though they could not share the results of their investigations with us.

Although we have filed the initial complaint with other fellow NGOs, we are not party to the case. What we did for instance was to feed information to the authorities and to put them in contact with witnesses. During the trial, only the plaintiff is represented in court. If Erwin Sperisen is sentenced, she can ask for reparation.

TRIAL has filed many other cases, of which a few are still under investigation. Others are closed: when George Bush announced that he was coming to Geneva in 2011, we started working on a complaint for torture. At some point it was made public and suddenly he decided not to come.

Currently we are investigating a small number of cases of citizens of Western countries as well.

IPS: The verdict will come on June 6. What will be the consequences of this affair?

Philip Grant: Sperisen’s direct superior, the former Interior Minister Carlos Vielmann, is in Spain under investigation. If Sperisen is convicted, it will trigger strong calls to have Vielmann also judged there.

I can imagine that effects will also be felt in Guatemala. I assume that the current chief of police of Guatemala must be following the trial. If Sperisen is sentenced, I bet there will be changes in the way the Guatemalan police operates.

But whatever the verdict, it will be a further step in the fight against impunity across the board.