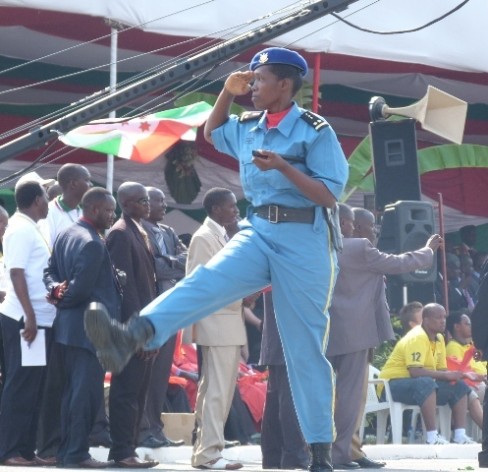 The Burundi National Police is composed of 2.9 percent women. Despite a 30 percent quota for women’s representation in parliament, there is still a long way to go to fill the gap in government institutions where women represent only an average of 20.15 percent. Courtesy: Bernard Bankukira

BUJUMBURA, Jul 5 2014 (IPS) - As Burundi heads towards the 2015 general elections, and despite a quota of 30 percent women’s representation in parliament, women in this southeast African nation feel that they are yet to have a significant say in the management of their country.

Bernardine Sindakira, the chairwoman of Synergy of Partners for the Promotion of Women’s Rights (SPPDF), a Burundian coalition of women’s rights organisations, tells IPS that the country’s very traditional culture still considers women as “homemakers” as women are educated to play this role from young. “A hen doesn’t crow when the rooster is there,” says a Burundian proverb.

"We’ve got so many woman engineers at building sites, doctors, heads of organisations, business women, security women, and so many others." -- Marceline Bararufise, Burundian Member of Parliament

“This has long kept her in the position of being unable to [ensure] her empowerment and have the place she deserves in the country’s management,” says Sindakira.

This country is still recovering from a 12-year ethnic-based civil war after the 1993 assassination of the country’s first democratically-elected president, Melchior Ndadaye. Almost 300,000 people died in the Hutu-Tutsi violence and the conflict “had a very negative impact on women and young girls who experienced rape and other forms of sexual violence,” according to a 2011 Global Network of Women Peacebuilders report.

According to the Inter-Parliamentary Union, after the 2010 elections women in Burundi held 34 out of 106 seats in the lower house, about 32.1 percent, “as well as a significant rise in the upper house to 46.3 percent, due to a considerable degree to its quota system.“

But according to a 2011 report by the Global Network of Women Peacebuilders “the law does not specify the quota for women in other decision-making bodies. Thus in the top three offices i.e. President, First Vice President and Second Vice President, there are no women.”

SPPDF figures show that although the 30 percent quota is almost fully respected in elective agencies like parliament and local administration, there is still a long way to go to fill the gap in government institutions where women represent only an average of 20.15 percent.

Marceline Bararufise, a Member of Parliament (MP), head of the Parliamentary Education Sub-committee, and head of the Association of Parliamentarian Women in Burundi, told IPS that there is proof that women can perform better than men when it comes to public service delivery.

As SPPDF has launched a nationwide campaign for increasing women’s representation in the overall management of the country, Sindakira regrets that the law itself still discriminates against women.

“For example, we have been fighting for a parliamentary review of the matrimonial law so as to enable women to benefit from [inheritance], but the current situation is that we are even banned to raise the issue. This hampers all women’s efforts to stand for their rights,” Sindakira said. Here, women are not allowed to inherit and property passes from father to male heir.

She also regretted that so many women still consider that a review of the matrimonial law would be a breach of culture.

“Having educated women implies that the culture has also changed and thus no reason for the dark cultural practices to keep the Burundian woman behind,” said Sindakira.

Bararufise, who served as a governor before becoming an MP, points out though that Burundian woman have made significant steps towards self-empowerment.

“Now, apart from these political positions enshrined within the constitution, we’ve got so many woman engineers at building sites, doctors, heads of organisations, business women, security women, and so many others. This is to show that a woman of 20 years back is totally different from women now,” she told IPS.

She said that while she understood that Burundian culture was among several factors impeding women’s emancipation, it was important to note that women’s empowerment did not mean standing completely against culture as there remain some positive aspects of Burundian culture that need to be preserved.

“The only thing is that both men and women must understand that the sustainability of their family is the duty of both of them [and comes] with equal responsibility,” she said.

Bararufise regretted that Burundian women in leadership positions were disrespected by their male counterparts. “In some situations, women in positions of leadership find it difficult to command respect from men.”

She also acknowledged that a lot still needed to be done to evolve and change these current attitudes. “We want men to understand that women are able and have rights to contend for higher positions, instead of staying home.”