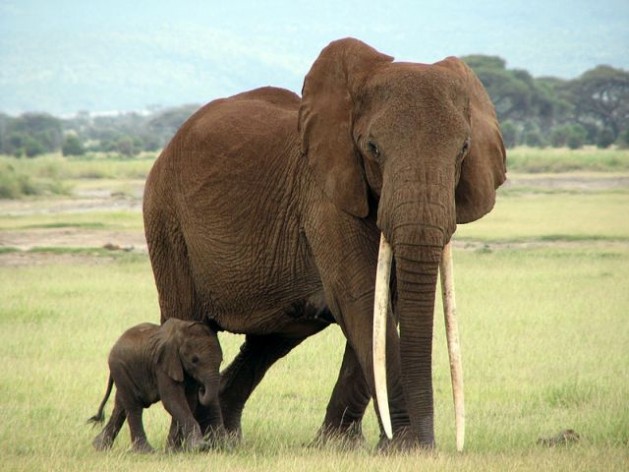 Some 50,000 elephants are being killed each year in Africa, alongside 1,000 rhinos, leaving perhaps as few as 250,000 elephants in the wild globally. Credit: PJ KAPDostie/cc by 2.0

Investigators say substantial evidence exists of Mozambique’s failure to abide by international conventions against wildlife trafficking, including to back up allegations of state complicity.

“We believe that there are ex-military officials who are providing political protection to the [trafficking] syndicates who are arming and funding these poaching teams." -- Allan Thornton

While President Obama last year mounted a new initiative by the U.S. government to tackle international wildlife trafficking, with a particular focus on ivory, some say Mozambique’s actions are undermining those efforts – and threatening these species worldwide.

A new petition, publicly announced Wednesday, now provides evidence on the issue and urges the president to make use of legal authorities to encourage Mozambique to crack down on poachers.

“Mozambique continues to play an ever-growing and uncontained role in rhinoceros and elephant poaching,” Susie Ellis, executive director of the International Rhino Foundation, one of the petitioners, told IPS.

“Although they have been given direction by the international community to enact certain controls, those have been only superficial and have had no meaningful effect. If you look at the large-scale poaching and illegal trade in rhino horn and elephant ivory out of Mozambique, it’s directly undercut President Obama’s [efforts] on wildlife trafficking.”

Increasingly working hand in hand with organised crime, poachers over the past three years have killed record numbers of elephants and rhinoceroses, particularly in Africa. Some 50,000 elephants are being killed each year in Africa, alongside 1,000 rhinos, leaving perhaps as few as 250,000 elephants in the wild globally.

Driving this illicit market is increased consumer demand in Asia, particularly in China and Vietnam. According to a U.N. report from last year, large seizures of ivory bound for Asia have more than doubled since 2009.

The new petition focuses on the central international agreement around wildlife trafficking, known as the Convention on International Trade in Endangered Species (CITES), and warns that Mozambique’s outsized role in African ivory poaching is diluting the convention’s effectiveness. The CITES standing committee is meeting next week in Switzerland.

“Given the scope and depth of the illegal killing and trade in rhino and elephant products by Mozambican nationals, we urge the United States to … enact substantial trade sanctions.”

Supporters say that strong action by the Mozambican authorities would have a significant and immediate impact on the global supply of illicit ivory.

Officials reportedly estimate that 80 to 90 percent of all poachers in South Africa’s massive Kruger National Park are Mozambican nationals. Local groups say that on most nights more than a dozen separate poaching parties can be prowling the park, most from well-documented “poaching villages” located across the border in Mozambique.

Meanwhile, enforcement of wildlife-related legislation in Mozambique is said to be essentially non-existent, with penalties for poaching and trafficking thus far not effective. Yet changing that situation has been complicated by what appears to be state collusion.

“It’s impossible for that level of illegal activity to be going on without high-level complicity,” Allan Thornton, president of the Environmental Investigation Agency (EIA), a watchdog group based here and in London that co-authored the new petition, told IPS.

“We believe that there are ex-military officials who are providing political protection to the [trafficking] syndicates who are arming and funding these poaching teams. There is substantial evidence implicating both the police and military.”

Mozambique keeps strict control over the types of weapons used by the country’s poachers, Thornton notes, yet such weapons are available to the military. Similarly, police and military uniforms have repeatedly been found in poaching camps.

Thornton says that putting together the new petition took several months, due to the mass of evidence available.

“If all Mozambican citizens were prevented from illicitly crossing over the border, poaching would drop significantly. But there has been no enforcement on the Mozambique side, despite legal obligations under CITES,” he says.

“We believe that the Mozambique government should be held accountable for their activities and act rapidly against these poachers, criminal syndicates and those protecting them. They could close this trade literally in a week.

Thornton says his office is not yet clear on whether the Obama administration has exerted diplomatic pressure on the Mozambique government over the issue of wildlife trafficking. But in filing the new petition, these groups are highlighting the fact that the president does indeed have the legal backing to act on the issue.

Under U.S. legislation known as the Pelly Amendment, the president is allowed to impose trade sanctions if a country is certified to be “diminishing the effectiveness” of an international conservation programme. (U.S. officials could not be reached for comment for this story.)

Further, there is notable precedent under which past determinations – set in motion by EIA petitions – have met with particular success. Two decades ago, for instance, a similar petition was lodged around the trafficking of rhinoceros and tiger parts through Taiwan into China.

That effort resulted in U.S. trade sanctions. Over the following two years, both the Taiwanese and Chinese governments engaged in a broad crackdown on these trades.

“This had a huge impact on reducing demand [for ivory] and reducing the poaching of rhinos virtually around the world,” Thornton says.

“We saw rhino populations stabilise worldwide, because two of the biggest markets had closed for demand. This is the same thing we’re now looking for in Mozambique.”

He continues: “And we’re hoping for a particularly prompt response, because the scope of illegal activities we’re currently seeing – where one country is sending hundreds of poachers into another country – is almost unparalleled.”