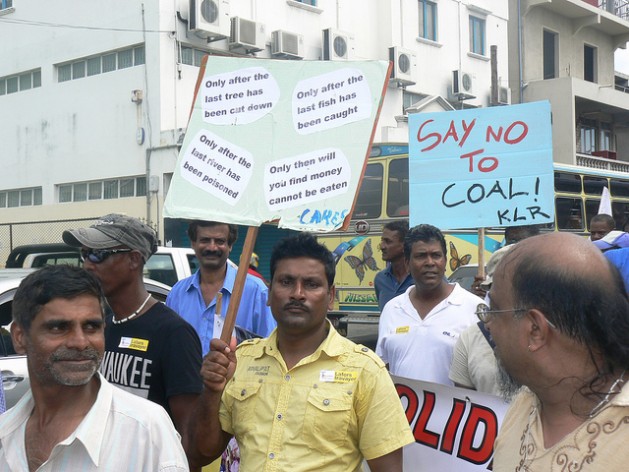 Mauritians protest against the construction of a 100-megawatt (MW) coal power plant in Pointe-aux-Caves, on the west of the island. They say the project will cause irreparable damage to them and the environment of this Indian Ocean island nation. Credit: Nasseem Ackbarally/IPS

WASHINGTON, Jul 7 2014 (IPS) - Landmark new policies that have sharply curtailed U.S. financing for international coal projects may be rolled back, the result of a sudden, polarised fight over a little-known government agency here.

The debate revolves around an entity called the Export-Import Bank, which for much of the past century has made federal money available to promote U.S. exports.

"To even have [the Ex-Im Bank] consider this coal project is an example of them going rogue – directly flouting restrictions they never supported in the first place.” -- Justin Guay

Multiple countries and international financial institutions have subsequently followed this model to put in place their own guidelines on energy-related funding.

“When it came to direct U.S. support, that policy change ended our ability to finance new coal plants, except in rare circumstances,” Justin Guay, a Washington representative for the Sierra Club, a conservation and advocacy group, told IPS.

“That was a historic step in curbing financing of the dirtiest and most outdated sources of energy. It was also one of the most significant pieces of progress we’ve had from this administration on fossil fuels.”

The agency did make exceptions for the poorest countries, however, allowing U.S. financing of coal projects in these countries if they use whatever is deemed the cleanest technology available. This loophole may now be significantly expanded to include many more countries, as part of a largely unrelated fight.

In recent months, conservative lawmakers here have seized on the institution, known as the Ex-Im Bank, as an example of government waste and corporate cronyism, given its role in subsidising certain U.S. businesses. The bank’s multi-year authorisation from the U.S. Congress needs to be renewed by the end of September, and in recent weeks a furious campaign has built around whether that approval should go forward.

On the chopping block may be the new coal policies, offered as a sweetener to draw back conservative lawmakers in favour of re-approving the Ex-Im Bank.

Leading bipartisan compromise proposals in both the U.S. House and Senate would now see the bank’s authorisation extended for several more years but would also largely gut the coal policy, according to multiple reports.

“If we are truly committed to protecting our global environment, the U.S. should lead the world in clean coal technology and export that technology to the rest of the world,” Joe Manchin, a key lawmaker in charge of oversight for the Ex-Im Bank, said in a statement last week.

Manchin, a moderate Democrat from a coal-rich state, has reportedly proposed significantly expanding the number of poor countries that would be eligible for Ex-Im assistance around coal projects. Similar proposals are being worked on in the House of Representatives, though none of these have yet been made public.

Other lawmakers, too, have recently switched their views on the bank’s reauthorisation due to political pressures around coal. Presumably, a change on this issue could woo them to back the agency once again.

“[I]t is inappropriate to use the bank’s financing mechanisms to drive an ideological agenda rather than promote U.S. exports,” Shelley Moore Capito, a Republican in the House, said recently. “The administration’s policies come at a time when we should be ensuring the United States is leading the world in developing new coal plant technologies.”

Still, for some of the Ex-Im Bank’s most ardent critics, the attempt to link the agency’s re-authorisation to a weakening in its coal policies is not working.

“The Obama administration’s targeting of coal is absurd, but it is not important in the debate over the Export-Import Bank,” Dan Holler, communications director for Heritage Action for America, a conservative advocacy group, told IPS.

“While some lawmakers and special interest groups want to talk about coal, the real issue is whether the Bank’s charter deserves to be authorized at all. Heritage Action believes it should be allowed to expire.”

The Ex-Im Bank’s new restrictions around coal would likely have a significant impact on overall U.S. support for such projects worldwide.

Of the agency’s massive budget – this year, 32 billion dollars – around a quarter consists of energy-related lending. And while assistance for coal projects has gone up and down over time, during some years the agency has offered some two billion dollars in financing for the industry.

That’s been seen by some as a misalignment of priorities: even as coal plants in the United States have been shutting down around tightened carbon regulation, the U.S. government has continued to finance more and more such projects overseas.

Perhaps unsurprisingly, the Ex-Im Bank’s new coal policy was controversial from the start – not only among some lawmakers but also, reportedly, among the agency’s management. Just weeks after the new requirements were voted in, lawmakers were able to pass a little-noticed legal provision that temporarily stayed the change through September.

The bank, meanwhile, has used this interlude to begin consideration of a massive and contentious coal-fired power plant in Jharkhand, in northeastern India. That development was announced at the beginning of this month.

“The Bank is in the process of conducting a full due diligence review of the financial, technical and environmental aspects of the project,” Stevan M. Horning, a spokesperson for the agency, told IPS. He confirmed that, because of the recent legal wrangling, “no analysis is being performed with respect to the … project’s compliance with” the new coal guidelines, though it will be reviewed for the agency’s pre-existing safeguards.

Horning noted that no decision would be forthcoming on the project, known as Tilaiya, until next month at the earliest.

“President Obama pushed for this new rule over the agency’s objections, and now we’re seeing them openly defy the president’s actions,” the Sierra Club’s Guay says.

“The agency operates under the president’s administration and is part of the push to fulfil his agenda. So to even have them consider this coal project is an example of them going rogue – directly flouting restrictions they never supported in the first place.”

He continues: “The administration and Congress will have to actively rein them in.”