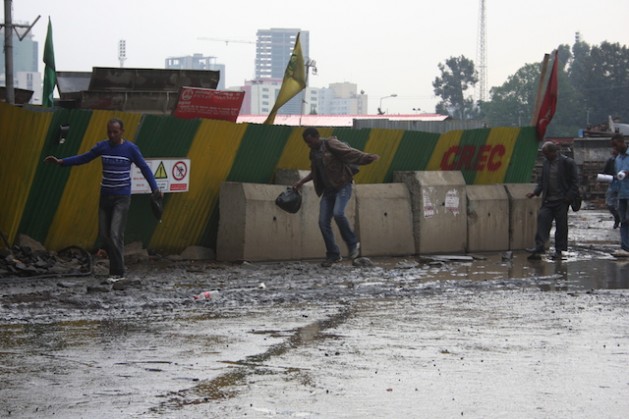 Pedestrians stepping gingerly to avoid the puddles and mud around Meskal Square in the centre of Addis Ababa, Ethiopia’s capital. Credit: James Jeffrey/IPS

ADDIS ABABA, Jul 1 2014 (IPS) - The streets of Addis Ababa are increasingly turning into water-logged obstacle courses as downpours increase in the run up to Ethiopia’s July to September rainy season. Strangers link hands to steady themselves as they step high and gingerly over the spreading puddles and slippery mud.

Sustainable drainage systems may not sound like an exciting topic to get the heart beating faster, but it is one of increasing importance in Ethiopia and especially in Addis Ababa as the capital city grows, construction sites abound, its population swells and demand for accessible, clean water increases — and the downpours keep coming.

“Despite Ethiopia being called the water tower of Africa, it’s actually more of a water highway due to runoff and a lack of storage capacity,” Manaye Ewunetu, managing director of London-based ME Consulting Engineers that works on water systems in the United Kingdom and Ethiopia, tells IPS.

Due to its mountainous topography Ethiopia’s water storage capacity is relatively low at about 30 percent, compared to countries like Australia where it is nearer 80 percent.

“I have to set the alarm on my mobile and wake up around midnight. I go outside to join the neighbours queuing by the tap, it can take up to three hours before I go back to bed.” -- Meleshew.

This issue affects a population of 92 million that is projected by the World Bank to grow to 145 million by 2050, hence efforts by the likes of Deutsche Gesellschaft für Internationale Zusammenarbeit (GIZ), a German government-backed international enterprise for sustainable development trying to enhance the resilience of small-scale agriculture through sustainable land management practices.

But water issues are also sharply felt in urban areas like Addis Ababa, with a population that has grown from around 2.7 million in 2008 to a current population estimated at over three million, and likely to reach more than five million by 2037, according to the Ethiopian Central Statistics Agency.

Addis Ababa is increasingly emerging as an important world city, home to the African Union, the United Nations Economic Commission for Africa, and many other international organisations, embassies and consulates.

New York-based consultancy A.T. Kearney in the emerging cities outlook of its 2014 annual Global Cities Index ranked Addis Ababa, after Jakarta and Manila, as the third-most likely city to advance its global position. “At current rates of improvement, the Ethiopian capital is among the cities closing in fastest on the world leaders — despite current distances — in income equality, healthcare and business transparency,” states A.T. Kearney’s report.

Despite the plaudits, the speed of this young city’s development — other demographic growth estimates put Addis Ababa’s population nearer 5 million now and increasing up to 8 million by 2030 — threatens to overwhelm it and the rivers and springs that led to its creation in 1886 as the country’s New Flower, the translation of its Amharic name.

Waste disposal, inadequate drainage, industrial and petrol station run off and discharge into water sources, create significant health hazards in the city. This is exacerbated by flooding.

“Floods have significant health hazards by [carrying] pathogens and pollutants which can contaminate food and water sources,” Wendwosen Feleke, a water and sanitation expert for the World Bank Ethiopia Country Office, tells IPS.

About 14 million birr (700,000 dollars) is spent by the Ethiopian Ministry of Health treating water-borne diseases each year, an estimation that does not include other economic losses such as loss of time and loss of earnings due to absence from jobs.

There are other economic implications, also.

“Inadequate drainage can result in deterioration or even destruction of infrastructure meaning it may fail to reach its design life,” James Markland, a senior transport specialist with the World Bank Ethiopia Country Office, tells IPS. “[This reduces] the economic effectiveness of substantial investments made.”

Furthermore, 24-hour-a-day water availability is all but unknown in the city, despite an average yearly rainfall of 1,180mm which is just under what rain-drenched U.K. experiences.

For the majority of Addis Ababa households the norm is to fill water receptacles during the periods when water flows from taps: in some parts of the cities this is early in the morning, in other parts it is late at night.

“I have to set the alarm on my mobile and wake up around midnight,” says 24-year-old Meleshew. “I go outside to join the neighbours queuing by the tap, it can take up to three hours before I go back to bed.”

Meleshew lives with three friends in a small house to the west of Addis Ababa where they take it in turns to wake to refill their house’s water container once every few days.

“It’s hard because during the daytime I am looking for a job and so I’m tired at the end of the day,” Meleshew says. Often she finds herself nodding off while queuing for her turn, and typically wakes up with a headache after a night of interrupted sleep.

Many other city dwellers can’t even rely on a water source at home, hence the sight of people walking along the city’s roads carrying large yellow water containers on their backs after visiting public water points.

The authorities in Addis Ababa are not turning a blind eye to the relentless expansion of the city, and there is, as a result, a so-called city master plan that aims to mitigate the city’s disorganised growth and guide efforts to modernise it over the next 25 years.

But, some argue, presently the master plan doesn’t address the water issue adequately.

“Unless you put a drainage master plan into the city’s master plan there will be chaos,” says Manaye, who has watched the city expanding for the last 27 years during visits from U.K..

And despite the relevant government and city departments producing the necessary manuals, lack of coordination and willpower means little of tangible worth is occurring on the ground, he says.

A robust water and drainage system would have much needed aesthetic benefits for the city, in addition to the benefits of tackling pollution, disease and lack of potable water.

“When you come from outside [and see Addis Ababa] it is very disturbing—it’s one of the most polluted cities in the world,” Manaye says.

Making the most of existing waterways and constructing ponds and parkways to absorb runoff would help make the city more attractive and offer huge investment opportunities for recreation and tourism, Manaye says.

Currently the city has very few parks, and a common lament from ex-pats in Addis Ababa is its lack of water features. In most global cities water bodies within developments can be used to boost marketing and contribute to increased property values.

“There is huge potential for regeneration is Addis,” Manaye says. “Water gives life to a city.”

Issues related to water, rivers and runoff are given increasing precedence due to the effects of climate change. The result, according to those pushing for improved drainage systems, is the need for radically different thinking at all levels to manage infrastructure and water issues. But that could be hard to achieve, partly due to Ethiopians’ tendency to accept hardships and soldier on.

“It’s not normal but it becomes normal,” Meleshew says of water shortages in Addis Ababa. “We adapt.”