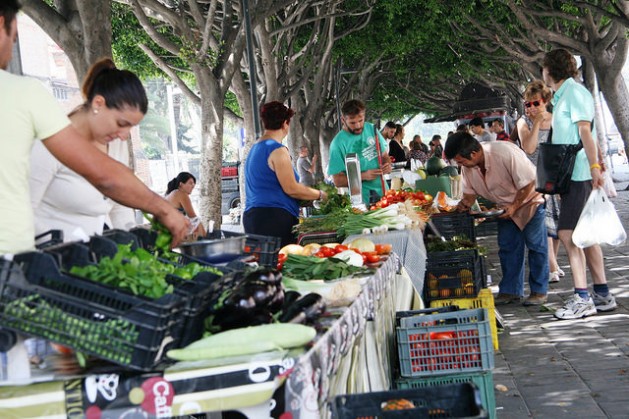 An ecological market that is set up every weekend on one of the busiest streets in Málaga. Similar markets can be found in towns and cities all around Spain. Credit: Inés Benítez/IPS

MALAGA, Spain, Aug 12 2014 (IPS) - José María Gómez squats and pulls up a bunch of carrots from the soil as well as a few leeks. This farmer from southern Spain believes organic farming is more than just not using pesticides and other chemicals – it’s a way of life, he says, which requires creativity and respect for nature.

Gómez, 44, goes to organic food markets in Málaga to sell the vegetables and citrus fruits he grows on his three-hectare farm in the Valle del Guadalhorce, 40 km west of Málaga, a city in southern Spain,

And every week Gómez, whose parents and grandparents were farmers, does home deliveries of several dozen baskets of fresh produce, “thus closing the circle from the field to the table,” he told Tierramérica on his farm.

The economic crisis in Spain, where the unemployment rate stands at 25 percent, hasn’t put a curb on ecological farming. In 2012, organic farming covered 1.7 million hectares of land, compared to 988,323 in 2007, according to the latest statistics from the Ministry of Agriculture and Environment.

“Ecological farming is growing in Spain and Europe despite the crisis because those who consume organic produce are loyal,” agricultural technician Víctor Gonzálvez, coordinator of the non-governmental Spanish Society of Organic Agriculture (SEAE), told Tierramérica.

Organic food markets have mushroomed in the streets and plazas of cities and towns around Spain, and some supermarket chains now sell ecological produce.

The southern community or region of Andalusía has the largest extension of land under organic farming: 949,025 officially registered hectares, equivalent to 54 percent of the national total, according to the Ministry of Agriculture.

Most production from Andalusía is exported to other European countries, like Germany and the United Kingdom – which seems contradictory to those in favour of organic farming that truly provides a local alternative to intensive, industrial agriculture, with a short food supply chain.

“It doesn’t make sense to talk about exporting ecological foods because production should bring benefits to the local economy,” Pilar Carrillo told Tierramérica from her La Coruja farm in the municipality of Tacoronte on Tenerife, one of Spain’s Canary Islands.

She and her partner, Julio Quílez, have been living there for a year with their young son. They have less than half a hectare of land, where they practice permaculture – the use of ecology and local ecosystems to design self-sustaining productive landscapes that, once established, need a minimum of human intervention. They sell their produce every Saturday in the nearby farmer’s market.

“When you buy local ecological products you are eating healthy food, you’re interacting with people from the countryside, and you generate wealth in your local surroundings,” engineer Juan José Galván, who for five years has been buying food in organic markets in Málaga, told Tierramérica. 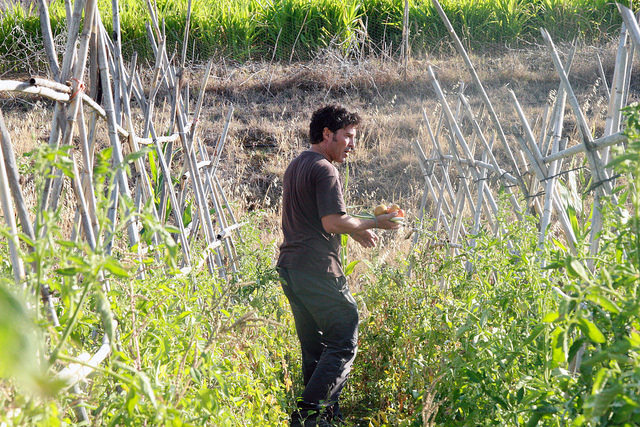 José María Gómez walking among the tomato plants on his Bobalén Ecológico farm in the Valle de Guadalhorce near the southern Spanish city of Málaga, where he grows organic vegetables and fruits. Credit: Inés Benítez/IPS

Spain, with its mild climate, has the largest area dedicated to organic farming in the European Union, according to Eurostat 2012 figures, and the fifth largest area in the world, after Australia, Argentina, the United States and China, according to a report by the International Federation of Organic Agriculture Movements.

But the controls and certification of ecological agricultural production, which in Spain are carried out by both public and private bodies, are neither simple nor free of cost.

To be sold as organic food, products must carry a label with the code of the corresponding authority in each community, the Ministry of Agriculture explains on its website.

Certification of ecological farming takes at least two years to obtain, and the inspections are thorough, farmers told Tierramérica. The requisites and controls involved and the economic effort entailed drive up the prices of organic products, they argued.

Quílez, who grows aromatic and medicinal plants in Tenerife, said he has to pay for certification “as an ecological farmer and also as a seller of organic produce, which doubles the cost; a large part of the price of ecologically produced food goes into red tape.”

According to Gonzálvez, public funds in Spain go more towards conventional agricultural production and research in biotechnology than into supporting ecological farming.

He said farmers “are afraid to take the leap” into this kind of alternative production because there are no advisory services, unlike in intensive, industrial agriculture.

“Ecological agriculture is very empirical. If an aphid attacks my melons, I plant beans next to the melons because they draw the aphids away. Every year you get wiser,” Gómez said, standing among his tomato plants on his Bobalén Ecológico farm.

Gómez, who has tousled dark hair and skin tanned by the sun, argues that while “big industry produces market-oriented varieties, ecological agriculture, especially local farming based on geographical proximity, focuses on producing quality food,” as well as preserving the environment and soil fertility.

Critics argue that organic products are expensive and the production methods inefficient, “but it depends on what you buy, and where,” Esther Vivas, with the Centre for Studies on Social Movements at the Pompeu Fabra university in the northeast city of Barcelona, wrote in her article “Who’s afraid of ecological agriculture?”

Vivas told Tierramérica that although the level of consumption of organic products in Spain is still low compared to conventional farm products, the market for ecological produce is growing, as interest has been boosted by various scandals involving food products.

Galván said that while it is true that the higher cost of organic products can turn away consumers, “demand is steadily growing.”

“The real revolution has to come from below, from the consumer who goes to the markets to buy and who demands high-quality products,” Gómez said.

The ecological farmer – who worked for years as an environmental agent – stressed the social dimension of organic agriculture and short food supply chains, pointing to “the affection that your customers give you, as they are aware of the health benefits of the food and of the sustainability of the production.”

Quílez, who left a well-paid job in computers to dedicate himself to ecological farming, said “exploitative agriculture undermined food sovereignty,” and this is seen clearly in the Canary Islands “where 85 percent of the products consumed come from outside.”

On Gómez’s farm it’s time to plant beans, potatoes, cauliflower and broccoli to harvest in October and November. “I get up at 5:30 in the morning and farm for 15 or 16 hours,” he said.