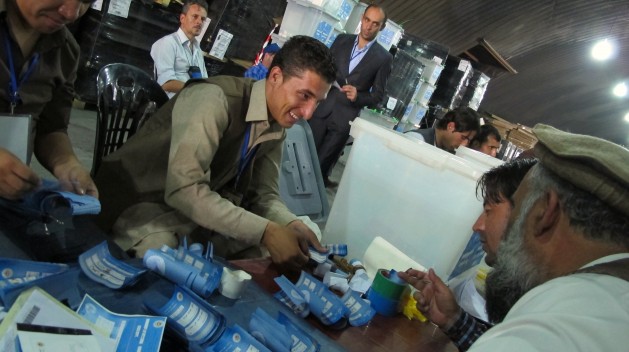 KABUL, Aug 20 2014 (IPS) - A knife fight late Tuesday among several auditors at the Independent Electoral Commission (IEC) still inspecting the results of the presidential elections held in mid-June could be the stab in the back for what has been a painful election process.

The vote audit process was resumed following a three-hour delay on Wednesday, a commission official said.

Two months after Afghans voted in a second runoff for election of the country’s president, ballots are being recounted amid growing questions on who is really arbitrating the process.

"What we see is what we expected: an endless fight between the two sides as each ballot is disputed” – Thijs Berman, chief observer of the European Union

The four corrugated iron barracks east of Kabul that constitute the centre of the Independent Electoral Commission (IEC) of Afghanistan in which the 22,828 ballot boxes are piled up, have become the Afghan insurgency´s main target.

In the June 14 runoff, presidential candidate Ashraf Ghani Ahmadzai won 56.44 percent of the votes, while his opponent, Abdullah Abdullah, received 43.56 percent, despite having been the most voted candidate in the first runoff on April 5.

The turnout was equally surprising: eight million out of 12 million voters, an unlikely figure given that most polling stations were reportedly empty on election day.

With Abdullah Abdullah’s allegations of massive fraud having put the electoral process on the brink of collapse, the two candidates were persuaded to agree to a full ballot recount.

In an audit that started mid-July, the ballot boxes are being examined by a team formed by auditors of both candidates and members of the IEC. Afghan as well as European Union observers are also on the spot in a process closely monitored by U.N. assistants.

“I have spent the last two weeks taking part in this massive farce,” Abdullah Abdullah´s auditor Munir Latifi told IPS. “The United Nations and the Independent Electoral Commission are working together so that Ghani takes the win but there´s nobody supporting us,” he said before returning to his seat.

Latifi has to discuss whether the handwritten “V”, “X” or a circle on each candidate´s tick box is repeated in several of the ballots, or if it is really “one person, one vote”. Boxes suspicious of fraud are put in quarantine and records are taken by hand in a notebook.

Resources may look scarce but Shazad Ayubee, a Pashtun from Paktiya in southeast Afghanistan and one of Ghani´s auditors, told IPS he was “a hundred percent” satisfied with the process, although “things would be smoother if Abdullah´s auditors didn´t struggle to delay the publication of the results by any means necessary.”

Similar handwriting among different ballots “doesn´t necessarily imply fraud,” he added. “In the most remote villages of Afghanistan almost everybody is illiterate. Families simply show up at the polling stations and the one who can write marks their ballots,” explained Ayubee during the lunch break.

The most suspicious ballot boxes are those that arrive unlocked, the ones that boast over the maximum of 600 ballots, or even random objects such as traditional felt hats or tobacco packets. Many auditors claim that full boxes arriving from Taliban-controlled areas should be systematically discarded because the Afghan armed opposition consistently prevents the population from taking part in elections.

But Ayubee says he knows the reason behind the unexpected turn out in Taliban strongholds: “Unlike Pakistani or Uzbek Taliban, the Afghan Taliban told people to vote for Ghani because he is a Pashtun – a majority of the Afghan insurgents belong to that ethnic group. Everyone knows that Ghani will defend their interests much better than a Tajik like Abdullah Abdullah.”

Mid-morning, Noor Mohammad Noor, spokesman for the IEC, appears in the press room opposite the barracks and starts his speech with a “sincere commitment to democracy” as opposed to “unfounded rumours and lies over the development of the audit.”

The IEC spokesman describes a “joint effort of 220 IEC workers, 305 auditors for Abdullah, 306 for Ghani and 1014 international observers.”

Asked by IPS whether the auditors are skilled in graphology, Mohammad showed no sign of hesitation: “This is a process under the close guidance of the United Nations, which displays 50 advisors on a daily basis. Besides, it´s the United Nations which has the last word over the ballots.”

Speaking to IPS by phone from his office in Brussels, Thijs Berman, chief observer of the European Union, told IPS that it was “too early” to take stock of the process. “What we see is what we expected: an endless fight between the two sides as each ballot is disputed.”

Commenting on the fact that the United Nations was acting both as adviser for the electoral process and as arbitrator in the recount, Berman said that “in countries like Spain or Holland we would have relied on a fully external body but in the case of Afghanistan we are dealing with very young institutions that do not yet have a significant credibility.”

“I agree that the U.N. role can be criticised, but what is the alternative,” he asked before reiterating that the E.U. delegation is determined to conduct its work “even in the case that the United Nations does not fulfil its part.”

Despite repeated calls and emails from IPS, the U.N. spokesman only agreed to respond to a questionnaire sent via e-mail. Jeff Fischer, senior international expert on elections and head of the U.N. Independent Electoral Commission advisory team, labelled the scale and scope of the audit as “unprecedented in the history of the United Nations.”

He stressed that all the auditors had received training on IEC procedures and invalidation and recount criteria before they could start working as advisors.

Regarding rumours concerning alleged U.N. backing for the Pashtun candidate, Fischer was blunt: “Final decisions as to whether votes are valid or invalid are taken by the IEC Board of Commissioners.”

Confusion over who has the last word in the audit grows while pressure from the outside strives to break the poll deadlock.

NATO Secretary-General Anders Fogh Rasmussen has recently warned that the alliance will be forced to take a decision regarding the withdrawal of foreign troops from Afghanistan unless the new Afghan president signs the security agreements.

According to Rasmussen, the NATO summit scheduled for September 4-5 in Wales would be “very close” to a deadline for taking that decision.