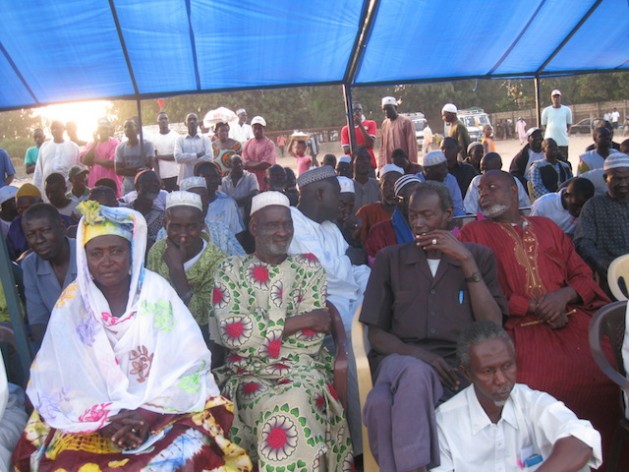 BANJUL, Aug 28 2014 (IPS) - With the approach of the Gambia’s 2016 presidential elections, which will see President Yahya Jammeh seek re-election for a fifth, five-year tenure, more than a dozen opposition activists have been arrested, detained and prosecuted in the past eight months.

The leader of the opposition United Democratic Party (UDP), Ousainou Darboe, told IPS, “the democratic space, instead of being expanded is constricted, restricted and shrinking.”

Just in the past eight months, 15 of Darboe’s party members have appeared before a court of law. Twelve members of the party’s youth wing were arrested in February for “an unlawful gathering” but where later acquitted by the court in March.

“The security forces have been scuttling our efforts by arresting my party supporters and I believe this is done with the full encouragement of the ruling party,” Darboe said.

Ebrima Solo Sandeng, the secretary general of youth wing of the UDP, was also acquitted in March on a charge of giving false information when obtaining a permit from the police to hold a social gathering for his party in Tujerang village, which lies some 40 km from Banjul. According to the state, Sandeng held a political rally instead of a social gathering.  Before his acquittal, Sanneh was originally sentenced in December 2013 to five years in jail after initially being found guilty of sedition.

Lasana Jobarteh, an audio visual expert attending the event, was not as lucky.  Jobarteh, 59, was charged with broadcasting without a license for providing live coverage of the UDP’s political gathering for online Gambian radio stations via skype. In July Jobarteh was found guilty and issued with a fine of 50,000 dalasis (about 1,200 dollars).

“I shocked by the judgment,” Darboe said of Jobarteh’s conviction.

“I don’t want to say more because we’ve filed an appeal. But I just have to repeat that I am thoroughly shocked. You don’t have to have any legal mind to know it’s not right. This is common sense.”

The case of Bai Mass Kah, from the opposition People’s Democratic Organisation for Independence and Socialism (PDOIS) party, is the most recent one.

“My party will never boycott the elections. The atmosphere is not a good one but it will not make us abandon our responsibilities. We have to take on the ruling party.” -- Hamat Bah, leader of the opposition National Reconciliation Party

On Sept. 9 Kah will appear before a court in Banjul, the country’s capital, to face judgement on a charge of sedition. Sedition has a broad definition in the Gambia – it means saying anything that tarnishes the image of the country, the government or the president. Kah’s crime was telling a ruling party supporter not to paste a photo of Jammeh on his car.

“The election is not an event but a process and the stage we’re in is very crucial,” political analyst Bakary Touray told IPS.

“If this stage [the pre-election period] is ignored, an unfair election could be declared fair by even international election observers [who are only present to witness the elections themselves and not the run-up process] as we have seen it happen in many elections across Africa.”

However, Touray says the current oppressive political environment is not unfamiliar.

“What we have seen in recent months — the arrest and prosecution — is a tactic by the ruling regime to weaken the opposition. Technically, the election has begun.”

“People are being arrested and detained beyond the 72-hour limit and the president is making utterances that violate the constitution. This is not a good situation for the country.”

Besides facing arrest and prosecution, the opposition claimed that they are being denied permits by the police to hold political rallies, which they are required to apply for according to the Public Order Act.

“We wanted to tour the country, meet the people and discuss with them our political agenda. Unfortunately, the Inspector General of Police has for the second time in May refused us a permit,” Bah said.

Bah said the reasons for refusing the permit “were not genuine.”

“In a letter dated Mar. 11, he [the Inspector General of Police] said there were programmes scheduled ahead of our programme, but he did not specify. In our second attempt, he said in a letter dated May 22, they were preoccupied with a women’s advancement forum, which was taking in Banjul, not in Upper River Region where we requested to go to for our rally. Absolutely, they [the reasons for refusal] were baseless.”

Darboe said that after the 2011 presidential elections, which Jammeh won in a landslide, there had been an unequivocal promise from the Independent Electoral Commission to ensure electoral reforms. However, the opposition overwhelmingly boycotted the parliamentary and local government elections in 2012 and 2013, respectively, after their demands for electoral reforms were unmet.

According to Darboe, if the playing field for multi-party elections is not levelled, his party may not participate in the upcoming presidential elections.

“We might as well call it quits. There’ll be no use in contesting an election that will not be fair. You don’t just want to go through the motions of electioneering when in fact [it is a] farce and mock election.”

“My party will never boycott the elections,” he said. “The atmosphere is not a good one but it will not make us abandon our responsibilities. We have to take on the ruling party.”

Despite their apparent division, the opposition believe that political reforms are needed in Gambia.

“We need a comprehensive electoral reform and the institution that has the moral courage to ensure that the electoral laws as reformed will be implemented,” Darboe said.

“You can reform electoral laws but if you have a rogue institution [implementing them], the usefulness of reform will be questionable. And we need men of integrity to be in charge.”