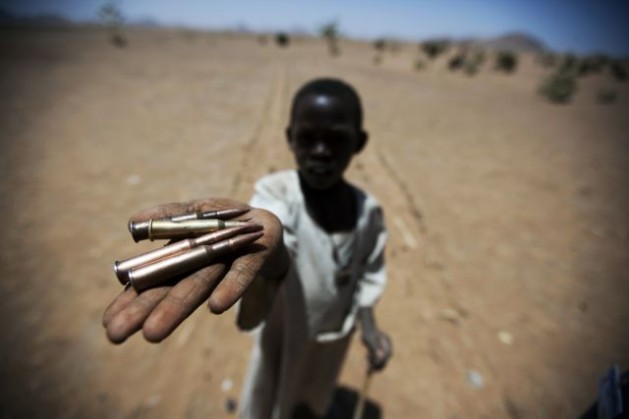 UNITED NATIONS, Aug 4 2014 (IPS) - The headline of every article about the relationship between climate change and conflict should be “It’s complicated,” according to Clionadh Raleigh.

Director of the Armed Conflict Location and Event Data Project, Raleigh thinks that researchers and the media have put too simplistic a spin on the link between climate change and violence.

“It’s just appalling that we’re at this stage 100 years after environmental determinism should have been rightly dismissed as any sort of framework for understanding the developing world,” -- Clionadh Raleigh

In recent years, scientists and the United Nations have been increasing their focus on climate conflict. The debate ranges from sensational reports that say the world will soon erupt into water wars to those who do not think the topic is worthy of discussion at all.

Much of the uncertainty over the connection between climate change and armed conflict exists because it is such a fledgling area of interest. According to David Jensen, head of the U.N. Environment Programme’s (UNEP) Environmental Cooperation for Peacebuilding programme, the relationship between climate change and conflict began receiving significant U.N. attention only in recent years.

“While the debate on this topic started in 2006-2007, there remains a large gulf between what is discussed at the global level and in the Security Council, and what is actually happening at the field level,” he told IPS.

“A number of studies have found a statistical link between climate change and conflict, but they tend to focus on a specific area and cover a short time period,” Halvard Buhaug, director of the Peace Research Institute Oslo’s Conditions of Violence and Peace department, told IPS. “The challenge is to determine whether these studies are indicative of an overarching, more general trend, which hasn’t been documented yet.”

Much of the nuance behind the climate conflict correlations is lost when technical scientific reports are spread to a wider audience.

Buhaug told IPS that “parts of the public debate on climate change and violence are accurate, but there is an unfortunate tendency, whether by researchers or the media, to exaggerate the strength behind the scientific research and under-communicate scientific uncertainty.”

“In some media reports, phrases like ‘may’ are turned into ‘will’ and the future is portrayed in… gloomy shades.”

Following is a sampling of the back-and-forth debate taking place in the scientific community:

According to Buhaug (2010), the prevalence and severity of African civil wars has decreased since 2002 in spite of increased warming, defying Burke’s hypothesis. In his study, he found no evidence of a correlation between temperature and conflict.

Hendrix and Salehyan (2012) found that extreme deviations in rainfall, whether it was more rain or less rain than usual, are positively associated with all types of political conflict in Africa.

Benjaminsen et al. (2012) found little evidence for claims that rainfall variability is a substantial driver of conflict in Mali.

In 2013, Hsiang, Burke and Miguel published a meta-analysis of 60 studies on the subject in Science. They found that the majority of studies from all regions support the conclusion that climate change does and will lead to higher levels of armed conflict.

In a response in Nature Climate Change, Raleigh, Linke and O’Loughlin (2014) criticized the above study for using faulty statistics that ignored political and historical drivers of conflict and overemphasized climate change as a causal factor.

A deeper understanding of the connection between climate change and conflict requires a careful examination of the drivers of violence and the role of the environment in individuals’ livelihoods.

Cullen Hendrix, assistant professor at the Josef Korbel School of International Studies, told IPS that the relationship between climate and conflict is mediated by levels of economic development.

Climate conflict is most likely to occur in rural, non-industrialised regions “where a large portion of the population is still dependent on the natural environment for their income and sustenance,” he said.

In most sub-Saharan African countries, more than two-thirds of the population is employed in agriculture. A change in climate conditions could have negative impacts on stability. However, researchers would emphasise that it is important not to jump to conclusions and assume that climate change will necessarily lead to conflict.

“Almost all of us would acknowledge that other factors such as political exclusion of persecuted minority groups or economic inequalities or weak central government institutions matter more [than climate]” Hendrix told IPS. “But that’s not the same as saying that climate doesn’t matter.”

When asked about the biggest lessons learned during his time with UNEP, Jensen had a similar take. “When you’re trying to rebuild communities and livelihoods, you can’t just focus on a single stress factor like climate change, you have to be looking at multiple factors and building resilience to all kinds of shocks and stresses…including climate change but not exclusively.”

Hendrix expects the next generation of scientific work to examine how drought, floods, desertification and other climate change phenomena could impact conflict “through indirect channels such as suppressing economic growth or causing large-scale migration from one country to another.”

In post-conflict situations and fragile states at risk of climate conflict, governance and land distribution have emerged as key considerations.

“Clarity on land and resource rights is one of the key prerequisites to reducing vulnerability and supporting livelihood recovery,” Jensen told IPS.

Clionadh Raleigh, who is also a professor of Human Geography at the University of Sussex, believes that government land distribution policies are often the real source of conflict, but their impact is obscured by the climate conflict debate.

“If you were to ask somebody in Africa ‘what are the conflicts about here?’ they might readily say something like land or water access,” she told IPS. “But land and water access are almost entirely determined by local and national government policy, so they don’t have almost anything to do with climate.”

Certain leaders have attempted to blame climate change for the consequences of their own disastrous policies, according to Raleigh. Robert Mugabe has blamed Zimbabwe’s famines on climate change, instead of his own corrupt land reallocation policies.

Omar al-Bashir blamed the Darfur conflict on drought instead of the government’s shocking political violence against a large chunk of its population.

While climate change itself is a topic of utmost importance, is it even worth it to talk about its connection to armed conflict? Raleigh doesn’t think so.

She believes the climate conflict debate falls into a trap called environmental determinism, a school of thought that asserts that climatic factors define human behaviour and culture. For example, it assumes that a society will act in a certain way depending on whether it is located in a tropical or temperate region.  Environmental determinism gained prominence in the late 19th century but soon declined in popularity amidst accusations of racism and imperialism.

“It’s just appalling that we’re at this stage 100 years after environmental determinism should have been rightly dismissed as any sort of framework for understanding the developing world,” Raleigh told IPS.

Buhaug believes the climate change and armed conflict debate does have merit, since most scientists are careful to not ascribe too much causal weight to one particular factor.

However, he does worry that “there is a tendency in research, but especially in the communication of research, to ignore the importance of political and socio-economic conditions and the motive and agency of actors.”

Raleigh, for her part, wishes the whole debate would just go away.

“People have an often mistaken interpretation of what’s going on at the sub-national level, on the local level within African states and developing countries,” she told IPS. “And they just assume that violence is one of the first reactions to societal change, when it is far more likely to be cooperation.”

Environmental cooperation occurs at both the inter-state and local levels, according to Jensen. At the local level, “in Darfur, we see different groups coming together to co-manage water resources.” At the trans-national level, “there’s a lot of talk about water wars between countries, but we often see the opposite in terms of much more cooperation between states over shared water resources.”

Following this line of thinking, the U.N. has tried to expand the climate conflict discussion from focusing on problems to exploring new solutions.

In November 2013, it launched a new website for experts and field practitioners to share best practices in addressing environmental conflicts and using natural resources to support peacebuilding, Jensen told IPS.

Climate change will most likely wreak havoc on the natural world and it may create the conditions for increased violence, but environmental scientists and practitioners agree: the future is not determined.