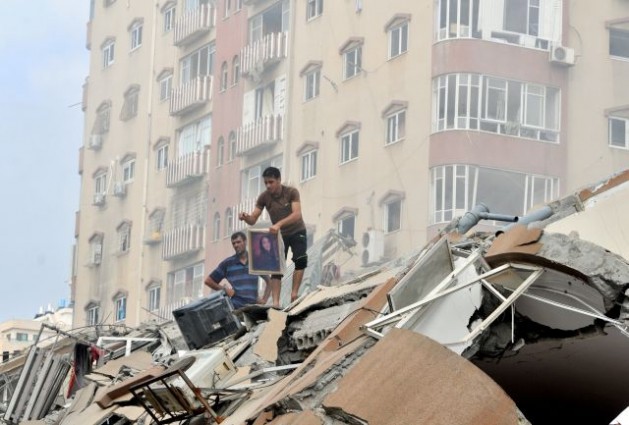 Palestinians collect their belongings from under the rubble of a residential tower, which witnesses said was destroyed by an Israeli air strike in Gaza City on Aug. 24. Credit: UN Photo/Shareef Sarhan

WASHINGTON, Sep 9 2014 (IPS) - Israel and its supporters abroad have parried accusations of indiscriminate destruction and mass killing of civilians in Gaza by arguing that they were consequences of strikes aimed at protecting Israeli civilians from rockets that were being launched from very near civilian structures.

That defence has already found its way into domestic U.S. politics. A possible contender for the Democratic nomination for president, Sen. Elizabeth Warren, defended her vote for more military aid for Israel during the Israeli assault on Gaza by citing the rocket launch defence.

“[W]hen Hamas puts its rocket launchers next to hospitals, next to schools, they’re using their civilian population to protect their military assets,” said Warren. “And I believe Israel has a right, at that point, to defend itself.”

But although some Hamas rockets were launched near homes or other civilian structures, military developments on both sides have rendered that defence of Israeli attacks on civilian targets invalid.

The rocket launchers for Hamas’s homemade Qassam missiles consist of simple tripods that can be removed in seconds, and the extensive Hamas tunnel network has given it underground launching sites as well as storage facilities for its larger, longer-range Grad and M-75 missiles.

On the other side, the Israeli Air Force possesses air-to-ground missiles that are so accurate that they can destroy a very small target without any damage to civilian structure even if it is very close.

A video released by the Israel Defense Forces (IDF) in a report on Hamas’s “illegal use of civilian infrastructure” last month shows an attack – obviously by an Israeli drone — on an underground rocket launcher only a few metres away from a mosque causing no damage whatever to the mosque.

These technological changes take away any justification for flattening civilian buildings even if a rocket launch site is nearby. In fact, however, the evidence now available indicates that Hamas launch sites are not that close to hospitals, schools and mosques.

The IDF sought in mid-July to use the rocket launcher defence to explain the damage to Al Wafa Rehabilitation and Geriatic Hospital in eastern Gaza City from 15 rockets, which forced the staff to evacuate its patients. An IDF spokesman said the military had “no choice” because rockets had been launched from very near the hospital.

Clearly revealing that the rocket launch justification for the attack was a ruse, however, the spokesman revealed to Allison Degler of Mondoweiss that the alleged launch site was 100 metres from the hospital. That would have been far more space than was needed to strike the launch site without any damage to the hospital whatever.

A report released by the IDF Aug. 19 included an aerial view of Al Wafa Hospital with two alleged rocket launching sites marked at locations that appeared to be much farther from the hospital than the 100 metres claimed by the IDF spokesman.

The IDF nevertheless went so far as to declare on Jul. 21, “Hamas fires rockets from Wafa hospital in the Gaza neighborhood of Shujaiya.”

When the IDF destroyed Al Wafa hospital completely by airstrikes on Jul. 23, it abandoned the pretense that the reason was a Hamas rocket launch site. Instead it released a video purporting to show firing at IDF troops from the hospital.

It turned out, however, the video clips of the firing been shot during “Operation Cast Lead” in 2009, not in 2014.

The IDF has continued to suggest that its destruction of public civilian facilities was forced on it by rocket launches from within those facilities. At the end of the “Operation Protective Edge” the IDF spokesman’s office claimed that 597 rockets had been launched from civilian facilities, of which 160 were allegedly fired from schools, 50 from hospitals, and 160 from mosques.

But those figures were by produced only by pretending that launching sites some distance from the facilities in question were on the premises of the facilities.

An IDF “declassified report” released Aug. 19, aimed at showing that civilian facilities were serving as military infrastructure for Hamas, includes no evidence of any rocket launches on the grounds of any civilian facility.

A very blurry 20-second video appears to show a rocket launch from what is identified as “Abu Nur” school. But it, too, is deceptive. A black streak rises from the area of the school for a little more than a second of the video, but for the entire length of the video two voices declare repeatedly that they saw three rockets launched “from within the school”.

Careful viewing of the footage reveals, however, that the apparent launch comes from outside the wall of the three-story school building rather than from within it.

In three other cases of alleged rocket launches from schools, the IDF provides no visual evidence – only large red dots drawn on an aerial view of the schools.

The Aug. 19 IDF report refers to a “rocket cache and gathering point for militants hidden in a mosque” in Nuseirat. But despite frequent repetitions of the notion that Hamas routinely stores rockets in mosques, the IDF has not produced photographic evidence of rocket storage in a single mosque.

Nor has the IDF made public any video evidence of secondary explosions from the destruction of mosques. In a tacit admission that such evidence is lacking, the report instead cites an instance of a “concealed entrance” to a Hamas tunnel located between a mosque and a school.

The most extensive destruction of civilian structures in “Operation Protective Edge” was the complete leveling of large parts of entire neighbourhoods in the Shujaiya district of Gaza City on Jul. 19. After the United Nations published a map showing the complete destruction of those areas of Shujaiya, the IDF published its own map on Aug. 4 aimed at justifying the destruction.

The map shows that the IDF can’t claim the proximity of Hamas rocket launching sites as the justification for the leveling of many residential blocks in Shujaiya. The Israeli military had identified every home in the devastated neighbourhoods on its map as a “hideout” for Hamas or Islamic Jihad fighters.

Although the red dots on the IDF map identifying rocket launch sites are too big to estimate accurately the distance between them and the closest houses, only a few such dots appear to be as close as one city block to a house in one of the areas of massive destruction. And all but a few of the homes destroyed are much farther than a block from the alleged launching sites.

An account of the Shujaiya destruction by journalist Mark Perry based on a Jul. 21 U.S. Defence Department report recalls that the IDF fired 7,000 artillery shells at residential areas in the district the night of Jul. 19, including 4,500 shells in the space of just seven hours.

Such massive and indiscriminate destruction of civilian structures is strictly prohibited by the international laws of war. Israeli officials have frequently said the purpose of IDF military operations in both Lebanon and Gaza was to “deter” their adversaries in the future by imposing heavy costs on the civilian population.