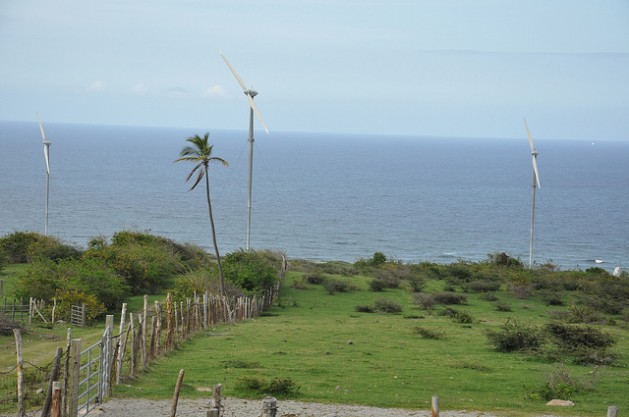 Turbines at WindWatt Nevis Limited. In most countries of the region, the abundance of renewable resources creates an opportunity to increase reliance on domestic energy sources rather than imported oil and gas. Credit: Desmond Brown/IPS

UNITED NATIONS, Sep 17 2014 (IPS) - World leaders gathered at the Climate Change Summit during the United Nations General Assembly on Sep. 23 will have a crucial opportunity to mobilise political will and advance solutions to climate change.

They will also need to address its closely connected challenges of increasing access to sustainable energy as a key tool to secure and advance gains in the social, economic and environmental realms.

Cities need to be at the heart of the solution. This is particularly important for Latin America and the Caribbean, which is the most urbanised developing region on the planet.

This is more important than ever for Latin America and the Caribbean. Even though the region is responsible for a relatively low share of global greenhouse gas (GHG) emissions, 12 percent, according to U.N. figures, it will be one of the most severely affected by temperature spikes, according a World Bank Report.

For the Caribbean region in particular, reliance on imported fuels challenges balance of payments stability and increases the vulnerability of key ecosystems that underpin important productive sectors, including tourism.

And the region faces new challenges. Demand for electricity is expected to double by 2030, as per capita income rises and countries become increasingly industrialised—and urban.

Although the region has a clean electricity matrix, with nearly 60 percent generated from hydroelectric resources, the share of fossil fuel-based generation has increased substantially in the past 10 years, mainly from natural gas.

Now is the time for governments and private sector to invest in sustainable energy alternatives—not only to encourage growth while reducing GHG emissions, but also to ensure access to clean energy to around 24 million people who still live in the dark.

Cities also need to be at the heart of the solution. This is particularly important for Latin America and the Caribbean, which is the most urbanised developing region on the planet.

Urbanisation rates have jumped from 68 percent in 1980 to 80 percent in 2012. By 2050, 90 percent of the population will be living in cities. This brings about a different set of energy challenges, in particular related to transport and public services.

Therefore, the question is whether the region will tap its vast potential of renewable resources to meet this demand or will turn towards increased fossil fuel generation.

In this context, energy policies that focus not only on the economic growth but also on the long-term social and environmental benefits will be essential to shape the region’s future.

Consequently, in addition to reduced CO2 emissions, the region should favour renewables. Why? Latin America and the Caribbean are a biodiversity superpower, according to a UNDP report.

On the one hand, this vast natural capital can be severely affected by climate change. Climate variability also destabilises agricultural systems and production that are key to supporting economic growth in the region.

But on the other hand, if properly managed, it could actually help adapt to climate change and increase resilience.

Also, in most countries, the abundance of renewable resources creates an opportunity to increase reliance on domestic energy sources rather than imported oil and gas, thereby decreasing vulnerability to foreign exchange shocks linked to prices changes in world markets.

In this context, countries have already been spearheading innovative policies. Several countries in the region produce biofuel in a sustainable way. For example, Brazil’s ethanol programme for automobiles is considered one of the most effective in the world.

It also entails liberating women and girls from time-consuming tasks, such as collecting fuel, pounding grain and hauling water, freeing time for education and paid work.

The U.N. Development Programme (UNDP) is working with countries in Latin America and the Caribbean to boost access to sustainable energy and reduce fossil fuel dependency.

In Nicaragua, for example, nearly 50,000 people from eight rural communities gained access to electricity following the inauguration of a new 300 kilowatt micro-hydropower plant in 2012.

This was a joint partnership between national and local governments, UNDP and the Swiss and Norwegian governments, which improved lives and transformed the energy sector.

In addition to spurring a new legislation to promote electricity generation based on renewable resources, micro enterprises have been emerging and jobs have been created—for both men and women.

Universal access to modern energy services is achievable by 2030—and Latin America and the Caribbean are already moving towards that direction. This will encourage development and transform lives.

In a Nicaraguan community that is no longer in the dark, Maribel Ubeda, a mother of three, said her children are the ones most benefitting from the recent access to energy: “Now they can use the internet and discover the world beyond our community.”