UNITED NATIONS, Aug 26 2014 (IPS) - Having lived and worked for more than a decade in four Caribbean countries, I have witnessed firsthand how Small Island Developing States (SIDS) are extremely vulnerable to challenges ranging from debt and unemployment to climate change and sea level rise.

Such aspects make their paths towards sustainable development probably more complex than non-SIDS countries. That was my experience, working closely with governments, civil society organisations and the people of Belize, Cuba, Guyana and Haiti – where I led the U.N. Development Programme’s (UNDP) reconstruction efforts after the devastating January 2010 earthquake.

In addition to saving lives, for every dollar spent in disaster preparedness and mitigation, seven dollars will be saved when a disaster strikes.

That’s why the upcoming UN Conference on Small Island Developing States (SIDS), taking place in Samoa, Sep. 1-4 is so important. It will provide an opportunity to increase international cooperation and knowledge sharing between and within regions. And it takes place at a key moment, ahead of the Climate Change Summit at the UN General Assembly, to be held on Sep. 23.

Climate change—and all natural hazards, in fact—hit Small Island Developing States hard, even though these countries haven’t historically contributed to the problem. Extreme exposure to disasters such as flooding, hurricanes, droughts, landslides and earthquakes place these countries at a particularly vulnerable position.

In the Caribbean, two key sectors, agriculture and tourism, which are crucial for these countries’ economies, are especially exposed. Agriculture provides 20 percent of total employment in the Caribbean. In some countries, like Haiti and Grenada, half of the total jobs depends on agriculture. Moreover, travel and tourism accounted for 14 percent of Caribbean countries’ Gross Domestic Product (GDP) in 2013 – the highest for any region in the world.

According to Jamaica’s Ministry of Water, Land, Environment and Climate Change, during the period 2000-2010 the country was impacted by 10 extreme weather events which have led the country to lose around two percent of its GDP per year. Moreover, sea levels have risen 0.9 mm per year, according to official figures. This causes Jamaicans, who live largely on the coast, not only to lose their beaches, but it also increases salinity in fresh waters and farming soil. 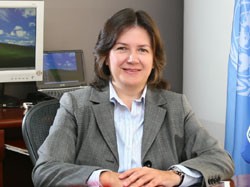 Also, when I visited Jamaica in July, the country was facing one of the worst droughts in its history. This had already led to a significant fall in agricultural production, higher food imports, increased food prices and a larger number of bush fires – which in turn destroy farms and forested areas.

Clearly, if countries do not reduce their vulnerabilities and strengthen their resilience – not only to natural disasters but also to financial crises – we won’t be able to guarantee, let alone expand, progress in the social, economic and environmental realms.

Preparedness is essential—and international cooperation plays a key role. UNDP is working closely with governments and societies in the Caribbean to integrate climate change considerations in planning and policy. This means investing in climate change adaptation and disaster risk reduction and preparedness, particularly in the most vulnerable communities and sectors.

In Guyana and Trinidad & Tobago, where I also met recently with key authorities, UNDP is working with the government to enhance climate change preparedness on three fronts: agriculture, natural disasters and promoting the use of renewable energy resources, which is critical to reduce the dependency on imported fossil fuels.

Knowledge-sharing between and within regions is also vital. UNDP has been working with governments in the Caribbean to share a successful practice that began in Cuba in 2005. The initiative, the Risk Reduction Management Centres, supports local governments’ pivotal role in the civil defence system.

In addition, experts from different agencies collaborate to map disaster-prone areas, analyse risk and help decision-making at the municipal level. Importantly, each Centre is also linked up with vulnerable communities through early warning teams, which serve as the Centre’s “tentacles”, to increase awareness and safeguard people and economic resources.

This model has been adapted and is being rolled out in the British Virgin Islands, Dominican Republic, Guyana, Jamaica and Trinidad and Tobago.

In Jamaica, for example, in hazard-prone St Catherine’s Parish on the outskirts of Kingston, a team has been implementing the country’s first such Centre, mapping vulnerable areas and training community leaders to play a central role in the disaster preparation and risk reduction system.

In Old Harbor Bay, a fishing community of 7,000 inhabitants, UNDP, together with the government of Jamaica, has provided emergency equipment and training for better preparation and evacuation when hurricanes or other disasters strike.

Boosting preparedness and increasing resilience is an investment. In addition to saving lives, for every dollar spent in disaster preparedness and mitigation, seven dollars will be saved when a disaster strikes.

However, it is also crucial to address vulnerability matters beyond climate change or natural disasters. Small Island Developing States—in the Caribbean and other regions— are often isolated from world trade and global finance. The international community needs to recognise and support this vulnerable group of countries, as they pave the way to more sustainable development.