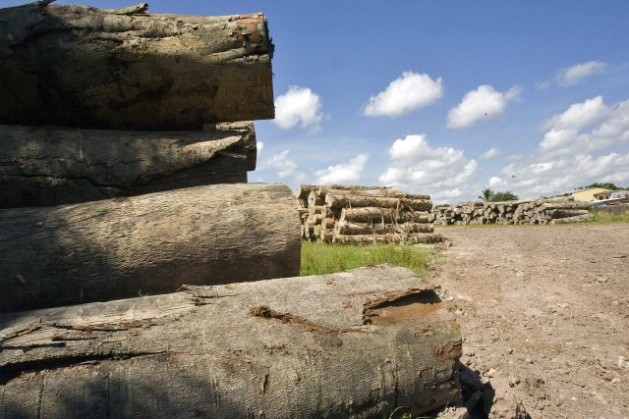 Over the past decade, a majority of the illegal clearing of forests has been in response to foreign demand for common commodities such as paper, beef, soy and palm oil. Yet governments in major markets such as the United States and European Union are taking almost no steps to urge corporations or consumers to reject such products.

“The biggest threat to forests is gradually changing, and that threat is today from commercial agriculture." -- Sam Lawson of Earthsight

Indeed, doing so would be incredibly difficult given the incredibly widespread availability of potentially “dirty” products, the new analysis, published by Forest Trends, a Washington-based watchdog group, suggests. In many countries, consumers are likely using such products on a regular basis.

“In the average supermarket today, the majority of products are at risk of containing commodities that come from illegally deforested lands,” Sam Lawson, the report’s author and director of Earthsight, a British group that investigates environmental crime, told IPS.

“That’s true for any product encased in paper or cardboard, any beef, and any chicken or pork given that these [latter] animals are often raised on soy. And, of course, palm oil is now in almost everything, from lipstick to ice cream.”

In the absence of legislation to prevent such products from being imported and sold, Lawson says, “There’s always this risk.”

Overall, some 40 percent of all globally traded palm oil and 14 percent of all beef likely comes from illegally cleared lands, the paper estimates. The same can be said of a fifth of all soy and a third of all tropical timber, widely used to make paper products.

Meanwhile, some three-quarters of Brazilian soy and Indonesian palm oil are exported. Such trends are growing in countries such as Papua New Guinea and the Democratic Republic of Congo.

While many case studies on these issues have previously been published on particular countries, sectors or companies, the new report is the first to try to extrapolate that data to the global level.

“Consumer demand in overseas markets resulted in the illegal clearance of more than 200,000 square kilometers of tropical forest during the first 12 years of the new millennium,” the report estimates, noting this adds up to “an average of five football fields every minute”.

While much this illegal clearing is being facilitated by corruption and lack of capacity in developing countries, Lawson places the culpability elsewhere.

“It’s companies that are carrying out these acts and they bear ultimate responsibility,” he says. “Big consumer countries also need to stop undermining the efforts of developing countries by allowing these products unfettered access to their markets.

The ramifications of degraded forestlands, of course, are both local – impacting on livelihoods, ecosystems and human health – and global. Standing, mature forests not only hold massive amounts of carbon but also continually suck carbon dioxide out of the atmosphere.

Between 2000 and 2012, the emissions associated with illegal deforestation for commercial agriculture each year was roughly the same as a quarter of the annual fossil fuel emissions in the European Union.

The new findings come just ahead of two major global climate summits. Later this month, U.N. Secretary-General Ban Ki-moon will host international leaders in New York to discuss the issue, and in December the next round of global climate negotiations will take place in Peru, ahead of intended global agreement next year.

The Lima talks are being referred to as the “forest” round. Some observers have suggested that forestry could offer the most significant potential for global emissions cuts.

This rising global consensus around the importance of maintaining forest cover in the face of global climate change has led to significant international efforts to tackle illegal logging. And these have met with some important success.

Yet Earthsight’s Lawson says that some of the companies that were previously involved in illegally cutting tropical hardwoods are now engaging in the illegal clearing of forests to make way for large-scale agriculture.

“The biggest threat to forests is gradually changing, and that threat is today from commercial agriculture,” he says. “What we need now is to repeat some of the efforts that have been made in relation to illegal logging and apply those to agricultural commodities.”

The European Union, for instance, is currently in the process of implementing a bilateral system of licensing, in order to allow for legally harvested timber to be traced back to its source. Similar bilateral arrangements, Lawson suggests, could be introduced around key commodities.

Such a process would charge governments and multinational companies with ensuring that globally traded commodities do not originate from illegally cleared forestlands. In essence, this would create a situation in which the base requirement for entry into major markets would be proven legality.

Today, of course, the choice of whether or not to purchase a product made with ingredients potentially sourced from illegally deforested lands is up to the consumer – if that information is available at all. Yet such a new arrangement would turn that responsibility around entirely.

“All of this onus on the consumer bothers me – it really shouldn’t have to be so difficult to make these choices,” Danielle Nierenberg, the president of Food Tank, a Washington think tank focused on sustainability issues, told IPS.

“The fact is, consumers are still blind to these issues – despite the growth of the local food movement in Western countries, there remains significant demand for a range of inexpensive products. That’s why the real action has to come from the corporate side, and governments need to take a bigger interest.”

The United States has landmark legislation in place that bans the use of illegally sourced wood products in the country. By many accounts, that legal regime has been notably effective in cutting off the country’s massive market to those products.

Yet for now, Nierenberg says that there is no political appetite in Washington to do something similar regarding agricultural commodities.

“Instead, the real opportunity for government initiative comes from the developing world,” she says. “They need to invest more in small- and medium-scale farmers, protect their lands from land grabs, and invest in simple agricultural technologies that actually work. That’s where the real change could happen.”