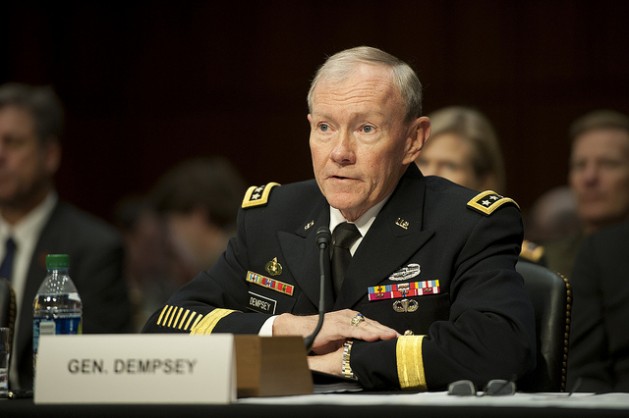 The statement by the chairman of the Joint Chiefs of Staff, Gen. Martin Dempsey, delivered during testimony before a key Congressional committee, suggested for the first time that the administration may substantially broaden military operations in Iraq beyond air strikes and advising Iraqi and Kurdish forces far from the front lines.

As long as Saudi Arabia and Iran do not make common cause, any coalition to combat Islamist fanatics will be half-hearted at best and unrooted in the region at worst." -- Amb. Chas Freeman (ret.)

“If we reach the point where I believe our advisers should accompany Iraqi troops on attacks against specific targets, I will recommend that to the president,” Dempsey told members of the Senate Armed Services Committee.

“At this point, his [Obama’s] stated policy is we will not have U.S. ground forces in direct combat,” he said. “But he has told me as well to come back to him on a case-by-case basis.”

Dempsey’s remarks, which came as Congress appeared poised to approve a pending 500-million-dollar request to train and equip Syrian rebels committed to fighting ISIS, as well as the government of President Bashar al-Assad, appeared certain to fuel doubts about Obama’s plans, particularly given his promise last week that U.S. forces “will not have a combat mission.”

“We will not get dragged into another ground war in Iraq,” he declared in last week’s nationally televised speech in which he also pledged to build an international coalition, including NATO and key regional and Sunni-led Arab states, to fight ISIS forces in both Iraq and Syria.

While Secretary of State John Kerry has since gathered public endorsements for the administration’s strategy to “degrade and ultimately destroy” ISIS, notably at a meeting of Arab states in Jeddah, Saudi Arabia, last week and from a larger group of nations in Paris Sunday, scepticism over the strength and effectiveness of such a coalition appears to have deepened.

Although Saudi Arabia, the United Arab Emirates (UAE) and France appear committed to provide some air support to anti-ISIS operations, several key allies, including Britain, have remained non-committal about their willingness to help with military operations.

Turkey, whose army is the largest and most potent in the region and whose porous borders with ISIS-controlled regions in eastern Syria have been fully exploited by the group, has been particularly disappointing to officials here.

Despite repeated appeals, for example, Ankara has reportedly refused to permit U.S. military aircraft to use its strategically located Incirlik air base for carrying out anything but humanitarian missions in or over Iraq, insisting that any direct involvement in the campaign against ISIS would jeopardise the lives of dozens of Turkish diplomats seized by the group at Ankara’s consulate in Aleppo earlier this year.

Critics of Washington’s strategy are also concerned that Kerry may have reduced the chances for co-operation with another potentially key anti-ISIS ally – Iran – which he explicitly excluded from participation in any international coalition due to its support for Assad and its alleged status as a “state sponsor of terror”.

While Kerry Monday said Washington remained open to “communicating” with Tehran — which, along among the regional powers, has provided arms and advisers to both Kurdish and Iraqi forces — about its efforts against ISIS, Iran’s Supreme Leader, Ayatollah Ali Khamenei, who earlier this month reportedly authorised limited co-operation over ISIS, ridiculed the notion, insisting that it was Iran who had rebuffed Washington.

But Kerry’s exclusion of Iran from the anti-ISIS coalition, according to experts here, was motivated primarily by threats by Saudi Arabia and the UAE to drop out if Tehran were included – a reflection not only of the ongoing Sunni-Shi’a conflict in the region, especially in the Syrian civil war, but also of the difficulty Washington faces in persuading governments with widely differing interests to unite behind a common cause.

“Leaving Iran out of the collective effort to contain and eventually destroy ISIS, especially after what happened in Amerli [a town whose siege by ISIS was eventually broken by a combination of U.S. airpower and Iranian-backed militias and Iraqi troops], defies logic and sanity and cannot be explained away by anyone in Iran,” noted Farideh Farhi, an Iran specialist at the University of Hawaii.

“It suggests to many [in Iran] that the fear of legitimising Iran’s role in regional security continues to be a driving force in U.S. foreign policy,” she told IPS in an email exchange.

Indeed, the success of Obama’s strategy may well depend less on U.S. military power than on his ability to reconcile and reassure key regional actors, including Iran.

“To have any hope of success, America’s do-it-yourself approach needs to be replaced with an effort to facilitate co-operation between the region’s great Muslim powers,” according to Amb. Chas Freeman (ret.), who served as Washington’s chief envoy to Riyadh during the first Gulf War.

“… As long as Saudi Arabia and Iran do not make common cause, any coalition to combat Islamist fanatics will be half-hearted at best and unrooted in the region at worst,” he told IPS.

Despite these difficult diplomatic challenges faced by Obama, most of the scepticism here revolves around his military strategy, particularly its reliance on air power and the absence of effective ground forces that can take and hold territory, especially in predominantly Sunni areas of both western and north-central Iraq and eastern Syria.

While U.S. officials believe that Kurdish peshmerga forces and the Iraqi army – with Iranian-backed Shi’a militias – can, with U.S. and allied air support, roll back most of ISIS’s more-recent gains in Iraq, it will take far more time to wrest control of areas, including cities like Fallujah and Ramadi, which the group has effectively governed for months.

Obama announced last week that he was sending nearly 500 more military personnel to Iraq, bringing the total U.S. presence there to around 1,600 troops, most of whom are to serve as trainers and advisers both for the peshmerga and the Iraqi army.

According to Dempsey, however, these troops have not yet been authorised to accompany local forces into combat or even to act as spotters for U.S. aircraft.

As for Syria, Washington plans to train and equip some 5,000 members of the Free Syrian Army (FSA), a fractious coalition of “moderate” fighters who have been increasingly squeezed and marginalised by both pro-government forces and ISIS and who have often allied themselves with other Islamist groups, including Jabhat al-Nusra, an Al Qaeda affiliate.

It will take at least eight months, however, before that force can take the field, according to Dempsey and Pentagon chief Chuck Hagel. Even then, they said, such a force will be unable “to turn the tide” of battle. Dempsey’s said he hoped that Sunni-led Arab countries would provide special operations forces to support the FSA, although none has yet indicated a willingness to do so.

Hawks, such as Republican Sens. John McCain and Lindsey Graham, have argued that these plans are insufficient to destroy ISIS in either country.

Some neo-conservative defence analysts, such as Max Boot of the Council on Foreign Relations and Frederick Kagan of the American Enterprise Institute, have called for as many as 25,000 U.S. ground troops, including thousands of Special Forces units to work with “moderate” Sunni forces, to be deployed to both countries in order to prevail. They have also warned against any co-operation with either Iran or Assad in the fight against ISIS.