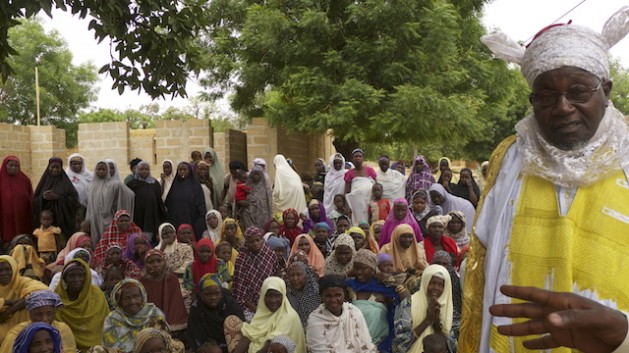 Chief Yahya Louche of Bande, a village in Niger, addresses his constituents about maternal health and the importance of involving men. Credit: Joan Erakit/IPS

BANDE, Niger, Sep 11 2014 (IPS) - It is a long, 14-hour drive from Niger’s capital city Niamey to the village of Bande. And the ride is a dreary one as the roadside is bare. The occasional, lone goat herder is spotted every few kilometres and the sightings become a cause of both confusion and excitement since there aren’t any trees, or watering holes in sight.

Dry, hot and often plagued with sandstorms, Niger has a population of over 17.2 million, 80 percent of which live in rural areas. Insecurity, drought and trans-border issues contribute to this West African nation’s fragility where 50 percent of its citizens have access to health services.

IPS has travelled here with the United Nations Population Fund (UNFPA) to visit a school that — on a continent where male involvement in maternal health is not the norm and, in fact, men are oftentimes not present during the duration of the pregnancy or the birthing process due to cultural reasons — is pretty unique. It’s the School of Husbands.

Formed with support from UNFPA in 2011, the school has over 137 locations in Niger’s southern region of Zinder. Members are married men between the ages of 25 and 50, but young boys are now being recruited to come and sit in on meetings — to learn from their elders.

As IPS arrives at the village early one morning, a group of musicians approach the vehicle playing ceremonial music; they precede a traditional chief who is being escorted by his most trusted counsel and a throng of personal security who frantically chase away curious children with sticks.

Yahya Louche is the chief of Bande and he stops to talk to IPS about maternal health and the importance of involving men.

“I am a member of the School of Husbands,” Louche says of the informal institution that brings together married men to discuss the gains of reproductive health, family planning and empowerment.

“The School of Husbands is where there is no teacher and there is not student,” Louche continues, adding, “They are not getting paid, they are working for the well being of the population.”

The School of Husbands is a prime example of what can happen when men stand shoulder to shoulder with women, promoting safe births.

The Perils of No Care

While visiting the health centre near the chief’s homestead, IPS spots a young woman making her way across the compound to the maternity room. She is weak and can barely make eye contact while two friends hold her up by each arm.

IPS is told that she delivered a baby at home and has walked kilometres to get help because she began bleeding profusely – it is an obstetrical emergency known as postpartum haemorrhage (PPH).

According to the World Health Organisation (WHO), PPH is responsible for about 25 percent of maternal mortality. Without prenatal or antenatal visits during pregnancy, complications are more likely to arise — some often leading to death.

“Before the School of Husbands, women didn’t want to go for delivery at health centres, they would stay at home and have their babies,” Louche explains.

It is a very well-known custom in the country that women are not to show their pain or discomfort. When they give birth, it is often in silence.  The woman on the delivery table makes no sound though pain is very visible on her face.

Madame Doudou Aissatoo, a midwife in Konni, a town in Niger, tells IPS that it is important to have reproductive health and family planning services readily available because many women walk for miles to come to the health centres. If commodities and services, or even midwives are unavailable, the women will leave and not return for a very long time.

The ancient story is quite fascinating; when a young boy leaves his homestead to find greener pastures, a time will mostly likely come when the folks back home call upon the man to become chief.

Often leaving the diaspora to fulfil his duties, a request to become chief is one that cannot be refused for turning it down is the equivalent to shaming ones ancestors.

It is such that the chiefs in Niger today come from different professional backgrounds and many have been doctors, diplomats and professors.

Traditional chiefs in Niger are the most important leaders — even heads of state and presidents seek their council before making big decisions. Without their blessing, one can assume that the road ahead will be difficult.

The UNFPA country office has understood the role that traditional chiefs play and has built a partnership in favour of promoting the health and rights of women.

In 2012, the traditional chiefs of Niger signed an agreement with UNFPA furthering a commitment to improve the health conditions of women.

“When we gathered in 2012, we made a commitment as an organisation to work with UNFPA in order to reduce the demographic growth, be part of sensitisation activities and gear towards improving reproductive health,” Louche explains.

When asked if she feels good about her husband participating in the institution, Fassouma Manzo, a local woman replies ecstatically: “Very much!”

A round of applause follows Manzo’s declaration as she continues, “before the School of Husbands, men didn’t have discussions with their women; but now, there is an issue for which they are very interested. As a woman, you can now find a space where you can talk and share with your man.  It’s a great side effect!”

Louche, a charismatic chief who spends much time talking to his constituents truly believes that empowering men puts the focus put on women.

The School of Husbands doesn’t just highlight the importance of seeking professional medical care when pregnant, but it also works to promote understanding between men and women — a gain that will only foster harmony for both sexes.