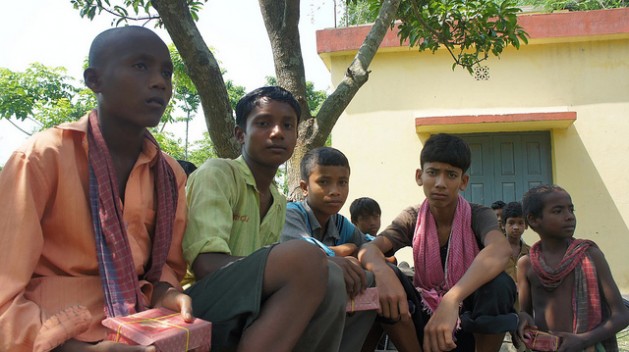 Children such as these are used as smugglers across the India-Bangladesh border. Credit: Sujoy Dhar/IPS

WASHINGTON, Oct 8 2014 (IPS) - Most of the world’s governments are taking measures to reduce the worst and most hazardous forms of child labour, according to a major report released here Tuesday by the U.S. Labour Department.

In its annual assessment of progress toward eliminating that kind of exploitation, the 958-page report found that roughly half of the 140-some countries and foreign territories covered by the report had made what it called “moderate” advances in the field.

“I’m talking about children who carry huge loads on their backs and wield machetes on farms…who scavenge in garbage dumps and crawl in underground mine shafts." -- U.S. Labour Secretary Thomas Perez

Thirteen countries – most of them in Latin America — were found to have made “significant” progress in eliminating the worst forms of child labour during 2013 compared to the year before.

But another 13 nations and territories, notably the Democratic Republic of Congo, Eritrea, Uzbekistan, and Venezuela, were found to have made none at all.

“This report shines a light on children around the globe who are being robbed of their futures, who spend their days and often their nights engaged in some of the most gruelling work imaginable,” said U.S. Labour Secretary Thomas Perez, at the release of the ‘2013 Findings on the Worst Forms of Child Labor’.

“I’m talking about children who carry huge loads on their backs and wield machetes on farms…who scavenge in garbage dumps and crawl in underground mine shafts searching for precious minerals from which someone else will profit,” he said. “Children with munitions strapped to their bodies, pressed into service as combatants in armed conflicts; children who are victims of trafficking or commercial sexual exploitation.”

The report, which consists mainly of specific profiles of the child labour situation and what national governments are doing about it in specific countries and territories that benefit under the U.S. Generalised System of Preferences (GSP) or other trade-boosting programmes, such as the Andean Trade Preference Act or the African Growth and Opportunities Act, has been mandated by Congress since 2002. The report also recommends steps governments can take to improve the situation.

It gains widespread praise from labour and child-welfare activist groups that use it as a way to raise public consciousness and as a source of pressure on foreign governments to do more to eliminate it.

While the Labour Department itself cannot take punitive action against unresponsive governments, the report can influence actions by other U.S. agencies, such as the Office of the U.S. Trade Representative that can, for example, reduce or eliminate trade benefits in cases of serious violations of international labour conventions.

“Overall, this report has been a fantastic tool for the advocacy community,” said Reid Maki of the Child Labor Coalition (CLC), which includes more than two dozen labour, church, consumer, and human rights groups. “It gives us something to measure progress each year and allows countries to compare their performance with others.”

“I think the report is a tremendous achievement,” Brian Campbell of the Washington-based International Labor Rights Forum (ILRF) told IPS. He praised, in particular, its treatment of Uzbekistan, whose government has long been criticised for forcing school students to take part in the cotton harvest.

“They demonstrated a lot of courage …by making very clear that not only have children been taken out of school, but also that the whole system is based on forced labour by the government,” he said. “The challenge will be for the other U.S. government agencies to take on this analysis – including the Customs Service which is required to ban imports produced by forced labour.”

The International Labour Organisation (ILO) defines the “worst forms of child labour” as all forms of slavery, such as debt bondage, child trafficking, and forced recruitment of children in armed conflicts; the use of children for prostitution or pornography; their use of illicit activities, such as the production or trafficking of drugs; and “hazardous work” which, in turn is defined as any that “jeopardises the physical, mental or moral well-being” of a child.

According to ILO statistics, the number of children engaged in the worst forms of child labour or whose age is below the minimum prescribed by national law has fallen from about 246 million in 2000 to 168 million in 2012. The latter figure still accounts for roughly one in every 10 children from five to 18 years old worldwide.

The number of children engaged in “hazardous work” halved – from 170 million to 85 million – over the same period, according to the ILO.

The report divided countries into those where advances in eliminating the worst forms of child labour were “significant”, “moderate”, “minimal”, and none. Progress was assessed according to a number of criteria, including the enactment of laws, efforts at enforcement and co-ordination, the adoption of specific policies, and the implementation of social programmes designed to eliminate the problem, and encourage children to remain in school.

The CLC’s Maki, who also serves as the director of child labour advocacy at the National Consumers League, called the list “very encouraging.” “Most of these countries have had a lot of child labour problems in the past,” he told IPS.

He noted that “steady progress” had been made over the last several years, in particular. Since 2011, he said, the number of countries that had made “significant” progress had grown from two to 13, while the number with “moderate” advances had likewise increased from 47 to 72.

Conversely, the number of countries and territories with “minimal” or “no” progress has fallen from 82 to 50 – 20 of which were small islands, such as Anguilla, Barbados, Tonga, Tuvalu, and the Falkland/Malvinas Islands with small populations, Maki pointed out.

One weakness of the report, according to ILRF’s Campbell was its failure to address how the private sector – including powerful multinational corporations — contributes to the worst forms of child labour.

“In the Malawi section, for example, the reports focuses at length what the government has done, but it doesn’t address the contract system of production of tobacco, as implemented by U.S. tobacco companies and their subsidiaries, which is a root cause of the child labour problem there,” he said.

“It’s largely because the Labour Department views its Congressional mandate as very limited; i.e., only what the governments are doing,” he said. “I think they could interpret the scope of the report to include other issues, such as the business practices of companies and how they also contribute to the problem.”

But Maki was more reserved. “If you expand the scope of the report to the business world,” he said, “you might muddy things enough to let the governments off the hook.”