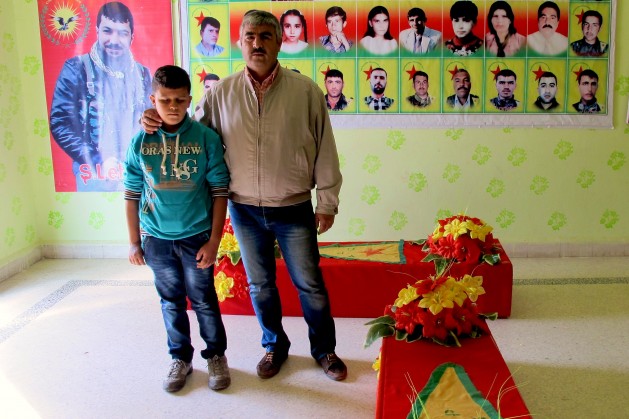 Ali Khalil and his son, Diar, pose by the coffins they have just arranged for burial. Credit: Karlos Zurutuza/IPS

SEREKANIYE, Syria, Nov 3 2014 (IPS) - The walls of the Association for the Martyrs of Serekaniye are covered with the portraits of those fallen in combat in this northern Syrian town. Ali Khalil has buried everyone and each of them with the help of Diar, his 13-year-old son.

Inside this building west of Serekaniye, 680 kilometres northeast of Damascus, Khalil invites IPS to hear some of the stories behind the myriad of pictures. The first one is that of his brother, Abid.

“He dreamed of being a journalist but he was hit by a sniper in November 2012. He was the first one I buried, and I have done the same with the rest ever since,” recalls this former merchant in his late thirties, before resuming his account.

“These three arrived completely charred; this one was beheaded, the same as those two further up” … Khalil points with his finger at just half a dozen among more than a hundred portraits staring at infinity.

“5.5 million children have been directly affected by the war [in Syria], one in ten has become a refugee in a neighbouring country and around 8,000 of the latter crossed the border without their parents” – UNICEF

It was precisely the death of his brother which led him to set up this committee to support the families of the deceased. He is one of the ten members in charge.

“Other than arranging the burial, we assist families with money, food or blankets for the winter,” explains Khalil. The aid, he adds, comes from the Kurdish provisional government in northern Syria

After the uprising of 2011 against the Syrian government, the country’s Kurds opted for a neutrality that has forced them into clashes with both government and opposition forces.

In July 2012 they took over the areas where they form a majority, in Syria’s north. Today they rule over three enclaves in the north: Afrin, Jazeera and Kobani, the latter being known worldwide for the brutal and still on-going six-week siege at the hands of the Islamic State.

Redur Xelil, spokesman for the YPG (Kurdish acronym for People’s Protection Units), the militia defending the territory, told IPS that after Kobani, the battle in Serekaniye has been the bloodiest front for the Kurds in Syria. 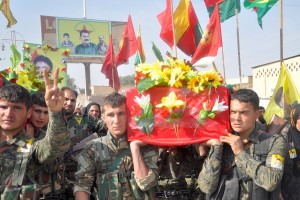 A burial in Serekaniye for fighters fallen in combat against ISIS. Credit: Qadir Agid

Mahmud Rashid, 37, also volunteers at the martyrs´ house. He has two sisters and nine brothers, “all of them fighting, including a 60-year-old one.” He adds, however, that one of them, Brahim, fell into the hands of the Islamic State five months ago, and that they have had no news from him ever since.

“His wife showed up four days ago to get help. We handed her clothes for her seven children, blankets and 10,000 Syrian pounds [about 48 euros],” Rashid told IPS.

“I will be a soldier”

The conversation is interrupted by the arrival of the truck carrying the last two coffins commissioned by the association. After they are taken into the room, Khalil and his son start to wrap them in the regular red cloth, to which they will add the yellow banner of the YPG and a crown of plastic flowers.

They proceed with the precision conferred by a two-year routine so it barely takes them more than ten minutes. Shrouding the bodies, Khalil explains, is “much more laborious.” But he´s not alone.

“Diar helps me with everything and does whatever is needed. We are hand in glove,” the volunteer explains proudly, posing his hand over his son’s shoulders. Khalil has another son, Rojdar, who is 11 but cannot join them because he suffers from chronic hepatitis and never leaves the house.

In a report on the impact of three years of war on the health of Syria’s children released this year, Save the Children warns of the serious deterioration of sanitary conditions in the country. According to Save the Children, 60 percent of hospitals in the country have been destroyed and the production of drugs has decreased by 70 percent.

To these figures has to be added the fact that half of the doctors in the country have left. Of the 2,500 that a city like Aleppo needs, only 36 remain, says Save the Children. With representation in 120 countries, it is calling for “urgent action” so that children receive basic vaccination.

Meanwhile, it is far from easy to get a word from Diar. “Why don´t you want to talk now,” Khalil asks his son. “Tell him how much you loved your uncle; tell him you would spend the day together at the Internet café.”

Diar admits he has not much to do other than helping his father. “A majority of the children have left the city and the few remaining don´t dare to leave home because of the fighting,” explains the boy, without looking up from the ground.

For those who left, reality is far from bearable either. As noted by UNICEF in its 2014 report titled Under Siege: The devastating impact on children of three years of conflict in Syria, 5.5 million children have been directly affected by the war, one in ten has become a refugee in a neighbouring country and around 8,000 of the latter crossed the border without their parents.

Other than the most visible effects, the psychological sequels are equally devastating: “Many Syrian children are in pure survival mode”, says UNICEF child protection specialist Jane MacPhail, who spends her days working with child refugees in Jordan. “They have seen the most terrible things and forget normal social and emotional responses.”

“Tell the journalist what you used to say during the days when the shelling lasted day and night: ‘You can throw as many bombs as you want but we will never leave’,” Khalil insists with his son, while the boy concentrates on carefully centring the crown of flowers on the second coffin.

Diar stands up only to say that he will join the ranks of the YPG as soon as he is 18. The war in Syria may be over after five years but that does not seem to matter to him.

“I will be a soldier,” Diar repeats, with his eyes still fixed on the ground. Until then, he says, he will help his father.