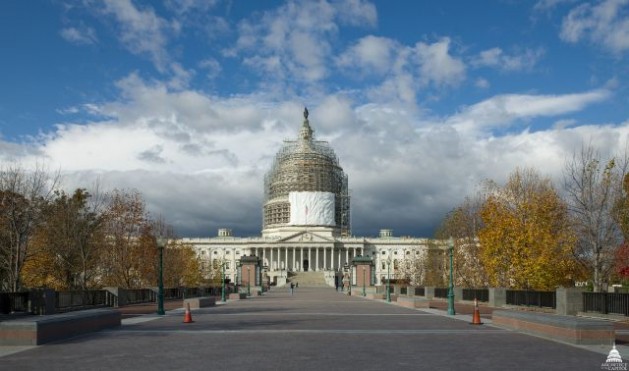 The U.S. Capitol Building undergoes a restoration project to repair more than 1,000 cracks that have appeared in the dome. Credit: Architect of the Capitol/cc by 2.0

NEW YORK, Nov 12 2014 (IPS) - Less than 15 percent of U.S. citizens approve of the job that Congress is doing, a 40-year low, and few expect last week’s congressional elections to herald a new era of political cooperation.

However, the polarised, gridlocked Congress reflects the increasing divisions in U.S. society itself.

“The share of Americans who are consistently liberal or consistently conservative is much greater today than it has been in the past,” said Jocelyn Kiley, associate director of research at the Pew Research Center, a nonpartisan think tank that conducts public opinion polling.

“About 20 percent of the public is across-the-board either liberal or conservative, and that’s about double what it was 20 years ago,” she told IPS.

This means that if a person holds a liberal viewpoint on one particular issue, it is safer to assume that he or she also holds a liberal standpoint on other issues as well. Likewise with conservatives.

It’s important to note that U.S. citizens’ political views are not becoming more extreme; they are simply lining up in two consistent camps more so than in the past, a phenomenon that has been called sorting.

In the past, each party had some appeal to the other side. In the mid-1900s, liberal Republicans existed in the Northeast, and conservative Democrats existed in the South. No longer.  Today, there is little to no overlap between the parties.

Because of sorting, hostility between liberals and conservatives has risen.

When consistent partisans cannot think of a single issue on which they agree with the other side, they find it much harder to relate.

Pew Research found that, “In each party, the share with a highly negative view of the opposing party has more than doubled since 1994. Most of these intense partisans believe the opposing party’s policies ‘are so misguided that they threaten the nation’s well-being.’”

Partisan animosity has even expanded to aspects of life usually seen as apolitical.

When it comes to the news media, liberals and conservatives live in different worlds. Another study, Political Polarization and Media Habits, found that liberals tend to trust a variety of news sources, while conservatives distrust most news sources and orient around one single media outlet.

On social media too, partisans find themselves in ideological echo chambers.

Despite concerns over polarisation, U.S. politics does still contain a moderate centre.

As Kiley puts it, “There are still many, many Americas who are not ideological down-the-line liberals or down-the-line conservatives.”

So where are these centrists? Not participating in politics, usually.

Kiley explains what is known as the political activism gap: the more consistent a person’s political views, the more likely he or she is to be politically engaged.

The political activism gap applies beyond just voting too. Consistent partisans donate to campaigns, volunteer for political causes, and write letters to public officials at a higher rate than their more moderate peers.

As a result, government policymakers miss out on the voices in the centre.

Combine ideological sorting, increased partisan animosity, media isolation and the political activism gap, and you have a recipe for government gridlock.

Congress has not been this polarised since the late 1800s, during reconstruction after the U.S. Civil War.

“Sorting makes it more difficult to form cross-party coalitions,” Morris Fiorina, a Stanford political scientist, told IPS via email. “Each party has a very distinct base, so members have no electoral reason to reach across party lines and may well incur a penalty.”

In next year’s new session of Congress, many commentators do not believe there will be much progress.

“Whether gridlock will continue depends on how a Republican congressional majority chooses to behave,” Fiorina said. “If they believe that winning the presidency in 2016 requires that they demonstrate a capacity to govern responsibly, there is some possibility for cutting deals with Obama.  But they may not be able to control their hard-right wings.”

Even if Congress does somehow find a way to pass any significant legislation in the new session, it can expect to encounter a deeply divided public reaction.