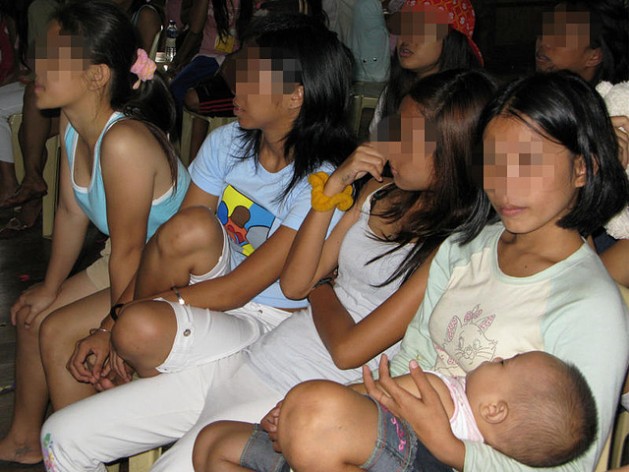 “The government has not intervened in protecting children from early marriage and in ending the decades-long war between Muslims and Christians to achieve true and lasting peace." -- Mark Timbang

The most notable case of this last scourge was early this year in the island of Cebu, 570 kilometres south of Manila, where the Philippine National Police arrested and tried foreign nationals for pedophilia and child pornography in a large-scale cybersex business.

While the Philippines is praised by international human rights groups as having an advanced legal framework for children, child rights advocates like Baez said “violations continue to persist,” including widespread corporal punishment at home, in schools and in other settings.

The Bata Muna (Child First), a nationwide movement that monitors the implementation of children’s rights in the Philippines consisting of 23 children’s organisations jointly convened by Save the Children, Zone One Tondo Organization consisting of urban poor communities, and Children Talk to Children (C2C), said these violations were contained in the United Nations reviews and expert recommendations to the Philippine government.

The movement listed the gains on the realisation of children’s rights with the existence of the Juvenile Justice Welfare Act, Anti-Child Trafficking, Anti-Pornography Act and Foster Care Act, among other policies protecting children.

There is also the Pantawid Pamilyang Pilipino Program (4Ps), a social welfare programme intended to eradicate extreme poverty by investing in children’s education and health; the National Strategic Framework for the Development of Children 2001-2025; the Philippine Plan of Action for Children; and the growing collective efforts of civil society to claim children’s rights.

But Baez said these laws have not been fully implemented, and are in fact clouded by current legislative proposals such as amending the country’s Revised Penal Code to raise the age of statutory rape from the current 12 to 16 to align the country’s laws to internationally-accepted standard of age of consent.

The recently-enacted Responsible Parenthood and Reproductive Health Law, which endured 15 years of being filed, re-filed and debated on in the Philippine Congress, has yet to be implemented. Many civil society groups have pinned their hopes on this law on the education of young people on sexual responsibility and life skills.

Teenage pregnancy, which affects 1.4 million Filipino girls aged 15 to 19, is widespread in the country, according to the University of the Philippines Population Institute that conducted the Young Adult Fertility and Sexuality Survey in 2013.

There are 43 million young Filipinos under 18, according to 2014 estimates of the National Statistics Office, and these youth, especially those in the poorest households and with limited education, need to be informed about their bodies, their health and their rights to prevent early pregnancies.

The child advocates said early pregnancies deny young girls their basic human rights and prevent them from continuing their schooling. The advocates said if the Reproductive Health Law is implemented immediately, many girls and boys will be able to receive correct information on how to protect and care for their bodies.

On education, Baez said the government’s intention to provide more access has yet to be realised with the introduction in 2011 of the K to 12 program to provide a child ample time to be skilled, develop lifelong learning, and prepare them for tertiary education, middle-level skills development, employment, and entrepreneurship.

“While the programme does not solve the high drop-out rate in primary education, children in remote and poor areas still walk kilometres just to go to school,” Baez said.

This situation was echoed by Mark Timbang, advocacy coordinator of the Mindanao Action Group for Children’s Rights and Protection in the country’s predominantly Muslim south, who said the government has not shown its intentions to provide children a more convenient way of going to school.

Timbang also said “the government has not intervened in protecting children from early marriage and in ending the decades-long war between Muslims and Christians to achieve true and lasting peace” where children can grow safely.

Sheila Carreon, child participation officer of Save the Children, added that another pending bill seeks to raise the age of children who can participate in the Sangguniang Kabataan (Youth Council), a youth political body that is a mechanism for children’s participation in governance, from the current 15-17 years to 18-24.

“We urged the government not to erase children in the council. Let the children experience the issues that concern them. The council is their only platform,” said Carreon.

Angelica Ramirez, advocacy officer of the Philippine Legislators Committee on Population and Development, said existing laws do not give enough protection to children, citing as an example pending legislative measures that seek positive discipline instead of using corporal punishment on children.

Foremost among them is the Positive Discipline and Anti Corporal Punishment bill that promotes the positive discipline approach that seeks to teach children that violence is not an acceptable and appropriate strategy in resolving conflict.

It promotes non-violent parenting that guides children’s behaviour while respecting their rights to healthy development and participation in learning, develops their positive communication and attention skills, and provides them with opportunities to evaluate the choices they make.

Specifically, the bill suggests immediately correcting a child’s wrongdoing, teaching the child a lesson, giving tools that build self -discipline and emotional control, and building a good relationship with the child by understanding his or her needs and capabilities at each stage of development without the use of violence and by preventing embarrassment and indignity on a child.

Citing a campaign-related slogan that quotes children saying, “You don’t need to hurt us to let us learn,” Ramirez said corporal punishment is “rampant and prevalent,” as it is considered in many Filipino households as a cultural norm.

She cited a 2011 Pulse Asia survey that said eight out of 10 Filipino children experience corporal punishment and two out of three parents know no other means of disciplining their children.

Addressing this issue by stopping the practice can have a good ripple effect on future generations, said Ramirez, because nine out of 10 parents who practice corporal punishment said it was also used by their parents to discipline them.

*The story that moved on Dec. 15 misstated the matter of statutory rape in the Philippines. Child rights advocates are recommending that the age be raised from 12. The government has responded positively to it and legislation on the matter is ongoing. Likewise, the advocates would also like to see the minimum age of criminal responsibility raised higher than the current 15.