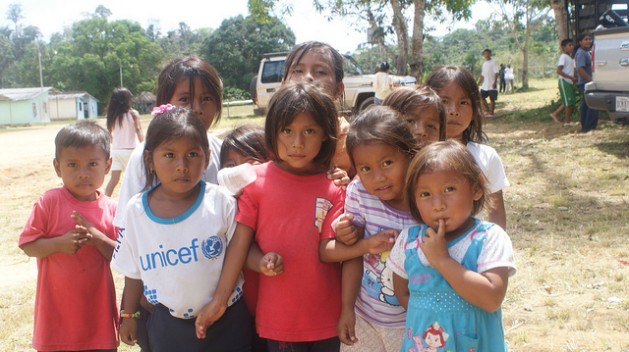 UNITED NATIONS, Nov 14 2014 (IPS) - Next week marks 25 years since the adoption of the Convention on the Rights of the Child, a historic commitment to children and the most widely accepted human rights treaty in history.

The CRC outlines universal rights for all children, including the right to health care, education, protection and the time and space to play. And it changed the way children are viewed, from objects that need care and charity, to human beings, with a distinct set of rights and with their own voices that deserve to be heard.

My career with UNICEF began the same year the CRC was adopted, and I have seen profound progress in children’s lives. Since 1989 the number of children who die before their fifth birthday has been reduced by nearly half. Pregnant women are far more likely to receive antenatal care and a significantly higher proportion of children now go to school and have clean water to drink.

We must celebrate these important achievements.

But this anniversary must also be used to critically examine areas of children’s lives that have seen far less progress and acknowledge that millions of children have their fundamental rights violated every day.

These crises and events are stunning in their scope and depravity, and in the depth of suffering our children endure. As upsetting as they are, they play out alongside acts of violence against children that happen everywhere and every day.

Twenty-five years after the adoption of the CRC, we clearly must do more to protect our children.

Our children endure a cacophony of violence too often in silence, and too often under an unspoken assumption that violence against children is to some degree tolerable.

Our children endure it in spite of overwhelming scientific evidence of the long-lasting physical, psychological, emotional, and social consequences they suffer well into adulthood because of such violence.

Our children endure it in spite of most countries’ national laws and international law and despite 25 years of the Convention on the Rights of the Child.

As we reflect on the last 25 years, we must also look forward and commit to doing things differently. Now, more than any other point in history, we have the knowledge and ability to protect our children, and with this ability comes the obligation to do so.

First, children need protection from the crises that play out in the public eye, like conflicts in Iraq, Syria, South Sudan and others.

We also need programmes that work at preventing and responding to the everyday, hidden violence. Initiatives like a programme in Turkey that reduced physical punishment of children by more than 70 percent in two years. Or child protection centres in Kenya that respond to thousands of cases every year. Or a safe schools programme in Croatia that cut the number of children being bullied in half.

Countries must also strengthen their child protection systems – networks of organisations, services, laws, and processes – that provide families with support so they can make sure children are protected.

And finally, as we approach the end of the Millennium Development Goals, world leaders must prioritise child protection as we look towards 2015 and beyond.

As a long-serving UNICEF official, and more importantly as a mother, I want for children everywhere what I want for my own daughter – a world where every child is protected from violence.

The 25th Anniversary of the Convention of the Rights of the Child provides an opportunity to recommit to the promise we made to children, and take the urgent action needed now to protect them from harm.