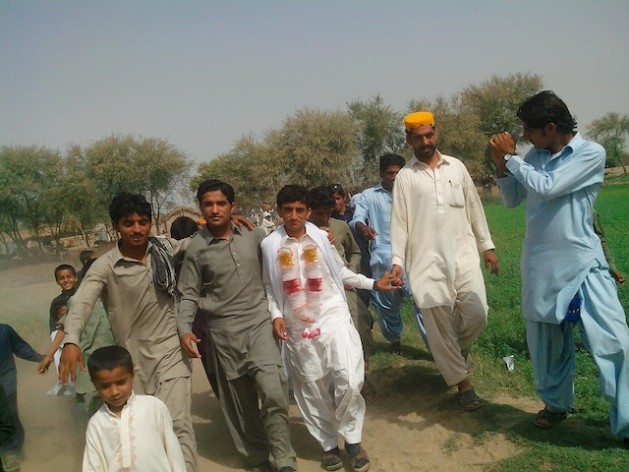 Seven percent of all young boys are married before the legal age in Pakistan. Credit: Irfan Ahmed/IPS

LAHORE, Jul 16 2014 (IPS) - At first glance, there is nothing very unusual about Muhammad Asif Umrani. A resident of Rojhan city located in Pakistan’s eastern Punjab province, he is expectantly awaiting the birth of his first child, barely a year after his wedding day.

A few minutes of conversation, however, reveal a far more complex story: Umrani is just 14 years old, preparing for fatherhood while still a child himself. His ‘wife’, now visibly pregnant, is even younger than he, though she declined to disclose her name and real age.

The young couple sees nothing out of the ordinary about their circumstances; here in the Rajanpur district of Punjab, early marriages are the norm.

Girls in rural areas are often given in marriage in order to settle disputes, or debts. Some are even ‘promised’ to a rival before they are born, making them destined to a life of servitude for their husband’s family. -- Sher Ali, a social activist in Rojhan city
Umrani’s father, a small-scale farmer, tells IPS he is “proud” to have married his son off and “brought home a daughter-in-law to serve the family.”

Similar sentiments echo all around this country of 180 million people where, according to the latest figures released by the Pakistan Demographic Health Survey (2012-2013), 35.2 percent of currently married women between 25 and 49 years of age were wed before they were 18.

According to the UNICEF Innocenti Research Centre, seven percent of all boys are married before the legal age in Pakistan.

Families like Umrani’s are either blissfully unaware of, or completely indifferent towards, domestic laws governing childhood unions.

Intazar Medhi, a lawyer based in Lahore, tells IPS that the Child Marriage Restraint Act of 1929 – which prohibits girls under the age of 16 and boys under the age of 18 from being legally wed – is one of the least invoked laws in the country.

While the Act is in force in every province, and was recently amended by the government of Sindh to increase the legal marriage age of both boys and girls to 18, it is hardly a deterrent to the deeply embedded cultural practice.

For one thing, violators are fined a maximum of 1,000 rupees (about 10 dollars), what many experts have called a “trifling sum”; and for another, the law doesn’t extend to the many thousands of ‘unofficial’ marriage ceremonies that take place around the country every day.

In a country where 97 percent of the population identifies as Muslim, few nikahs (marriage agreements under Islamic law) are registered with an official state authority.

Scores of married couples live together for years without any documentary evidence of their union, with many families preferring to avoid legal formalities.

It is thus nearly impossible for government officials to estimate just how many such ‘illegal’ unions are taking place, or to dissolve contracts that entail nothing more than the presence of a religious person and witnesses for the bride and groom.

Some advocates like Intezar believe the problem can be rectified by following the example of the Sindh province, whose amendment of the 1929 Act upped its punitive power to include a three-year non-bailable prison term and a 450-d0llar fine for offenders.

He thinks setting 16 as the official marriage age – the same age at which Pakistanis receive their Computerised National Identity Cards (CNICs) – will make it easier for law enforcement officials to take action against those responsible for marrying off young children.

The government, he says, must also take steps to ensure timely birth registrations as millions spend lifetimes without any documentary proof of their existence.

But for Sher Ali, a social activist based in the same city as Umrani’s family, a single law will not suffice to clamp down on a centuries-old practice that serves multiple purposes within traditional Pakistani society.

For instance, he tells IPS, girls in rural areas are often given in marriage in order to settle disputes, or debts. Some are even ‘promised’ to a rival before they are born, making them destined to a life of servitude for their husband’s family.

Various tribes also have different standards for determining an appropriate marriage age. For example, Sher explained, in some regions like the Southern Punjab, a girl is deemed ready for marriage and motherhood the day she can lift a full pitcher of water and carry it on her head.

In a country where the annual per capita income hovers at close to 1,415 dollars and 63 percent of the population lives in rural areas, girls are considered a burden and cash-strapped families try to get rid of them as early as possible.

When the Sindh government announced its plans to extend the marriage age, CII Chairman Maulana Muhammad Khan Sherani denounced the move as an effort to “please the international community [by going] against Islamic teachings and practices.”

Comprised of prominent religious scholars, the Council has repeatedly urged the parliament to refrain from setting a “minimum marriage age”. Though parliament is not legally bound to any suggestions made by the body, many allege that the extent of its political power renders any ‘advice’ a de facto order.

Indeed, repeated assertions by religious groups that puberty sanctions marriage has led to a situation in which girls between eight and 12 years, and boys in the 12-15 age bracket, find themselves husbands and wives, while their peers are still in middle-school.

Speaking to IPS over the phone from Malaysia, Dr. Javed Ahmed Ghamidi – who is known as a moderate and had to leave the country after receiving several death threats from extremists – said that since Islam does not specify an exact marriage age, it is up to the government to draft necessary laws to protect the rights of its citizens.

He fully supports the implementation of a law that only allows legal unions between people who are old enough to run a household and bring up children.

“Such laws are not at all in conflict with the teachings of the religion,” he insisted.

Qamar Naseem, programme coordinator of Blue Veins, an organisation working to eliminate child marriages, pointed out that such a law is not only a domestic duty but also an international obligation, since the United Nations Human Rights Council (UNHRC) adopted a resolution against child, early and forced marriages in 2013.

Supported by over 100 of the world body’s 193 members, the resolution recognises child marriage as a human rights violation and vows to eliminate the practice, in line with the organisation’s post-2015 global development agenda.

Various studies have documented the impact of child marriage on Pakistani society, including young girls’ increased vulnerability to medical conditions like fistula, and a massive exodus from formal education.

Experts say Pakistan has the highest school dropout rate in the world, with 35,000 pupils leaving primary education every single year, largely as a result of early marriages.

Slowly, thanks in large part to the tireless work of activists, the tide is turning, with more people becoming aware of the dangers of early marriages.

But according to Arshad Mahmood, director of advocacy and child rights governance at Save the Children-Pakistan, much more needs to be done.

He told IPS there is an urgent need for training and education of nikah registrars, police officers, members of the judiciary and media personnel at the district level in order to discourage child marriages.

Effective laws must be coupled with the necessary budgetary allocation to allow for implementation and enforcement, he added.

“People will have to be informed that child marriages are the main reason behind high maternal and newborn mortality ratios in Pakistan,” he concluded.