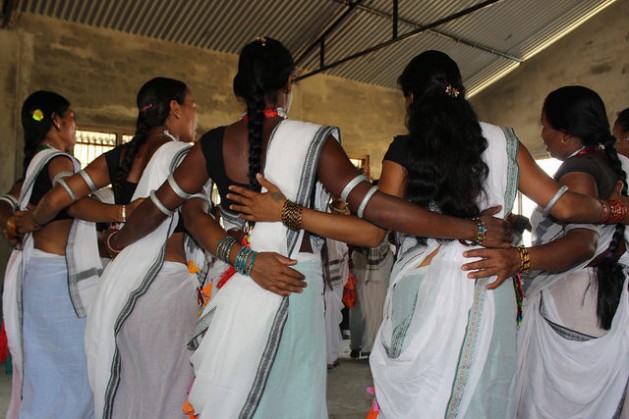 KARACHI, Pakistan, Jul 11 2014 (IPS) - If 22-year-old Rashda Naureen could go back six years in time, she would never have agreed to get married at the tender age of 16.

“Looking back, I know I was not ready for marriage,” she told IPS. “How could I have been, being merely a child myself?”

With only a third-grade education, Naureen became a mother at 17 and got a divorce soon after she delivered.

According to Naureen’s mother, Perween Bibi, who works for a small daily wage as a cleaning woman in Pakistan, “I have two more daughters [in addition to two sons] and we gave Rashda away in order to have one less responsibility on our hands.”

Nearly 7.3 million teenage girls become pregnant every year -- of these, two million are aged 14 or younger.
But the opposite turned out to be true. Today Bibi and her husband, who is a private chauffeur, must now find a way to provide for their grandson in a family of seven struggling to survive.

Perhaps the most unfortunate part of the story is that Naureen’s pregnancy could easily have been avoided.

“Before marriage my best friend urged me to take contraceptive pills, but I refused to listen to her,” Naureen confessed.

“Even my husband, who had been forced to marry me by his parents, said we should wait, but I didn’t pay any heed; I thought having a child immediately would cement our relationship, and my husband would begin to love me,” she said forlornly.

Dr. Tauseef Ahmed, Pakistan country director of Pathfinder International, a non-profit organisation working to improve adolescent and youth access to sexual and reproductive health services in more than 30 countries, says that early pregnancy is not uncommon among teenage brides.

In fact, having a baby is a way of proving one’s fertility, and the values of adolescent pregnancy are “protected by women and girls themselves,” he told IPS.

According to the United Nations Population Fund (UNFPA), nearly 7.3 million teenage girls become pregnant every year — of these, two million are aged 14 or younger. Meanwhile, an estimated 70,000 adolescents in developing countries die each year from complications during pregnancy and childbirth.

The World Health Organisation (WHO) says stillbirths and newborn deaths are 50 percent more likely among infants of adolescent mothers than among mothers aged 20 to 29.

Infants who survive are more likely to have a low birth weight and be premature than those born to women in their 20s.

The problem is particularly pronounced in Pakistan, a country of 180 million people where 35 percent of married women between the ages of 25 and 49 years were wed before the age of 18, according to the latest figures in the 2012-2013 Pakistan Demographic Health Survey.

Experts say one of the main reasons behind the widespread occurrence of chid marriages and early pregnancies is a lack of education.

Naureen agrees, saying her disrupted education stands out as a glaring “missing link” in her early development

Dr. Farid Midhet, who heads the USAID’s flagship Maternal and Child Health Integrated Programme (MCHIP) in Pakistan, says there is a strong link between teenage pregnancy and female illiteracy.

“Together these contribute to high infant and child mortality and morbidity, high fertility, illiteracy in general, and production of children who are a burden on society,” he told IPS.

He added that this exacerbates poverty, which in turn fuels a vicious cycle of militancy, crime and social unrest.

Pathfinder International’s Ahmed believes a strong conservative current in Pakistani society – where 97 percent of the population identifies as Muslim – also conspires against the girl child, making early marriage and adolescent pregnancy a foregone conclusion for thousands of girls.

“Early marriage and not getting permission to attend school are the two main indicators of conservative forces here,” he stressed, adding that the “fear of backlash from conservative forces” has resulted in a glaring lack of positive initiatives within the public sector to tackle the problem.

This, despite the fact that study after study has shown that countries that improve school enrollment rates for girls also see a decline in adolescent child-bearing.

Asked how to tackle the health crisis caused by teenage motherhood, Zeba Sathar, country director of the Population Council of Pakistan, answered immediately that she would first and foremost invest in girls’ education.

The phenomenon is not exclusive to Pakistan, with several other countries in the region experiencing equally challenging situations.

Most South Asian nations, like Pakistan, struggle with the twin problems of early marriage and teenage pregnancy, making it crucial to tackle both simultaneously, experts say.

But this is easier said than done, as laws surrounding the ‘official’ marriage age are difficult to enforce and complicated by traditional societal values.

According to a 2013 report by the UNFPA entitled ‘Motherhood in Childhood’, India and Bangladesh remain among the countries where a girl is most likely to be married before she is 18.

Pakistan and Sri Lanka, on the other hand, show much lower rates of pregnancies among women aged 15 to 19.

The U.N. Department of Economic and Social Affairs (UNDESA)’s World Population Prospects report states that the adolescent fertility rate among women in the 15-19 age group is 87 per 1,000 women in Afghanistan, 81 in Bangladesh, 74 in Nepal, 33 in India, 27 in Pakistan, and just 17 in Sri Lanka.

India’s eastern state of Bihar had the worst score card for child marriage. Referring to a survey of more than 600,000 households conducted for India’s health ministry between 2007 and 2008, Sathar said nearly 70 percent of women in their early twenties reported having been married by the age of 18.

But numbers, according to Ahmed, do not tell the whole story.

“Early childhood marriages and fertility rates may be four times higher in Bangladesh than in Pakistan, but the former experiences higher aspirations [among women] for better education and gainful employment than Pakistan,” he stated.

Additionally, the percentage of women in secondary education in Bangladesh was 55, while in Pakistan it was just 29.

For women like Naureen, staying in school could have spared her a lifetime of pain.

“I would not have been married and become a mother at such a young age; I would have had time to think about what I was getting myself into… I would have been just a little bit wiser,” she said.