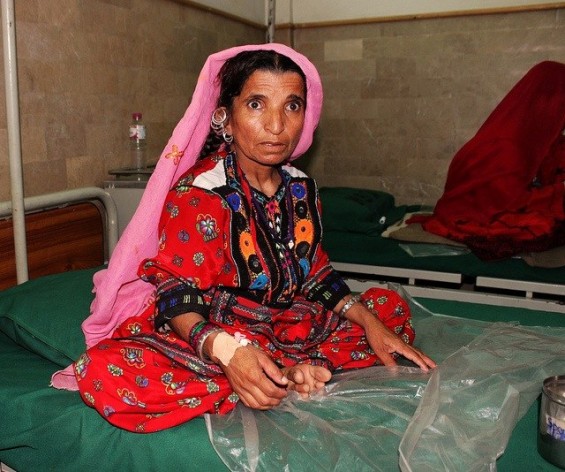 KARACHI, Jun 17 2014 (IPS) - The word on the street was that if there were one place on earth that could treat Mohammad Lalu’s wife, it would be the Koohi Goth Women’s Hospital in Pakistan’s port city of Karachi.

The 50-year-old stone crusher hailing from the remote village of Dera Bugti in the southwest Balochistan province had spent 30 years searching for a facility that would treat his wife, Naz Bibi, who suffers from obstetric fistula.

Sitting upright on a plastic sheet draped over one of the hospital beds, Bibi told IPS, “It took us two days of non-stop travel to get here and we spent 12,000 rupees (roughly 120 dollars) on the bus fare alone.”

It is a princely sum for a family of extremely modest means, in a country where the average income is less than 1,200 dollars a year. But for Lalu and his wife, the expenditure will be worth it if it can cure Bibi of her terrible affliction.

While country-specific data is harder to find, local experts suggest that anywhere from 4,000 to 5,000 women in Pakistan are suffering from fistula.

Caused by prolonged or stressful labour, the condition arises when the baby’s head puts undue pressure on the lining of the woman’s birth canal, eventually ripping through the wall of the rectum or bladder and resulting in urinary or faecal incontinence.

Medial professionals say young women, whose bodies have not yet matured enough to endure the birthing process, are most vulnerable, as well as those who lack adequate nutrition or live too far away from modern healthcare facilities.

Because fistula causes a woman to lose control over her bodily functions, there is a huge stigma around the condition. Those afflicted by it often smell bed, and are sequestered away from their communities and families, forced to suffer in silence.

This is particularly traumatic for young mothers, who end up spending the better parts of their lives having little to no contact with the outside world.

Lalu told IPS that Bibi’s trouble started soon after she delivered a stillborn baby boy when she was just a teenager during her first marriage.

“I am her second husband,” he said. “Her parents married her to me after her husband left her, but did not disclose she was suffering from this dreadful problem.”

Unlike many other husbands, Lalu did not turn away from his new wife; instead, he has gone to great lengths to find her the necessary treatment. This hasn’t been easy, since fistula can only be managed through reconstructive surgery, which is cost-prohibitive for thousands of women.

Koohi Goth is one of 12 centres set up under the United Nations Population Fund’s (UNFPA) Fistula Project that offers the service for free.

Now in its eighth year, and assisted by the Pakistan National Forum on Women’s Health (PNFWH), it has trained 38 doctors to carry out the surgery. These numbers, experts say, pale in comparison to the scale of Pakistan’s maternal health crisis.

According to the country’s latest Demographic and Health Survey, 276 women out of every 100,000 die during childbirth.

“All these deaths are 100 percent preventable if we can provide quality of care and stop child marriages,” Dr. Sajjad Ahmed, head of the Fistula Project in Pakistan, told IPS.

He believes that delaying the age at which a woman experiences her first pregnancy would be a huge step forward in preventing conditions like fistula.

According to the UNFPA, “For both physiological and social reasons, mothers aged 15-19 are twice as likely to die of childbirth than those in their 20s. Obstructed labour is especially common among young, physically immature women giving birth for the first time.”

But changing the mindset that sees nothing wrong with the idea of a child bride will not be easily accomplished, especially in rural Pakistan.

Thirteen-year-old Shahbano, hailing from the village of Sanghar in Pakistan’s Sindh province, occupies the bed next to Bibi. She tells IPS she was married at 11 and developed fistula three weeks ago, during prolonged labour involving her first child.

Luckily, both Shahbano and her baby son survived the ordeal, but she must now hope that her surgery goes well, so she is not afflicted by incontinence for the rest of her life.

“In our culture, when a girl first begins to menstruate, her parents are obliged to marry her off,” Shahbano’s husband, Abid Hussain, told IPS.

Neither he nor his teenage wife had any idea that the Sindh provincial assembly passed the Child Marriage Restraint Act last month, prohibiting the marriage of children under 18 years of age. Violation of the bill could earn offenders a three-year prison term or a 450-dollar fine.

In 1929, the official marriage age stood at 14 years, and in 1965 the law changed, making it illegal to marry anyone under the age of 16. Today, Sindh is the only province to have recognised 18 as the bare minimum age for marriage – a decision that has elicited vehement opposition from religious groups.

Maulana Muhammad Khan Sherani, chairman of the Council of Islamic Ideology, which acts as an unofficial parliamentary advisor, said in reference to the amendment: “Some people want to please the international community [by going] against Islamic teachings and practices.”

“Such proclamations act as a spanner in our fight against early marriage and early pregnancy,” Ahmed asserted.

He says if he could give girls like Shahbano one piece of advice it would be to educate their children, especially their daughters.

“It will take a generation to put things right, but education will automatically bring about a cultural change, which could delay marriages. I see that as the only way to eradicate this condition,” he stressed.

Currently, the country only has the capacity to handle 2,000 cases of fistula, but doctors end up treating just 500 to 600 women a year.

Ahmed says this is largely due to the fact that people do not know the condition is preventable or treatable, and so avoid seeking out medical assistance. Many women live in rural areas without access to televisions, radios or cell phones, making it hard to spread awareness.

“We have a huge brigade of almost 100,000 lady health workers,” Ahmed said. Although they cover just 60 percent of the country, they act as a bridge between rural populations and urban-based care providers.

Perhaps these sustained efforts will enable Pakistan to see the day when conditions like fistula are nothing but a distant memory.