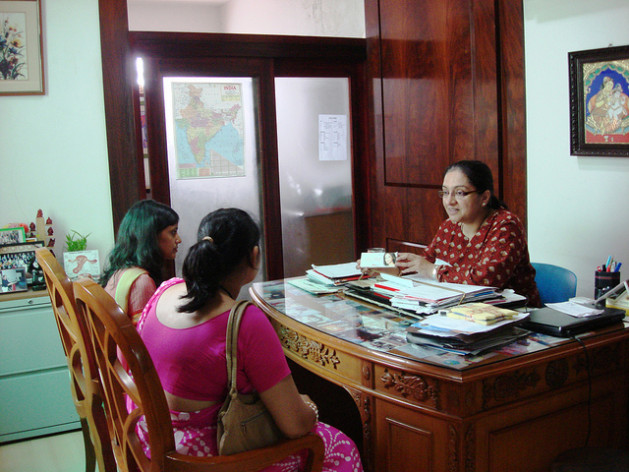 About 99 percent of patients with obstetric fistula cannot afford to pay their doctors. Credit: Jugran Bahuguna/IPS

KARACHI, May 27 2013 (IPS) - Sherhshah Syed is a highly qualified doctor and president of the prestigious Pakistan National Forum on Women’s Health (PNFWH) but his income does not match his qualifications.

He often spends long hours treating women with obstetric fistula, a severe reproductive health condition arising during childbirth that primarily affects women and girls who have no access to even the most basic medical care.

But since fistula is considered to be “the poor woman’s” disease, few of his patients can afford to pay him for his labour.

Dr. Sajjid Ahmed, who heads a PNFWH fistula project, tells IPS with a smile, “More than 99.9 percent of (our) patients are so poor, all they can offer us in exchange for giving them a new life is gratitude and an embroidered handkerchief.”

Labelled an “entirely preventable condition” by the international medical community, fistula develops during prolonged labour, “when the baby’s head puts pressure on the lining of the birth canal and eventually (rips) through the wall of the rectum and bladder, resulting in urinary or faecal incontinence,” Syed told IPS.

The condition is rarely found in the developed world but is common in many Asian and African countries, affecting an estimated three million women, according to the World Health Organisation (WHO).

The fact that there are no country-specific statistics available for Pakistan is indicative of the indifference and stigma that surrounds the ailment.

Syed made a “conservative” guess that anywhere between 5,000 and 6,000 women in Pakistan are suffering from the condition, which can only be treated through reconstructive surgery.

“While we are able to (treat) 1,000 women each year, there are many more who suffer silently,” he said, attributing this silence to a sense of shame, a culture that does not allow women to make decisions about their own bodies and a lack of awareness among health practitioners.

Some experts blame this on flaws in medical colleges’ curricula. Dr. Qazi M. Wasiq, general secretary of the Sindh chapter of the Pakistan Medical Association (PMA), says colleges are “out of touch” with the needs of the country and the community.

“We train our young doctors to serve in countries like the United States, the United Kingdom and the Middle East, where fistula is non-existent. Most students have only a bookish knowledge of the condition, with hardly (any awareness) of the debilitating details.”

This oversight has heavy ramifications in Pakistan, a hotbed of maternal and infant mortality. According to official statistics in the Pakistan Demographic and Health Survey of 2007, the last time such data were gathered, the maternal mortality rate (MMR) of 276 per 100,000 live births is one of the highest in the region.

In comparison, according to the WHO, the MMR is 35 in Sri Lanka, 170 in Nepal, 200 in India and 240 in Bangladesh. Many other countries in South Asia are showing signs of progress, but Pakistan’s MMR has remained virtually unchanged since 1991.

The vast majority of these fatalities occur in the countryside, where women have little or no access to basic care. Most qualified female gynaecologists are reluctant to take up posts in remote rural areas, particularly in provinces like Balochistan and the northwestern Khyber Pakhtunkhwa (KP), according to PMA’s Wasiq.

For years, Syed and his colleagues have urged the government to invest in providing basic emergency obstetric care by deploying trained birth attendants into rural areas to advise families against early child marriage, one of the leading causes of fistula.

According to Syed, dispatching an additional 400,000 nurses, paramedics and midwives to some 80,000 villages across Pakistan would have a huge impact on maternal mortality rates.  So far, however, there only 148 schools training 28,000 midwives.

With no official monitoring of the situation, women who develop conditions like fistula have to rely on concerned relatives to take action on their condition.

Ahmed says it is always mothers, fathers and brothers who accompany fistula patients to treatment centres – rarely, if ever, do husbands or in-laws volunteer to deal with the condition.

In 2006, the PNFWH in collaboration with the United Nations Population Fund (UNFPA) started the Fistula Prevention and Treatment Project with the aim of providing free treatment services to fistula patients all over the country, and training service providers.

On May 23, the UNFPA marked the first-ever International Day to End Obstetric Fistula, with the aim of building on local efforts to raise awareness of a condition that is not “understood even in societies where it is prevalent.”

In the eight years since the UNFPA project began, 13 fistula repair centres have been set up across Pakistan, all in government hospitals; but trained doctors, who currently number about three dozen, have not increased proportionately.

Ahmed says building an adequate medical force to deal with the problem requires commitment, compassion and sensitivity without the expectation of anything in return.

“Then again,” said Syed, “not everyone is mad enough to spend hours on something that earns you prayers but no economic benefits.”

Medical practitioners tell IPS that an obstetrician’s salary in a government hospital is anywhere from 600 to 1,000 dollars per month. In comparison, those with private practices earn the same by performing just one caesarian section.