GUATEMALA CITY, Apr 6 2012 (IPS) - Teenage pregnancies are on the rise in Guatemala, along with the drop-out rate in schools, family breakdown and many other related social ills. 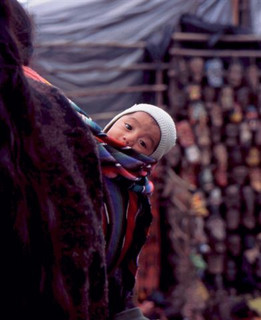 More and more girls in Guatemala are having babies. Credit: Fiat Luxe/CC BY-ND 2.0

A long list of factors contribute to early motherhood, ranging from lack of sex education to the influence of the Catholic Church’s ban on contraceptive use, and impunity for statutory rape, according to Mirna Montenegro of the Sexual and Reproductive Health Observatory, a local NGO.

“Imagine! In 2011 there were 21 babies born to 10-year-old girls! What’s more, we have no social protection system for them,” she told IPS.

“We are one of the few countries where there are so many pregnancies among 10 to 14-year-old girls. In 2011 alone there were 3,046 births to such young mothers in Guatemala,” she said. “Pregnancy in an underage girl is the product of statutory rape, so logically there should be an equal number of court prosecutions under way, but this is not so,” she complained.

Montenegro said the Guatemalan justice system finds it problematic to punish offenders in these cases. “The younger the victim, the closer the family ties between herself and the rapist,” she said.

The Catholic Church’s opposition to using birth control methods and to a comprehensive approach to sexuality that includes avoiding unplanned pregnancy and sexually transmitted diseases is also a hurdle, Montenegro said. “It affects the development of attitudes within the family,” she said.

The Health and Education Ministries signed a cooperation agreement in 2010 to implement programmes to prevent unwanted pregnancies in the six provinces with the highest HIV/AIDS incidence, maternal mortality rates and other indicators of concern.

“Progress has been made in raising the awareness of teachers, developing teaching materials and learning modules, and analysing the context of the situation in the provinces. But these things have not yet reached classrooms, as they are bogged down in provincial and ministerial head offices,” Montenegro said.

The Family Planning Law, regulations for which were adopted in 2009, brought sex education into primary schools and facilitated access to contraceptive methods. The following year the Healthy Maternity Act was approved, which obliges health authorities to provide basic services and care before, during and after pregnancy.

But the new laws have not been successful in curbing teen pregnancies.

One out of five Guatemalan mothers are aged between 10 and 19, the highest adolescent fertility rate in Latin America, according to a 2011 study on the state of the world’s girls, titled “Because I Am a Girl: So, What About Boys?” by Plan International, a child protection agency.

Cecilia Fajardo, a psychologist with the Family Welfare Association of Guatemala (APROFAM), told IPS, “We are still taught that women’s role is to be wives and mothers, which is our right, but we are not told about other avenues of self-improvement.”

Fajardo said there could be more child and teen pregnancies than those reported by the Health Ministry, since “many of the births take place at home, or pregnancies are terminated without the authorities’ knowledge.”

To help teenagers, APROFAM has created innovative programmes in schools for young people of both sexes to come to grips with practical aspects of pregnancy, fatherhood and motherhood, using aids like the electronic baby and the pregnancy simulator.

“The pregnancy simulator is a strap-on garment with an enlarged bust and belly weighing 25 pounds (11 kilograms), the average weight gain a woman experiences in pregnancy. It enables teenagers to experience 26 different signs and symptoms of pregnancy,” Fajardo described.

The electronic baby is a computerised infant-sized doll that mimics the behaviour of a newborn, including crying to signal that it is hungry or tired.

“We give young girls these experiences to give them knowledge about sexuality and reproductive health. We do not impose on them the idea that they should not be mothers,” Fajardo said.

This impoverished Central American country of 14 million people has an adolescent (under-20) birth rate of 114 per 1,000 women in rural areas, according to the National Mother and Child Health Survey for 2008-2009.

Silvia Maldonado of the National Alliance of Indigenous Women’s Organisations for Reproductive Health (ALIANMISAR) told IPS that dropping out of school, malnutrition and discrimination are among the consequences of teen pregnancies.

She said education was one of the most important factors for the prevention of adolescent pregnancy, which severely curtails life opportunities for thousands of teenagers and creates the phenomenon of “kids having kids.”

“It is essential to talk about sexuality in schools, and for parents to talk to their children in depth about this issue in order to prevent more teen pregnancies,” Maldonado said.