Tapping Boys in the Struggle for Girls’ Equal Rights

UNITED NATIONS, Sep 22 2011 (IPS) - Brothers, husbands, boyfriends and fathers are key actors in the creation of a world where girls enjoy the same rights as boys, and will themselves benefit from greater gender equality, stresses a new report from Plan International released Thursday. 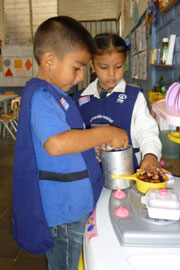 Children play in the kitchen corner of one of El Salvador's gender-neutral preschools. Credit: Courtesy of Plan International

Plan International (Plan) is an independent children’s development organisation that works in 50 developing countries in Africa, Asia and the Americas to promote child rights and to end child poverty.

The report features the story of Nixon Otieno Odoyo, a teenager living in Nairobi who helped launch a campaign to provide female students with free sanitary napkins.

Odoyo’s father left the family when he was three. His mother had no money to provide for the children, and his sister no longer attends school because she got married when she was 15 and now has four children.

Odoyo says that when he first started school, there were a lot of girls in his class. But now that he is 16, there are only two girls left. One is having a baby soon, and might not continue.

Wanting to do something, he joined the Teens’ Watch Club, founded by the Daretti Youth Network, which gives students from schools across Nairobi the opportunity to discuss issues that affect teens.

In those discussions, girls told him that they didn’t feel comfortable in school when they were having their menstrual cycle, and couldn’t concentrate because they didn’t have the money to buy sanitary napkins and consequently missed school.

Odoyo and other members of the club raised 50,000 Kenyan shillings, and used it to buy 1,000 sets of sanitary napkins that were given to 500 girls in 10 schools in the slums across Nairobi.

Sarah Hendriks, the global gender adviser for Plan International and a researcher for the annual report, this year titled “So, What About Boys?”, says the most important conclusion it draws is that “everyone can benefit from turning the aspiration of gender equality into reality”.

“Boys and men are hurt because of traditional notions of masculinity,” she said, adding that “stereotypical views and rigid gender roles can rob both girls and boys of the opportunity to fully realise their potential.”

The report offers an eight-step action plan for policy-makers that emphasises the importance of starting gender sensitivity training at a young age, with pre-school initiatives to promote equality between girls and boys, and educational curriculum that addresses stereotypes.

In El Salvador, for example, Plan is working on a two-year-old project that involves 56 daycares with gender-neutral policies.

In Cabañas, in northern El Salvador, four-year old Samuel is free to play with dolls as well as cars, and he already knows his way around the stove.

Plan and the teachers also try to involve the parents, talking with them about using “non-sexist language” and challenging traditional expectations for girls’ and boys’ behaviour.

Plan is collaborating with the government of El Salvador to change school curricula and to develop a national gender policy for early years.

The report says one of the main the challenges in changing rigid gender stereotypes and getting boys and men engaged in the fight for gender equality is that public policies often “reinforce traditional stereotypes of men and boys, and portray male youth as problematic,” and “most policies on gender issues make no mention of masculinities, or engaging man and boys as both as both beneficiaries and power brokers.”

Plan’s researchers conducted interviews with 4,000 children and teens ranging in age from 12 to 18. They found that in many countries, families and educators are “handing inequalities down through the generations”, including the acceptance of physical abuse as a cultural norm.

For example, 65 percent of respondents from India and Rwanda totally or partially agreed with the statement, “A woman should tolerate violence in order to keep her family together.”

But the researchers also found that “children are happier when they see their parents sharing household responsibilities”, and when “dads cook and do the laundry, both parents make decisions and when their mum spends their time in and out of the home.”

Still, over 60 percent of children interviewed in India for the report also agreed that, “If resources are scarce, it is better to educate a boy instead of a girl.”

In the foreword to the report, former Brazilian president Fernando Henrique Cardoso stresses that fathers in particular have a key role to play in leaving old “machismo” ideas behind.

“I call on all men and boys to throw their weight behind the campaign for equality and to challenge those who oppose women’s rights and equality,” he said.

“The complementary skills and qualities of both men and women are needed to tackle the enormous challenges we face. This will not be easy. But we will all gain from such changes. Societies with greater equality between men and women, girls and boys, are healthier, safer, more prosperous and more truly democratic,” he said.