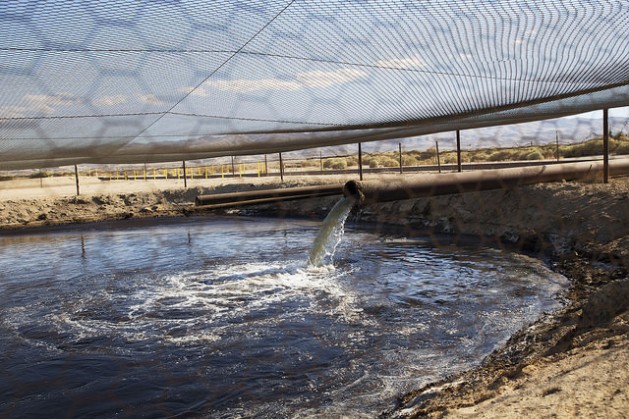 Fracking fluid and other drilling wastes are dumped into an unlined pit located right up against the Petroleum Highway in Kern County, California. Credit: Sarah Craig/Faces of Fracking

WASHINGTON, Dec 1 2014 (IPS) - Multinational oil and gas companies are engaged in a quiet but broad attempt to prepare the groundwork for a significant global expansion of shale gas development, according to a study released Monday.

Thus far, the hydraulic fracturing (or “fracking”) technologies that have upended the global gas market have been used primarily in North America and, to a lesser extent, Europe. With U.S. gas production in particular having expanded exponentially in recent years, however, countries around the world have started exploration to discern whether they, too, could cash in on this new approach.

Argentina has put in place a new law guaranteeing a minimum price for fracked gas. Further, this minimum price is some 250 percent higher than the previous valuation – a sweetheart guard against the bottomed-out prices that are currently impacting on gas production in the United States.

According to an estimate published last year by the U.S. Energy Information Administration, some 90 percent of the world’s shale gas could be found outside of the United States – an incredibly lucrative potential. “It’s likely there will be a revolution,” Maria van der Hoeven, the executive director at the Paris-based International Energy Agency, has said.

Yet according to the new study, from Friends of the Earth Europe, a watchdog group, only Brazil has strengthened its regulatory regime in anticipation of this expansion. Of the nearly dozen countries the new report looks at, most are doing the opposite.

“Under pressure from the fossil fuel industry – which has deep pockets and promises employment and investment – several governments have already started to weaken their environmental legislation, alter their tax regimes and put in place industry-friendly mining licensing and production processes, in order to attract foreign investors and expertise,” the report states. “This is often at the expense of the public interest.”

In terms of production this remains a nascent industry. Nonetheless, neither governments nor companies appear to have undertaken efforts to guard against the complexities that will arise, including around the potential for social, environmental and even political tensions.

“The industry is trying to change the legislation in those places where they want to operate, to try to repeat as much as possible the favourable policies we’ve seen in U.S. energy policy,” Antoine Simon, a shale gas campaigner with Friends of the Earth Europe and lead author on the new report, told IPS.

“The key here is to ensure that the legal frameworks are as friendly for the industry as possible. That’s the first phase of this global strategy, and we’re seeing it in each country we studied.”

Outside of North America and Europe, Argentina has moved forward the quickest on shale gas development, and thus offers a key example on legislative action for which companies may be looking.

For instance, Argentina has put in place a new law guaranteeing a minimum price for fracked gas. Further, this minimum price is some 250 percent higher than the previous valuation – a sweetheart guard against the bottomed-out prices that are currently impacting on gas production in the United States.

Simon says this law has a telling nickname in Argentina – the “Chevron Decree”, a reference to the U.S. oil and gas company. The day after the law was passed, he notes, Argentina’s main state-backed oil and gas producer signed a long-term production deal with Chevron.

Other countries have put in place favourable new tax policies for oil and gas investors. In Morocco, for instance, producers will be exempt from corporate taxes for the first decade of operation, while Russia has created similar policies for oil production over the next 15 years.

Yet the lack of action to simultaneously put in place environmental or social safeguards in most countries runs a variety of risks, Friends of the Earth Europe and others warn. Hydraulic fracturing requires massive amounts of water, for instance – up to 26 million litres per drill site.

The new report finds that a significant proportion of shale gas reserves around the world are located in areas that are already experiencing significant water shortages and even related violence. Likewise, many of these shale basins are beneath major cross-border aquifers.

Even before these issues are addressed by national governments, then, the oil and gas industry could gain influence in setting policy on the notoriously contentious issue of freshwater use.

Alongside concerns about the local impact of shale gas development is a broader lack of clarity today on the extent to which developing countries would be able to benefit from any new gas-related revenues. Thus far, only Brazil has specifically addressed this issue.

“In our research, Brazil was the only exception in terms of passing legislation that ensured they would get some significant revenues,” Simon says. “Really that doesn’t seem to be happening in other countries, where instead we’re seeing a lot of legislation that offers state aid to push investors to come to their countries.”

Beyond a few notable exceptions in Latin America and South Africa, Simon suggests that this issue has not yet seen significant opposition by civil society. Still, advocacy groups do point to a growing trend of global understanding and mobilisation on fracking concerns.

“The movement to ban fracking has resulted in hundreds of local communities taking action to stop fracking, several states and countries instituting moratoriums, and the movement continues to grow.”

In October, Food & Water Watch organized an international day of action to ban hydraulic fracturing. Hauter notes that the event featured “over 300 actions in 34 countries, from Australia to Argentina, even Antarctica, calling for a ban on fracking”.

Food & Water Watch reports that France and Bulgaria have already banned hydraulic fracturing, while local moratoriums have also been passed by hundreds of communities across the Netherlands, Spain and Argentina.

Meanwhile, the drivers behind fracking-related pressures are not simply multinational companies and national governments keen on investment. It was in the United States where hydraulic fracturing was invented and proved its potential, and today the U.S. government is reportedly taking a central role in promoting these techniques worldwide.

In almost all of the countries studied for the new report, researchers found the development of shale gas to be “closely linked” to a U.S. government agency, the U.S. Unconventional Gas Technical Engagement Program (UGTEP). Housed within the U.S. State Department, since 2010 the UGTEP has engaged in a wide variety of technical assistance around gas development.

“Governments often have limited capability to assess their own country’s unconventional gas resource potential or are unclear about how to develop it in a safe and environmentally sustainable manner,” UGTEP explains on its website. “The ultimate goals of UGTEP are to achieve greater energy security by supporting the development of environmentally and commercially sustainable frameworks.”

“Through UGTEP, the US is also actively engaged in re-shaping existing foreign legal regulations to create the desired legal framework for the development of shale oil and gas in the targeted countries.”