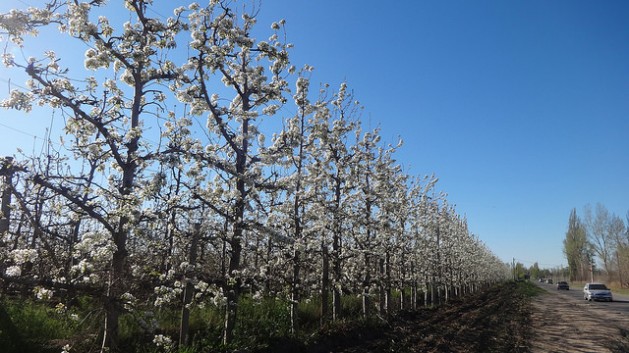 Pear trees in bloom on a farm in Allen, in the Argentine province of Río Negro, across from a “tight gas” deposit. Pear growers are worried about their future, now that the production of unconventional fossil fuels is expanding in the area. Credit: Fabiana Frayssinet/IPS

AÑELO, Argentina, Oct 8 2014 (IPS) - Unconventional oil and gas reserves in Vaca Muerta in southwest Argentina hold out the promise of energy self-sufficiency and development for the country. But the fracking technique used to extract this treasure from underground rocks could be used at a huge cost.

The landscape begins to change when you get about 100 km from Neuquén, the capital of the province of the same name, in southwest Argentina. In this area, dubbed “the Saudi Arabia of Patagonia”, fruit trees are in bloom and vineyards stretch out green towards the horizon, in the early southern hemisphere springtime.

But along the roads, where there is intense traffic of trucks hauling water, sand, chemicals and metallic structures, oil derricks and pump stations have begun to replace the neat rows of poplars which form windbreaks protecting crops in the southern region of Patagonia.

“That water is not left in the same condition as it was when it was removed from the rivers; the hydrologic cycle is changed. They are minimising a problem that requires a more in-depth analysis.” -- Carolina García

It is located in Vaca Muerta, a geological formation in the Neuquén basin which is spread out over the provinces of Neuquén, Río Negro and Mendoza. Of the 30,000 sq km area, the state-run YPF oil company has been assigned 12,000 sq km in concession, including some 300 sq km operated together with U.S. oil giant Chevron.

Vaca Muerta has some of the world’s biggest reserves of shale oil and gas, found at depths of up to 3,000 metres.

A new well is drilled here every three days, and the demand for labour power, equipment, inputs, transportation and services is growing fast, changing life in the surrounding towns, the closest of which is Añelo, eight km away.

“Now I can provide better for my children, and pay for my wife’s studies,” said forklift operator Walter Troncoso.

According to YPF, Vaca Muerta increased Argentina’s oil reserves ten-fold and its gas reserves forty-fold, which means this country will become a net exporter of fossil fuels.

But tapping into unconventional shale oil and gas deposits requires the use of a technique known as hydraulic fracturing or “fracking” – which YPF prefers to refer to as “hydraulic stimulation”.

According to the company, the technique involves the high-pressure injection of a mix of water, sand and “a small quantity of additives” into the parent-rock formations at a depth of over 2,000 metres, in order to release the trapped oil and gas which flows up to the surface through pipes. 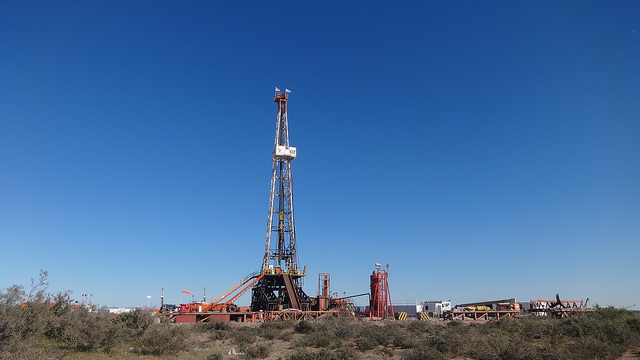 The extraction of unconventional fossil fuels at the YPF deposit in Loma Campana has already begun to irrevocably affect life in the surrounding areas. Credit: Fabiana Frayssinet/IPS

Víctor Bravo, an engineer, says in a study published by the Third Millennium Patagonia Foundation, that some 15 fractures are made in each well, with 20,000 cubic metres of water and some 400 tons of diluted chemicals.

The formula is a trade secret, but the estimate is that it involves “some 500 chemical substances, 17 of which are toxic to aquatic organisms, 38 of which have acute toxic effects, and eight of which are proven to be carcinogenic,” he writes. He adds that fracking fluids and the gas itself can contaminate aquifers.

Neuquén province lawmaker Raúl Dobrusin of the opposition Popular Union bloc told Tierrámerica: “The effect of this contamination won’t be seen now, but in 15 or 20 years.”

During Tierramérica’s visit to Loma Campana, Pablo Bizzotto, YPF’s regional manager of unconventional resources, played down these fears, saying the parent-rock formations are 3,000 metres below the surface while the groundwater is 200 to 300 metres down.

“The water would have to leak thousands of metres up. It can’t do that,” he said.

Besides, the “flowback water”, which is separated from the oil or gas, is reused in further “hydraulic stimulation” operations, while the rest is dumped into “perfectly isolated sink wells,” he argued. “The aquifers do not run any risk at all,” he said.

But Dobrusin asked “What will they do with the water once the well is full? No one mentions that.”

According to Bizzotto, the seismic intensity of the hydraulic stimulation does not compromise the aquifers either, because the fissures are produced deep down in the earth. Furthermore, he said, the wells are layered with several coatings of cement and steel.

“We want to draw investment, generate work, but while safeguarding nature at the same time,” Neuquén’s secretary of the environment, Ricardo Esquivel, told Tierramérica.

In his view, “there are many myths” surrounding fracking, such as the claim that so much water is needed that water levels in the rivers would go down.

Neuquén, he said, uses five percent of the water in its rivers for irrigation, human consumption and industry, while the rest flows to the sea. Even if 500 wells a year were drilled, only one percent more of the water would be used, he maintained.

But activist Carolina García with the Multisectorial contra el Fracking group told Tierrámerica: “That water is not left in the same condition as it was when it was removed from the rivers; the hydrologic cycle is changed. They are minimising a problem that requires a more in-depth analysis.”

She pointed out that fracking is questioned in the European Union and that in August Germany adopted an eight-year moratorium on fracking for shale gas while it studies the risks posed by the technique.

YPF argues that these concerns do not apply to Vaca Muerta because it is a relatively uninhabited area.

“The theory that this is a desert and can be sacrificed because no one’s here is false,” said Silvia Leanza with the Ecosur Foundation.

“There are people, the water runs, and there is air flowing here,” she commented to Tierramérica. “The emissions of gases and suspended dust particles can reach up to 200 km away.”

Nor does the “desert theory” ring true for Allen, a town of 25,000 people in the neighbouring province of Río Negro, which is suffering the effects of the extraction of another form of unconventional gas, tight gas sands, which refers to low permeability sandstone reservoirs that produce primarily dry natural gas.

In that fruit-growing area, 20 km from the provincial capital, the fruit harvest is shrinking as the number of gas wells grows, drilled by the U.S.-based oil company Apache, whose local operations in Argentina were acquired by YPF in March.

“Going around the farms it’s easy to see how the wells are occupying what was fruit-growing land until just a few years ago. Allen is known as the ‘pear capital’, but now it is losing that status,” lamented Gabriela Sepúlveda, of APCA Allen-Neuquén.

A well exploded in March, shaking the nearby houses. It wasn’t the first time, and it’s not the only problem the locals have had, Rubén Ibáñez, who takes care of a greenhouse next to the well, told Tierramérica. “Since the wells were drilled, people started feeling dizzy and having sore throats, stomach aches, breathing problems, and nausea,” he said.

“They periodically drill wells, a process that lasts around a month, and then they do open-air flaring. I’m no expert, but I feel sick,” he said. “I wouldn’t drink this water even if I was dying of thirst….when I used it to water the plants in the greenhouse they would die.”

The provincial government says there are constant inspections of the gas and oil deposits.

“In 300 wells we did not find any environmental impact that had created a reason for sanctions,” environment secretary Esquivel said.

“We have a clear objective: for Loma Campana, as the first place that unconventional fossil fuels are being developed in Argentina, to be the model to imitate, not only in terms of cost, production and technique, but in environmental questions as well,” Bizzotto said.

“All technology has uncertain consequences,” Leanza said. “Why deny it? Let’s put it up for debate.”